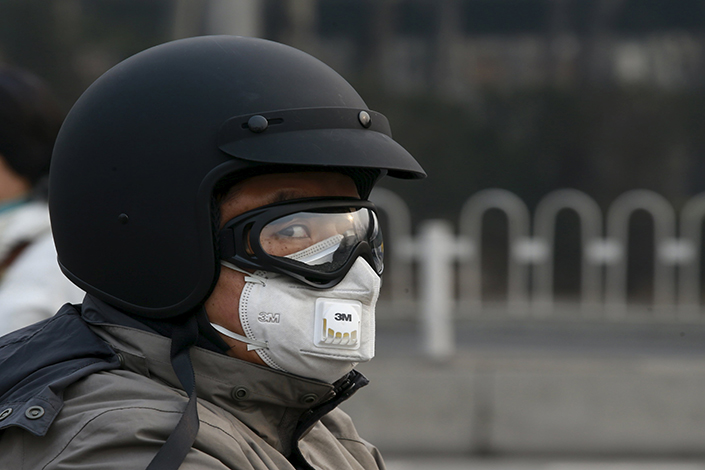 A man wearing a mask rides a motorcycle during a red alert for air pollution, in Beijing, China, on Dec. 20, 2015. Beijing declared an orange alert Monday, meaning that the Air Quality Index is forecast to be over 200 for three straight days. Photo: Visual China

(Beijing) — A blanket of heavy pollution is enveloping Beijing and its surrounding areas, with especially high levels expected for three consecutive days through Friday, prompting the environmental protection authority in Beijing to elevate the air pollution alert to orange.

Air in Beijing, Tianjin and the northern province of Hebei became moderately and heavily polluted late Monday, according to a statement released by the Ministry of Environmental Protection. The pollution is spreading further south to cities in Hebei and central Henan province.

A similar alert has been raised in other places in northern China, including Tianjin.

China’s orange designation means that the Air Quality Index is forecast to be over 200 for three straight days, of which at least one day will be above 300. The AQI measures six pollutants — including PM2.5 — which can result in respiratory and other health problems.

April is generally a month of comparatively low pollution in China because the government shuts off the heating, much of which is coal-powered, in mid-March. But manufacturing activities and a dearth of wind to blow away pollutants are combining to create an unusually toxic start to April.

Schools in the Chinese capital have been ordered to suspend outdoor activities. Meanwhile, trucks that transport building materials and construction waste won’t be allowed on roads in the city as of Wednesday. Vehicles that don’t meet high emissions-control standards also can’t travel on the capital city’s roads.

One source of the pollution is 55 cement plants in Beijing, Tianjin and Hebei, known as the Jing-Jin-Ji area, an expert group of the ministry said. The plants resumed operations on March 15 after the government closed them during the winter.

In addition, Jing-Jin-Ji saw its number of vehicles rise by 11.3% to more than 20.8 million in 2016, official statistics show. The number of diesel-powered heavy-duty cars — blamed for disproportionately high levels of pollutants — grew by 10% to 832,000 in the area last year.

The Jing-Jin-Ji area has experienced heavy pollution before, including a nine-day spell of foul air at the end of 2016 and earlier this year.

Air pollution is linked to 1.6 million deaths in China each year, according to a 2015 study by California-based Berkeley Earth.

April is usually a good month for air quality: The number of days in April when the air was poor in 2015 and last year was down to one day, according to official statistics.

But there have been exceptions. Two days of heavy air pollution were recorded in April 2013 and four days in the same month of 2014, the ministry said.

Under a four-tiered system, a blue alert is issued when the air is forecast to be heavily polluted or AQI readings exceed 200 for a 24-hour period. When the period is expected to last for 48 hours, a yellow alert is merited.

A red alert is triggered when the air quality is rated as very poor for four consecutive days, of which two days had levels above 300. A red alert is also merited when air-quality readings exceed 500, the city government said in November.

Beijing’s city environmental authority issued the previous orange alert in November and there have also been two red alerts for air pollution since then. Thirty nine heavily polluted days were recorded in the capital in 2016.