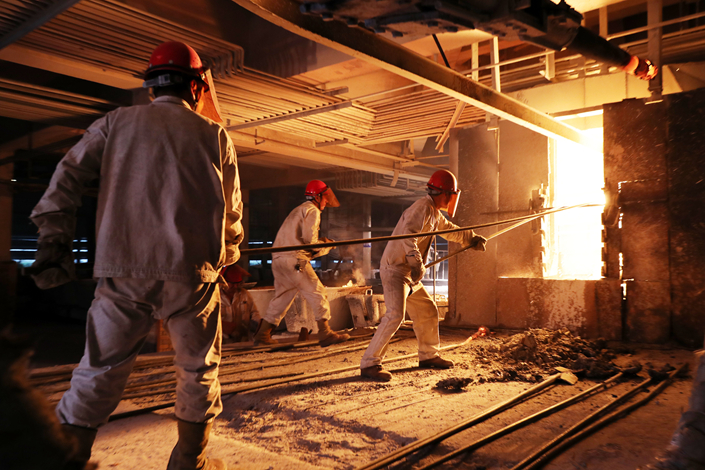 (Beijing) — “As virtue rises one foot, vice rises 10”: The Chinese Buddhist proverb is often cited as a reminder to people that the fight for righteousness can be sabotaged by powerful countervailing forces.

Take the case of Tangshan, a coastal city in Hebei province.

Tangshan, which accounts for a tenth of the country’s steel capacity, proved once again that well-intentioned government policies can end up backfiring as profit-minded company managers find ways to skirt the rules.

For roughly 60 days scattered throughout last year, Tangshan officials imposed production restrictions on steel manufacturers. The goal was to curb dire air pollution not only in that city but also in surrounding areas, including Beijing, which is just 150 km to the northwest. The policy was also imposed when Tangshan officials wanted clean air while it hosted six key international and domestic conferences and events.

But the protracted bans have been criticized for causing consequences entirely opposite from those intended. More polluting emissions were created and formerly suspended steel plants were revived, thwarting a nationwide campaign to reduce excess steel capacity.

Despite the production limits, annual steel output in Tangshan rose 6.8% in 2016 from the previous year — more than five times the growth rate in the country, government figures showed.

It all started with an industry tip.

Tangshan’s steel industry association disclosed in March — traditionally the month when work on construction starts and demand for steel peaks — that local firms would be required to halve their production for a total of 33 days during the six international and domestic meetings and events to be held in the city in the following months.

The news, which came more than 10 days ahead of the government’s official announcement, immediately sent prices surging. The price of steel billets, a semi-finished product, jumped nearly 15% to 2,020 yuan ($294) per ton over three days.

Eager to cash in on the market boom, some of Tangshan’s steelmakers flouted the government bans and went ahead with their working plans, according to the Ministry of Environment Protection, which carried out two inspection tours when north China was shrouded under heavy smog in late December and early January.

“No one was willing to (comply with the government order) to reduce production because steel prices spiked on market expectations that steel supply might turn tight,” said a senior manager with a steel plant in Tangshan, who spoke on condition of anonymity.

The city government’s restrictions mainly targeted the sintering process, which compacts iron ore powder into small nodules that can be used in a blast furnace. Sintering is a highly polluting procedure that produces hazardous wastes such as sulfur dioxide.

The assumption by officials was that steel output would be halved if 50% of the sinter machines were turned off so that fewer supplies would be available to go into blast furnaces.

But steelmakers outfoxed the regulators by increasing the creation of sinter ores ahead of the times when the limits took effect. They then used the stockpile to keep their steel factories running in “business as usual” mode when some of the sinter machines were forced to halt operations.

A byproduct of the tactic was more emissions. Instead of having sinter ores poured directly into the blast furnace when they were as hot as 500 to 600 degrees C as they came out of the sinter machine, extra coke was burned to heat the cold stockpile of sinter ores up again in the smelter.

On normal days, gas generated from burning in the smelter was used to power the sinter machines. But because the sintering plants were suspended, the heat was wasted. To make things worse, some of the blast-furnace gas was discharged without any treatment, releasing into the air large amounts of carbon monoxide, one of the six major air pollutants to be controlled under Chinese rules.

“A fatal problem of the production restriction policy was that it neglected the relationship between emissions and energy-saving,” said an official with the state-run HBIS Group Tangsteel Co., speaking on condition of anonymity. “Emissions are cut when energy is conserved. Reducing emissions without saving energy doesn’t make sense.”

He also complained that while state-owned enterprises — which the government has a tighter grip over than private firms — were forced to follow official rules to shutter some blast furnaces, many facilities at smaller steel mills that are often less efficient and lack of pollutant cleansers were left untouched.

“What was advanced got knocked out, and what was outdated was preserved,” he said.

Soaring prices also brought back to life machines and furnaces that had previously gone dormant when the market was flooded with a supply glut.

Tangshan’s steelmakers closed down around 22 million tons of capacity between 2013 and 2015 when steel prices were down and many plants were logging losses.

But some of those machines resumed operation after the rapid price gains in March and April 2016, according to sources familiar with the matter. This happened even though Beijing in 2016 started a drive to curtail 140 million tons of overcapacity in the steel industry within three to five years.

The situation in Tangshan was a microcosm of a widespread recovery of once-idled capacity across the country last year.

But most of that removal was at idle plants and actual capacity in operation saw a net increase of 36.6 million tons last year, according to Greenpeace and Custeel, which is linked to industry group China Iron and Steel Association.

This is because some previously closed plants restarted production after getting cash injections or being acquired by other companies as investors sought to grab a piece of the burgeoning market, the groups said in a report released Monday.

Many Tangshan residents are still haunted by the blanketing smog that shrouded the city on New Year’s Day.

“It was like driving through a cloud,” a taxi driver said.