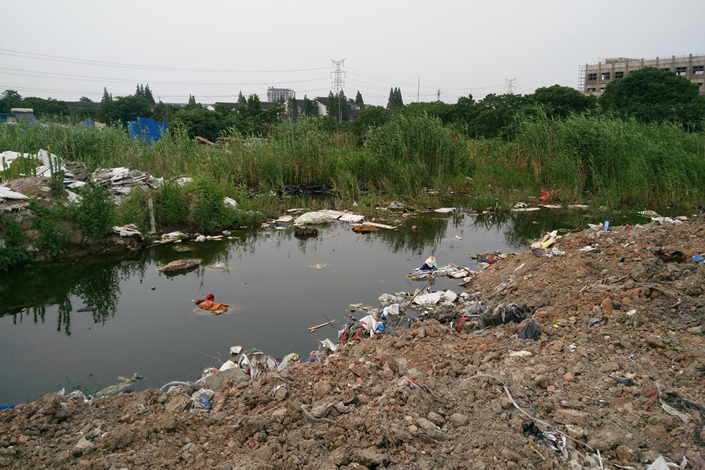 Wetlands near the canal along Lanxi Road in Luoshe town in the city of Wuxi, Jiangsu province, was seriously polluted in June 2015, when this photo was taken. Wuxi prosecutors are suing Shanghai's Yangpu District Bureau of Afforestation & City Appearance, claiming that two unlicensed private firms it hired dumped thousands of tons of garbage on the banks of Taihu Lake in mid-2015. Photo: Visual China

(Beijing) — In a rare David-vs.-Goliath move, prosecutors in a prefecture-level city are suing a Shanghai government agency for allegedly creating a stinky mess.

Government prosecutors in Wuxi, Jiangsu province, are suing the Yangpu District Bureau of Afforestation & City Appearance, which oversees sanitation work, after two unlicensed private firms hired by the agency dumped thousands of tons of garbage on the banks of Taihu Lake — one of China’s largest freshwater lakes and a major tourist destination.

An increasingly common practice among subcontractors hired by local governments is to ship tons of household garbage and even construction or industrial waste to unlicensed dumps in other cities. Wuxi is about a two-hour drive northwest of Shanghai.

The Wuxi People’s Procuratorate is demanding over 2 million yuan ($291,000) in damages from the Shanghai district, the two private firms and their subcontractors to cover the cost in cleaning up 2,920 tons of household waste allegedly dumped in 2015, court papers viewed by Caixin show.

That includes 1.46 million yuan for emergency cleanup operations and another 570,000 yuan for “near term” cleanup activities in the affected areas, according to court filings. Prosecutors did not define what they meant by “near term.”

The case comes at a time when many Chinese cities are besieged by piles of unsorted garbage. What is unique about the Wuxi case is that prosecutors are also asking the court to hold the defendants responsible for any future costs linked to long-term monitoring and cleanup work in the polluted areas.

Wuxi police officials, who are handling the case, said its investigation confirmed that four boats of household waste, or 1,670 tons, were dumped in several areas from March to May 2015.

The Shanghai district government agency paid the two private companies 48 to 78 yuan per ton of garbage disposed since 2013, even though they weren’t licensed to dispose household waste, according to court documents.

Owners of the two companies then outsourced the task for about 30 yuan per ton to several subcontractors, who transported the waste to an unlicensed landfill in a rural town in Wuxi.

Tests commissioned by the prosecutor's office show the garbage dumped in Wuxi contain toxic chemicals such as lead, cadmium and arsenic, but they did not reach hazardous levels.

It is not clear if any Shanghai officials have been punished over the incident. But in a separate trial in December, four subcontractors responsible for shipping waste to Wuxi were sentenced by a district court in Wuxi to 18 to 21 months in prison for violating environmental protection laws.

It isn’t the first time that waste from Shanghai has ended up polluting Taihu Lake. About 4,000 tons of mostly household garbage was dumped on its riverbank, along the section that runs through Wuzhong district in Suzhou, in July.

Police are still investigating that incident.