By Zhou Qijun and April Ma 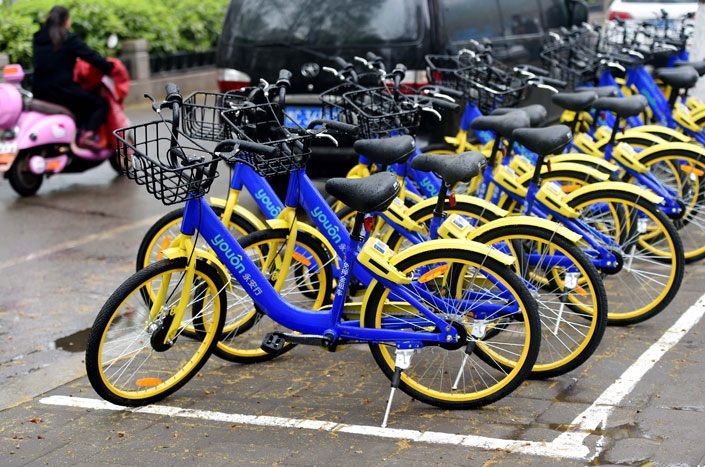 Youon Bikes has been sued for patent infringement by a Jiangsu businessman who says the company stole his bike-sharing idea. Photo: Visual China

China’s first bike-rental firm preparing to go public has squeezed the brakes on a listing plan after a patent lawsuit has cast doubt over the company’s business.

Youon Bikes is mainly a vendor and manager of city-run bike-rental systems, with return docks set up on major roads. But in the past year, it has jumped on the bike-sharing bandwagon, launching services that allow riders to pick up and leave its yellow and blue two-wheelers almost anywhere in a city.

But a Jiangsu businessman has filed a lawsuit against Youon, claiming unauthorized use of a patent he received in 2013 for “operations of a bike rental system without fixed return docks.” Gu Tailai’s case against Youon is set to go to trial in June.

Gu, who in the past has tried and failed to start a bike-sharing business with his idea, made his complaints against Youon known to China’s securities regulatory body in April.

Allowing Youon to go public despite a pending court trial would be “recklessly neglecting uncertainties plaguing the company, an irresponsible act toward investors, possibly interfering with the court decision,” Gu said in a written statement to Caixin. However, his objections were ignored by securities-issuing regulators, and Youon proceeded to complete a pricing inquiry on Wednesday, pushing it a step closer to an initial public offering (IPO). Gu went on to complain to China’s top disciplinary inspector.

Though Gu’s intellectual property is used by nearly all bike-sharing firms in China, he told Caixin that he will not proceed with lawsuits against any of the larger players in the billion-dollar sector, including Beijing Mobike Technology Co. and Ofo Inc., because he hopes “to seek opportunities for cooperation” and does not want to offend too many companies.

Before the halt on its IPO process, Youon said that the claimed patent infringement applied to less than 1% of the company’s business — the bike-sharing venture that allows bike to be parked and picked up anywhere. The lawsuit would have very little effect on the company, Youon said in a statement Thursday.

On Friday, the Youon and sponsor CICC eventually agreed to put the IPO on hold until after the dispute is settled in order to protect investor interests. CICC will then update investors on how the IPO will proceed.

But that does not mean other companies have been free from similar accusations of technology theft. Shenzhen-based digital-lock developer Lingling Kaimen claims Mobike has been infringing the IP rights of a cellphone-lock technology, and has asked the Beijing Intellectual Property Court for damages. The court has yet to make a ruling on the case.