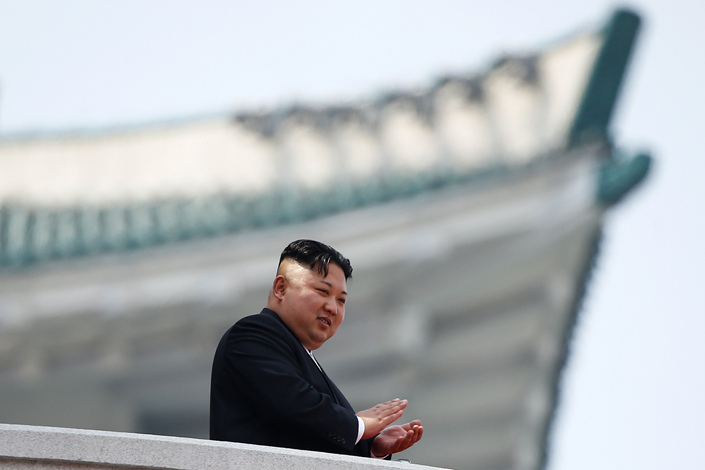 (Beijing) — China's frustrated response to North Korea's recent commentary openly attacking its traditional ally for opposing its nuclear program is rare and significant, suggesting that the relationship between the two traditional Asian allies is fraying and could even rupture, analysts said.

China has long said it supports a denuclearized Korean Peninsula, and that all parties involved in the matter, including South Korea, North Korea, the U.S. and Japan, should settle their differences through dialogue. But the situation on the peninsula has seen a recent heightening of tensions under new U.S. President Donald Trump.

China’s public sentiment has long opposed North Korea’s nuclear program, but Beijing has typically remained more restrained on the matter in its public remarks. But it has been breaking with that trend in recent weeks, as reflected by strongly-worded opinion pieces in the People’s Daily and Global Times, two media often considered to reflect Beijing’s views.

In its unusually harsh commentary last week, the North’s KCNA said the two Chinese media outlets “shifted the blame for the deteriorated relations between the DPRK and China on to the DPRK and raised lame excuses to justify China's base acts of dancing to the tune of the U.S.” DPRK is North Korea’s official name, which KCNA usually uses in its reports.

The KCNA commentary accused China of “parroting the ‘unanimous view of the international community’ cried by the U.S. and resorting to sanctions racket after branding the DPRK as a criminal, pursuant to the forces hostile toward the DPRK.”

“For the DPRK, the nuclear weapons are its absolute symbol and represent its supreme interests,” the commentary stated. “The DPRK will never beg for the maintenance of friendship with China, risking its nuclear program which is as precious as its own life, no matter how valuable the friendship is.”

Chinese Foreign Ministry spokesperson Geng Shuang on Thursday gave an official response to the KCNA commentary, insisting that China “has been assessing and dealing with the relevant issue based on its own merits in an objective and impartial manner.” He also reiterated China’s commitment to a nuclear-free peninsula.

The People’s Daily’s overseas edition rebutted the criticism more strongly by calling North Korea “stubborn” in its determination to develop nuclear weapons. “Just like a person poisoned by a bewitching drug, you can no longer talk to him with reason,” the paper wrote in its public account on the popular WeChat instant messaging platform.

“Now it has drawn a line with nuclear weapons. Whoever is opposed to its nuclear program becomes its enemy,” the People’s Daily said. “If that’s the case, North Korea has no friends, it takes the world as enemy in order to have nuclear weapons.”

“Although North Korea often publishes commentaries criticizing China’s handling of North Korean issues, it is the first time it has directly named China in recent years,” Zhang Liangui, a retired expert on North Korea at the Party School of the CPC Central Committee, told Caixin.

In the past, the North Korean official media only indirectly referred to China using terms like “neighbor country,” “big power” or “U.S. follower,” Zhang said.

He said that by openly criticizing China this time, North Korea may be moving toward an eventual break-up with China.

China helped defend North Korea during the Korean War of 1950-53, which saw the U.S. defend South Korea. Since then, the pair have been strong allies for years. But in recent years China has been keeping its distance from the North and refers to their ties as normal relations between two countries.

In addition to emphasizing denuclearization on the Korean Peninsula, China has also joined the United Nations in sanctioning North Korea for its nuclear program in recent years, including its recent decision to stop importing coal from the country. China acts as North Korea’s most important economic lifeline, serving as a window for the majority of its foreign trade.

He Fan, a professor of economics at the HSBC Business School of Peking University, said the KCNA commentary shows China-North Korea relations are at a new low.

“China’s response with North Korea’s provocations is natural,” He said. “Apparently, both sides are considering a change of their previous approaches,” he added, pointing out the two sides lack trust and have no clear communication channels.

Zhang said the key hurdle in China-North Korean ties lies in the nuclear issue, with both sides unlikely to change their stance on the matter.