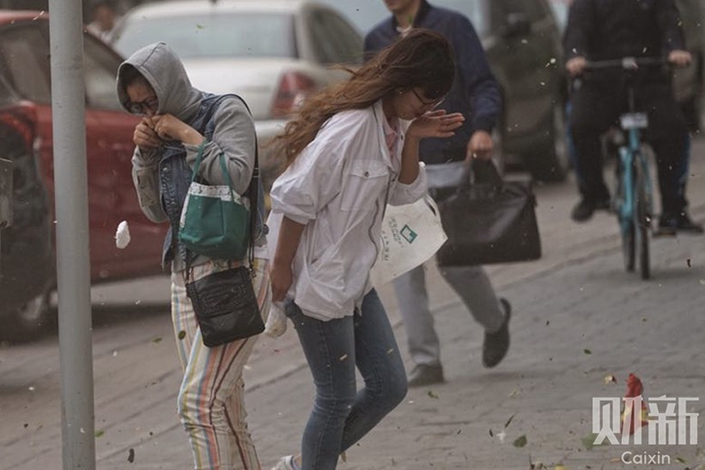 Office workers hide their faces while walking in the wind and dust near the Tuanjiehu subway station in Beijing's Chaoyang district on Thursday. Photo: Liang Yingfei/Caixin

(Beijing) — The sandstorm that left Beijing with yellow skies and “beyond index” pollution levels for nearly two days is now moving southward across the Yangtze River and is forecast to hit Shanghai on Friday evening.

Beijing lifted its sandstorm alert at around 11:30 a.m. on Friday, and by 2 p.m., the level of PM10, a major pollutant, had dropped to 202 micrograms per cubic meter of air from 2,000 micrograms a day earlier. The capital’s Air Quality Index indicated moderate pollution with a reading of 126 on Friday afternoon.

The dusty spell had covered nearly 17% of the country by Thursday afternoon, according to the Ministry of Environmental Protection. There were no official announcements of deaths. Chinese media reported a few injuries in the capital on Friday.

Large amounts of dust blowing in on strong winds from the Inner Mongolia and Xinjiang regions continued to exacerbate air pollution in many Chinese cities on Friday, the ministry said.

Xi’an, in the northwestern province of Shaanxi, was among the worst cities affected by 2 p.m. Friday, with a PM10 reading of 1,402 micrograms per cubic meter of air, according to China Meteorological Bureau (CMB).

But as the sandstorm moves southeast, its intensity was waning, and the Shanghai Meteorological Bureau issued a forecast early Friday saying that the city will be “affected by floating dust.” This is the lowest level in China’s five-tier sandstorm classification system, which uses the amount of visibility as its benchmark.

The current dust storm was originally classified as a “strong sandstorm” because it reduced visibility in some areas in central and western Inner Mongolia to less than 500 meters, according to the CMB. But under conditions of “floating dust,” visibility levels remain almost unaffected within a 10-km range.

This is the seventh dust storm to sweep across northern China this year, but it was the most severe so far, the CMB said. The storm has raised concerns about how vulnerable China was to such natural disasters.

According to scientists, factors that contribute to the creation of sandstorms are strong winds, dry spells and desertification — deforestation that leaves the soil exposed.

The Hexi Corridor — a long, narrow plain in Gansu province that served as a major passageway in the ancient Silk Road — and the Alxa Plateau in Inner Mongolia are key areas where sandstorms have originated, the CMB said, citing statistics collected from 1952 to 2000.

In the past two decades, fewer sandstorms have hit northern China, and they have also become less intense due to government-led efforts to fight desertification and reduce dust pollution.

The number of days with dust pollution in the capital has declined gradually over the past half-century. The number fell from 26 days per year on average in the 1950s to 10 to 20 days per year in the 1960s and remained there until the 1980s. Then it fell to less than five days per year in the 1990s, data from the Beijing Meteorological Bureau showed. It again went up to seven days per year between 2001 and 2010, but afforestation efforts meant Beijing was choked in dust for only three days each year since 2011.