JD.com Lays Good Foundation for Growth, but Stock Could Be Pricey 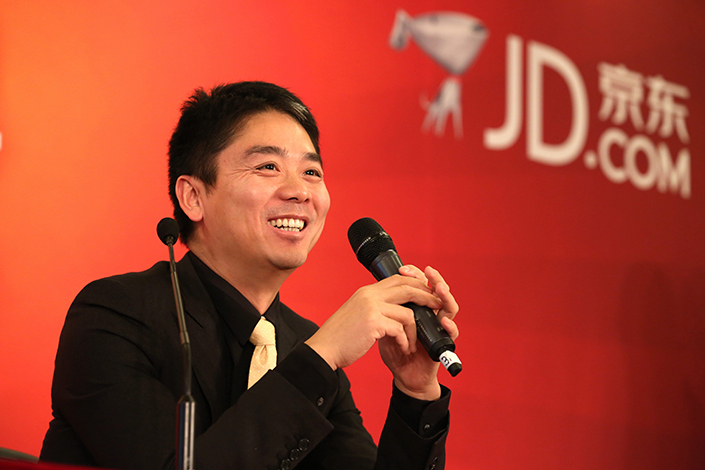 E-commerce giant JD.com this week reported its first quarterly profit since its IPO in 2014. Above, JD.com CEO Richard Liu listens to a question during an interview in Beijing on Dec. 23, 2013. Photo: Visual China

(Beijing) — JD.com Inc. has laid a foundation for good long-term growth, though its stock could be due for a pullback after reaching an all-time high, analysts said on Tuesday, after China’s No. 2 e-commerce company posted its first-ever profit.

JD.com has long lived in the shadow of older and larger rival Alibaba Group Holding Ltd., which is highly profitable and commands more than half of China’s e-commerce market where businesses sell products directly to consumers (B2C). By comparison, JD.com is a solid second with about a quarter of China’s B2C market, but until this week had never reported a quarterly net profit since its initial public offering (IPO) in 2014.

That changed on Monday, when the company posted a net profit of 355.7 million yuan ($51.5 million) for the three months through March, compared with a loss of 867.3 million yuan a year earlier.

The surprise profit sparked an 8% rally for JD.com’s American Depositary Shares, sending them to an all-time high of $38.55 in Monday trading. Following that jump, the stock is nearly double its levels from July, fueled by bullishness over the potential of China’s huge e-commerce market. Analysts said the rally is a reward for investors who waited patiently for years while JD.com plowed money into new investments and aggressive marketing to compete with the larger Alibaba.

“The company has positioned itself as a Chinese Amazon, and has invested heavily in warehousing, logistics and delivery,” said Brock Silvers, managing director of investment advisory Kaiyuan Capital. “Those domestic investments are now beginning to pay dividends via improved margins.”

“The strong results across the board reflect that the Chinese market is embracing our model of a high-quality online shopping experience,” he said in a statement accompanying the results. “Looking forward, we are focused on further enhancing our customer experience, while leveraging the capabilities of our platform to serve the needs of a broader business ecosystem.”

Both JD.com and Alibaba have been spending heavily on logistics to improve their efficiency and customer experience, though in different ways due to their highly different business models. JD.com operates a business model similar to Amazon.com and most other traditional e-commerce firms, stocking its own online store and selling products directly to consumers. By comparison, Alibaba operates online shopping malls, most notably its B2C-style Tmall, where consumers can shop among hundreds of third-party merchants, many of them big-name retailers.

Its more-concentrated model has made it easier for JD.com to make big-picture infrastructure investments since it controls all of its goods directly from the time it buys them to when they ship to consumers. The company currently owns a national chain of warehouses and is moving that network down into underserved smaller cities, where many see big potential. It is also experimenting heavily with delivery drones, and in April announced a plan to build a network of 150 takeoff and landing sites to serve hard-to-reach and thinly populated areas in mountainous Sichuan province.

“For core e-commerce, I’d have to say JD’s strategic move to own logistics is a very interesting approach, one which I think will open up opportunities beyond e-commerce, which Alibaba didn’t really do,” said Ryan Roberts, an analyst at research house MCM Partners. “Their ultimate goal (may be) to move from a ‘platform only’ approach to acting as a partner of choice for China retail, both on and offline. Owning a lean and mean logistics infrastructure may be the missing piece for brick-and-mortar retail to compete with online outlets.”

JD.com’s surprise move into the profit column wasn’t the first such development for the company’s dynamic bottom line. JD.com has previously announced profits based on its own accounting standards, which differ from generally accepted accounting principles (GAAP). It also said it was profitable on a GAAP basis for at least one quarter before its 2014 IPO. Analysts said the uneven performance is likely to continue, and added that the stock may be due for a pullback after its recent run-up.

“Management made it relatively clear that although it hit profitability in the first quarter, that might not be a recurring theme,” Roberts said. “They’re investing in a ton of new areas beyond e-commerce, which could drag on the bottom line. … I don’t think they will maintain profitability in the coming quarters, but will bounce between positive and negative earnings.”

Research house Jeffries also noted that “Management highlighted that first quarter results may not be used as benchmark for the whole year performance,” adding that capital spending, including an ongoing expansion into Indonesia, could eat into JD.com’s bottom line. Jeffries maintained its “buy” rating on the company, with a price target of $40 for the stock.

But Silvers said the shares probably don’t have much upside for now, and might be set for an adjustment after their recent run-up that includes a 50% rise since the start of this year.

“I personally think JD is fully priced for now, having been on an extended upswing,” he said. “While the company itself is doing great, the stock is no bargain. In the event of a recession, I think the online sector will feel less pain than will many others, and I’d look to pick up some cheaper JD shares as a longer-term investment.”