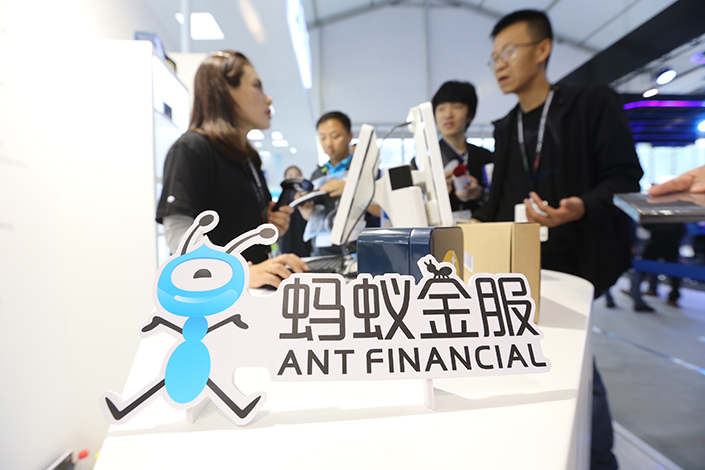 (Beijing) — A major state-run wireless carrier and a private shared-economy company have announced new tie-ups with Ant Financial’s personal credit scoring unit, spotlighting a growing race to see who can be first to cash in on an emerging financial services business with huge potential.

One of Sesame Credit’s new tie-ups unveiled this week comes with China Unicom, a state-run giant and China’s second-largest mobile carrier. The other is with the privately funded Aihuishou.com, a recycled-electronics specialist that is trying to cash in on the new shared economy.

The Unicom deal will waive deposit requirements for a wide range of services for subscribers who score above 650 on Sesame’s system. The carrier will also share its own data with Sesame under the deal to help improve its scoring system. The Aihuishou deal will be similar, waiving deposit requirements for users of the company’s cellphone-rental service whose respective scores are 600 or higher.

“Through this agreement, Aihuishou and Sesame hope to join forces to set a new industry standard, to create a win-win where the two sides complement each other,” Aihuishou said in its announcement. “The tie-up will improve the phone rental process by lowering the threshold for people to use the service and make more differentiated products accessible to people based on their credit.”

China is trying to create credit rating systems for both individuals and enterprises as it moves from its socialist roots to a market economy driven by competition and consumer cultures. Such systems play a critical role in such economies, allowing banks, companies and individuals to determine the creditworthiness of their customers and other people with whom they do business.

In China, the process of establishing such an industry is generally being led by the central bank, with local governments, state-owned entities and private companies like Ant Financial Services Group, also parent of the Alipay electronic payments service, all vying for a piece of what is expected to become a huge market for such services.

“The rising of digitalization and sharing economy are calling for measurements of individual credibility, which is driving the emergence of personal credit rating platforms,” said Edward Tse, CEO of strategic consultant Gao Peng Advisory. “Ant Financial, parent of Sesame Credit and Alipay, plans to go public in the near future and needs exposure to the public.”

Ant Financial, the former financial unit of e-commerce giant Alibaba Group Holding Ltd., has been among the most aggressive among private sector companies entering the space. Sesame relies heavily on transaction data garnered through Ant’s own Alipay electronics payment service, as well as other big transactional data provided by Alibaba and others to create its scores.

The two deals are the latest in a series for Sesame, and come less than two months after the company announced a series of similar tie-ups that will waive deposit requirements for high-credit-scoring users of several of China’s new generation of shared-bike companies, including leader Ofo Inc.

Despite the industry’s recent advances, progress in the quality of service has still been relatively slow due to the complexity of the process. Last month, the central bank disclosed that none of the eight companies picked for a pilot program to develop personal credit rating services two years ago has obtained a formal license.

Sesame was one of the participants, along with Tencent Credit Services, a company backed by internet giant Tencent Holdings Ltd.

Wan Cunzhi, the top central bank official overseeing the program, said all of the eight were “below market demand and regulatory standards,” and that the group had “fallen short of our expectations.”

The market is still emerging, and it’s far from clear yet if Sesame and the others have the necessary resources to create effective rating systems, said Brock Silvers, managing director of investment advisory Kaiyuan Capital.

“If there is profit to be earned renting bicycles by the minute, which remains in question, then there’s also room for a company like Sesame,” he said, referring to the bike-sharing industry. “There are also real concerns with privacy and governmental interference in social and economic relationships. But Sesame’s technology is interesting, and seems to fit the needs of China's rapidly increasing online reliance upon social technology. If Sesame continues to accrue large accounts, it just may end up winning.”