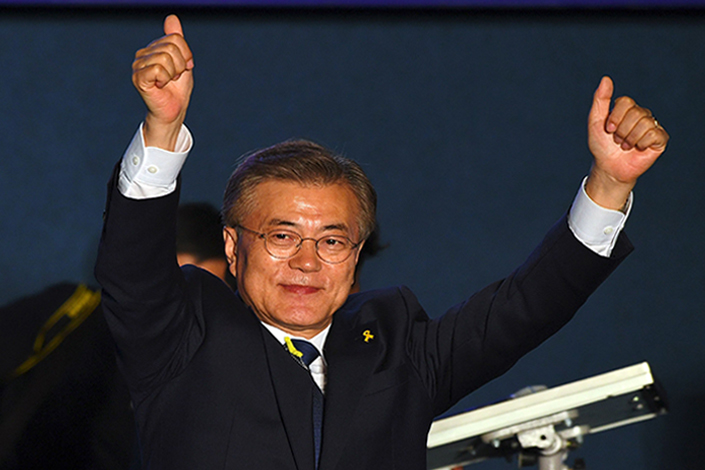 Newly elected South Korean President Moon Jae-in has promised to work with China and the U.S. to ease diplomatic tensions over his country's deployment of a U.S. anti-missile defense system. Photo: Visual China

South Korea will negotiate with China and the U.S. to ease the tension caused by the deployment of the THAAD missile-defense system, newly elected President Moon Jae-in vowed on Wednesday.

Winning the election with 41% of the votes on Tuesday, Moon was inaugurated as South Korea’s 19th president, after his predecessor, Park Geun-hye, was brought down over corruption charges.

During his campaign, Moon advocated engaging with North Korea while criticizing his own country’s government for being too hasty to deploy the Terminal High Altitude Area Defense system. The system became operational in April.

On his inaugural speech Wednesday, Moon also said he is ready to visit Washington, Beijing and Tokyo immediately. And “under the right circumstances, go to Pyongyang as well,” he said, referring to the North Korean capital, according to a report by South Korea’s Yonhap News Agency.

China has been adamantly opposed to the U.S. deployment of the missile system in South Korea, which it believes threatens its strategic security. China-South Korea ties have hit a low point, and South Korean companies have found the business environment increasingly difficult in China.

“Foreign relations are now Moon’s top priority, as it not only concerns political matters, but also economic relations, as South Korea is an export-oriented country,” said Lee Kook-bong, deputy director of the Center of South Korean Studies at Shanghai Jiaotong University.

He said that if Moon doesn’t address the security issues on the Korean Peninsula, his administration will not be stable.

Zheng Jiyong, director of the Center for Korean Studies at Fudan University, said there is also the possibility that South Korea could put a little distance between itself and the U.S. by paying for the THAAD system and then operating the system itself — a scenario that might ease tensions with China.

“If Moon can do that, he may satisfy the U.S. while reducing China’s strategic security concerns,” Zheng told Caixin.

He said that under the Moon administration, the military cooperation between South Korea, Japan and the U.S. may slow down, as the military bond of the three countries will only hurt South Korea diplomatically.

Chinese President Xi Jinping sent his congratulations to Moon on Wednesday morning, stressing that China “is willing to work with South Korea to jointly safeguard the hard-earned achievements in bilateral relations.”