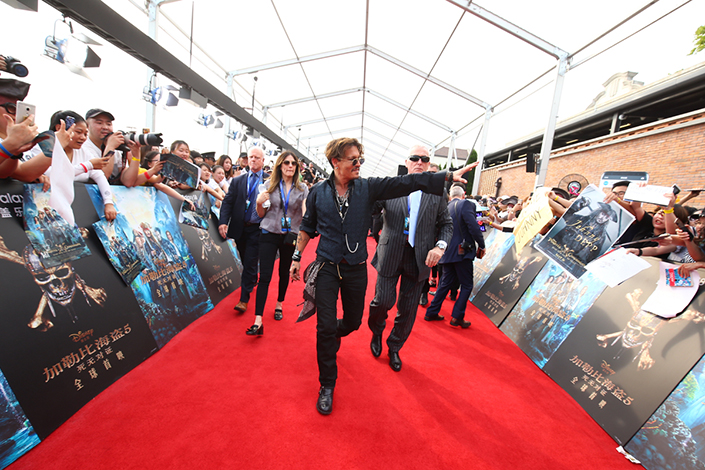 Actor Johnny Depp and other actors attend the China premiere of "Pirates of the Caribbean: Dead Men Tell No Tales" in Shanghai on Thursday. Photo: The Walt Disney Co. China

(Beijing) — The latest film in Disney’s hugely popular Pirates of the Caribbean franchise has washed ashore in Shanghai, along with its star-studded cast, marking the first global premiere in China for one of the U.S. entertainment giant’s blockbuster titles.

Franchise star Johnny Depp led the cast of Pirates of the Caribbean: Dead Men Tell No Tales in a walk down the red carpet on Thursday for the film’s premiere at the year-old Shanghai Disney Resort. The film is the fifth in the franchise, with a cast that includes Orlando Bloom, Geoffrey Rush and Javier Bardem.

The Walt Disney Co.’s choice of venue reflects the rapid rise of China’s box office, while Shanghai was the center of the country’s earliest film industry and is home to the company’s newest Disneyland, which opened in June. That park includes an entire area, Treasure Cove, dedicated to the Pirates of the Caribbean theme.

“The growth and importance of the Chinese box office combined with the extremely positive reaction audiences have had to our films made China an exciting location for our global premiere and Shanghai Disney Resort’s Treasure Cove, the first Pirates-themed land in a Disney park anywhere in the world, provided the most incredible backdrop for this movie premiere,” said John Hsu, Disney’s studio manager.

“Pirates of the Caribbean 5 made its global premiere yesterday with a red-carpet event in Shanghai,” the portal wrote on its account on Weibo, China’s equivalent of Twitter. “Star Johnny Depp was doing his best to sign autographs for adoring fans. He was so excited, his bodyguards couldn’t pull him away.”

Fans who couldn’t make it to the event were buzzing on the internet, mostly commenting on Depp’s cute looks, posting throbbing hearts but also noting his signs of age.

“I’m so envious of fans who were there. Uncle Johnny will always be Captain Jack,” said a Weibo user named Shen Suye, referring to the name of Depp’s character in the franchise.

“Fans at the event were so lucky,” said another user, HallelujahLin.

But at least one fan, fantasy_ycc, was crying foul over the choice of Shanghai for the premiere. “Why wasn’t it premiered in Beijing? Is it because there’s no Disney (Resort) in Beijing?” she said.

The Pirates franchise has gained popularity in China since the release of the original film in 2003. The previous film and fourth in the series, Pirates of the Caribbean: On Stranger Tides, raked in 464 million yuan ($67.2 million) at the Chinese box office with its release in 2011, making it the country’s 121st-best-grossing movie of all time.

China is home to the world’s second-largest box office, which generated 45.7 billion yuan last year, or nearly 60% the size of the North American box office, according to industry data. About half of the country’s ticket revenues come from Hollywood-produced films, and Disney’s most successful film in the market to date was its 2016 release Zootopia, which took in 1.53 billion yuan.

Disney has also bet heavily on China’s market for live entertainment, with the opening of its $5.5 billion Shanghai Disney Resort last year, its sixth Disneyland theme park worldwide. CEO Bob Iger said the park is expected to welcome its 10 millionth visitor by its first anniversary on June 16.