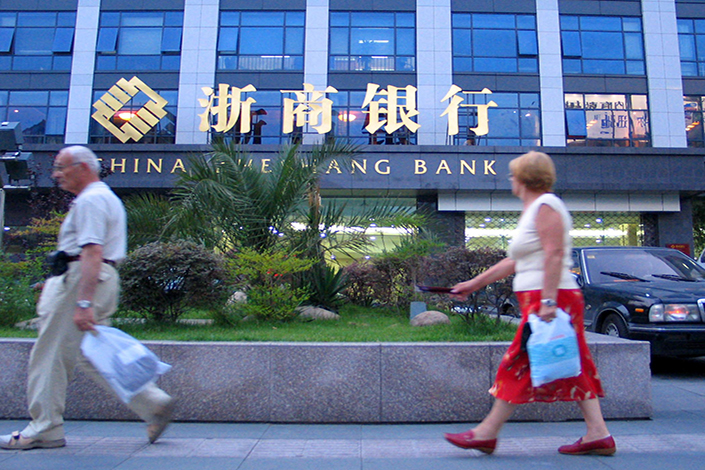 The head office of Hangzhou Zheshang Bank in Hangzhou, Zhejiang province on, China, on June 2, 2005. The lender is the latest to offer asset-backed securities to investors as authorities encourage market development. Photo: Visual China

(Beijing)–China Zheshang Bank has become the latest lender to wade into the asset-backed securities (ABS) market as regulators encourage banks to offload their soured loans and help companies manage their own debts by packaging and selling them to other investors.

The joint-stock bank, based in the eastern city of Hangzhou, said it has won approval from the Shenzhen Stock Exchange to issue a 40 billion yuan ABS whose underlying assets will include corporate accounts receivables and bond receivables. These securities, known as enterprise ABS in Chinese, are different from so-called credit ABS, where the underlying assets are bank loans or financial leases.

China’s asset-backed securities market is still small but has grown rapidly since regulators lifted a suspension in 2012 that had been imposed since the global financial crisis. Issuance has been especially strong since late 2014, when the securities and banking watchdogs relaxed policies to stimulate the market.

The amount of ABS outstanding at the end of last year stood at almost 1.2 trillion yuan, up by 52.7% from the end of 2015, according to data from China Central Depository & Clearing Co. (CCDC), which provides settlement and clearing services for the interbank bond market.

Most ABS have so far been issued on the interbank market, where most fixed-income securities are traded, rather than on the country’s two stock exchanges.

Banks have been among the biggest issuers of ABS, as they use the vehicles to get illiquid loan assets off their balance sheets. The selection, packaging and sale of the securities also generate revenue for lenders who are looking to diversify their sources of income. Banks act as intermediaries in packaging the assets into an ABS and selling them to investors.

Institutions ranging from the biggest state-owned lenders to smaller rural banks have issued ABS over the past year, and six banks announced plans to sell securities backed by non-performing corporate loans.

In 2016, 842 billion yuan worth of asset-backed securities were sold, a 37.3% increase from the previous year, with enterprise ABS overtaking credit ABS for the first time as issuance of the former surged by 115% to 438.5 billion yuan, according to CCDC data. Sales of securities backed by bank loans and financial leasing contracts fell by 4.6%.

Analysts said it is getting more difficult for banks to issue credit ABS because good-quality loans are increasingly hard to come by.