By Ma Yanyan and Li Rongde 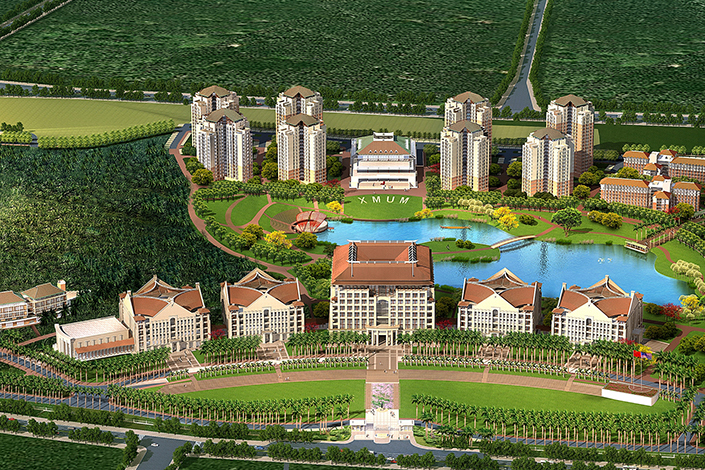 (Beijing) – Construction at the first-ever overseas campus built by a Chinese university, Xiamen University Malaysia, is nearing its halfway mark.

The school says it has tapped into opportunities created under the Belt and Road Initiative, and had enrolled nearly 2,000 students by the end of April.

Malaysia is a bustling hub for higher education in Southeast Asia. The new campus, which will cover an area of 150 aces once completed, is in the state of Selangor, some 45 kilometers from the Malaysian capital, Kuala Lumpur.

Chinese universities have been vying to go overseas as demand for China-specific academic courses and research has been on the rise. One of the country’s elite colleges, Peking University, acquired a medieval campus in the city of Oxford for 8.8 million pounds ($11 million) in February and is turning it into a business school.

Xiamen University’s Malaysia campus is expected to cost 1.3 billion Ringgits ($290 million) or about 2 billion yuan to build. It is being funded through loans from Chinese lenders obtained with the support of the government, as well as donations, said Wang Ruifang, head of Xiamen University Malaysia.

The college had earlier planned to introduce some of its popular courses such as chemical engineering and oceanic engineering, said Zhang Yi, who oversees school affairs at the campus. But most local students preferred programs in finance, commerce, business administration and accounting, she said.

The campus had more than 1,900 students including 1,464 from Malaysia and 44o from China. The figure was nearly six times the number of enrollments when the campus was partially opened to students in February of 2016.

Local students pay between 13,000 and 24,000 ringgits in tuition per school year at Xiamen University’s branch campus. This was comparable to fees at state-funded colleges in Malaysia.

Local students are also offered a one-off discount of up to 3,000 ringgits and some outstanding students could receive full scholarships, Wang said.

Ivan Yap who is majoring in international commerce said he chose Xiamen University Malaysia because he was thinking of a future career in China.

"I liked the campus when I first visited last year and its teaching staff is also good," he said.

Only 11 international students from countries other than China were currently enrolled, she said.

"But we hope that international students account for nearly a fifth of our new recruits as demand for talent with knowledge of China and countries participating in the Belt and Road Initiative increases," she said.

The Belt and Road Initiative is Chinese President Xi Jinping’s signature diplomatic push aimed at reviving China’s influence along ancient trading routes and exporting excess production capacity. The initiative includes an overland Silk Road Economic Belt that connects China with Europe through Central Asia, and an ocean-based 21st Century Maritime Silk Road that links countries to the south of China and leads all the way to Africa and southern Europe.

The agreement to build Xiamen University’s overseas campus was signed during a visit to Malaysia by Chinese president Xi Jinping in October 2013, when Xi first launched the idea.

Malaysian Prime Minister Najib Razak is among 29 heads of state to attend the two-day Belt and Road Forum in Beijing that wrapped up on May 15. The Chinese president pledged nearly 100 billion yuan in infrastructure projects during the summit.