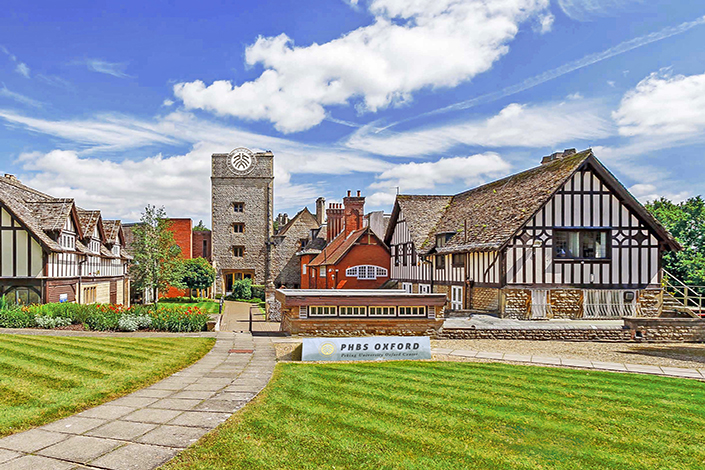 (Shenzhen) — One of China’s top universities has acquired a medieval campus in the city of Oxford, a hub of higher learning in England for centuries, and is turning it into a business school.

Peking University HSBC Business School, based in the southern city of Shenzhen, said it signed an agreement in late February with the Open University in Britain to purchase one of its campuses for 8.8 million pounds ($11 million).

Hai Wen, the head of the school, said the medieval buildings at the site — the size of nine soccer fields — will become the first overseas campus of a Chinese business school.

The new school, PHBS Oxford, will open its doors to students from the U.K., Europe and China in summer 2018. Students will have the opportunity to study for a year at the Oxford campus before coming to China for another year, where they will be taught courses closely linked to the Chinese economy and have the chance to meet Chinese entrepreneurs, Hai said.

However, he did not say how many students the school initially plans to enroll and how much it will charge for the two-year master’s program.

An increasing number of European students have shown interest in China as multilateral trade continues to grow, according to Liu Shaojia, a former professor of economics at Brunel University London, who helped Hai clinch the deal.

However, students are having difficulty in understanding many China-specific issues such as the widespread problem of ticket scalping in China,” he said. “The best way to understand this phenomenon is for students to come to study in China and interact with scalpers themselves.”

Peking University’s overseas push comes at a time when the Ministry of Education is mulling the details of an ambitious plan to improve the global rankings of several Chinese universities in terms of teaching quality and research output and transform a number of Chinese labs into world-class R&D centers.

The top leadership under President Xi Jinping pledged to allocate 2.5 percent of gross domestic product (GDP) for research and development by 2020 as it aims to foster innovation to rev up growth in China’s slowing economy, according to a blueprint document released by the government in May 2016.

Peking University, which is 39th in the 2016 QS World University Rankings, has been given billions of yuan by the government to improve its research facilities and recruit teaching staff from top universities abroad to boost its international profile.

Over 90% of the teaching staff at Peking University HSBC Business School have a doctoral degree from a renowned overseas university, Hai said. Over 40% of its faculty are foreign professors, and about 15% of its students are overseas students, and the medium of instruction is English, he said.

In 2015, the Open University in Britain announced that it would close seven regional centers, according to British media reports.

Peking University was among four contenders, which included a college under Oxford University, to be shortlisted for the second round of bidding for the facility in Boars Hill in November, Hai said.

To boost its chance of winning, management at Peking University agreed "to offer a very tempting price leaving Britain's Open University with little room to say 'no'" even though Chinese universities have no track record in overseas acquisitions, he said.

The Shenzhen government required a stamp of the board of directors like that of a company in order to approve cross-border money transfer needed for the acquisition, as a result of capital controls by the central government to stem excessive yuan outflows. But the university is not a company and has no such board. The Communist Party committee at Peking University, the leading body that is present at state-sponsored universities in China, negotiated with the Shenzhen government and eventually reached an agreement to use the party committee as a de facto board for the paperwork.

Hai said he appreciate Shenzhen authorities’ flexibility in the approval.

The Shenzhen government, which teamed up with Peking University to set up the business school in the city in 2004, also backed up the deal by fast-tracking administrative approvals needed for the money transfer, Hai said.

This article has been updated to properly present Hai Wen’s surname, and to clarify Peking University management’s role in securing the deal.