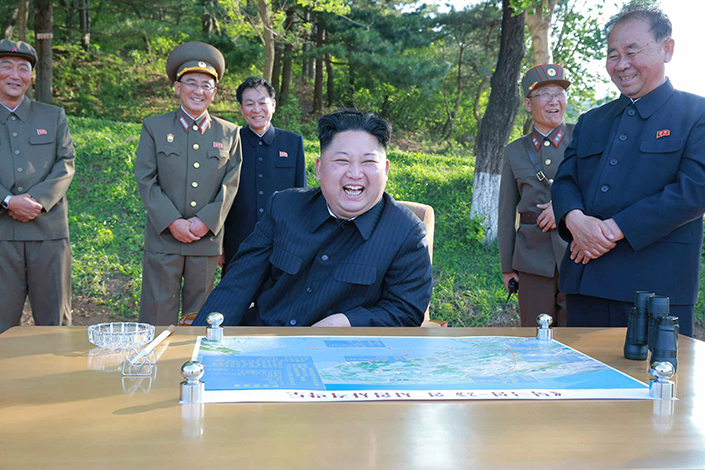 North Korean leader Kim Jong-un smiles in this photo the country says was taken after the latest missile test.

In response to a reporters’ inquiry on her comment to the U.N. meeting, Hua said the international community should uphold three points of consensus, which are to seek a nuclear-free Korean Peninsula, to fully follow U.N. Security Council’s resolutions, and to solve the nuclear issue through peaceful means.

The Security Council is expected to meet on Tuesday to discuss the latest missile launch at the request of the U.S., Japan and South Korea, Reuters cited diplomats as saying.

Sunday’s missile, which was confirmed by the North’s state-run KCNA news agency, flew about 500 kilometers toward the Sea of Japan, South Korea’s Joint Chiefs of Staff said on Sunday.

The U.N. Security Council on May 15 condemned North Korea’s missile launches on April 29 and May 14, saying they threatened regional security.

The latest missile launch was seen as a defying and hard-line attitude of North Korea to South Korea’s new president, who pledged to seek engagement instead of confrontation with the North. Moon, who was sworn in on May 10, has attempted a “pre-emptive” diplomatic strategy by sending personal envoys to several big powers, including the U.S., China, Japan and the EU, with his envoy heading to Russia this week.

U.S. President Donald Trump has recently softened its previously fiery stance toward North Korea, signaling a significant shift of his administration’s rhetoric since last month. On Thursday, Trump told South Korea’s presidential envoy Hong Seok-hyun that Washington was willing to try to resolve the North Korean nuclear crisis through engagement, but under the right conditions.

Lee Seong-hyon, a research fellow at The Sejong Institue, said it is still too early to tell whether Moon and Trump could cooperate. “In terms of engaging with the North, the so-called ‘under right conditions’ are still not yet a consensus between the U.S. and South Korea. To reach such a consensus will require further negotiations between the two countries,” he told Caixin.

Lee said that a successful cooperation between Moon and Trump would also hinge on the domestic political situation. Moon still faces pressure from South Korea’s conservative camp, which hopes to regain ground in next year’s national assembly middle election, after a humiliating loss in the general election two weeks ago. “For the conservatives, North Korea is considered an evil country,” Lee said. “The best way to deal with it is by sanctions and to make it isolated,” As a result, “it remains to be seen how Moon can communicate successfully with them.”

Lee said the third reason for that uncertainty related to the communication between the U.S. and China, which have faced friction over the thorny issue of the Terminal High Altitude Area Defense (THAAD). “Of the trilateral communications or cooperation among the U.S., China and South Korea, there is the THAAD issue.” Lee said. “This will reduce the three countries’ momentum to cooperate to deal with North Korea.”