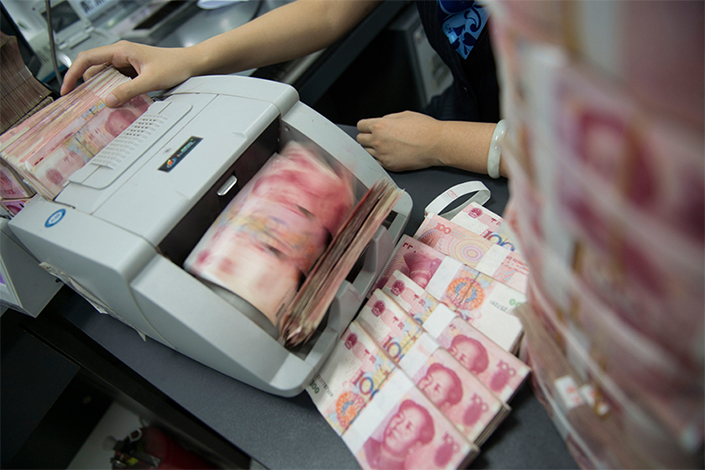 A clerk counts RMB banknotes with a counting machine in a bank. Photo: IC

(Beijing) – The gap between the cost of getting funds from the interbank market and the interest on loans banks make to their customers has been narrowing in China, squeezing the lenders and sparking concerns that it may become more difficult for companies to get loans.

The cost of borrowing through negotiable certificates of deposit – a common interbank lending tool – has continued to increase, with the interest rate on one-year agreements reaching 5% to 5.15% recently and sometimes even higher, according to several people working at different banks.

The rates are higher than the benchmark set by the central bank for one-year loans, which was fixed at 4.35% in October 2015, meaning that banks would lose money if they lend the deposits out at the benchmark level.

Some banks have responded to rising capital costs by requiring companies to pay more for loans, but the adjustments in general were too small to offset the change in interbank lending interest rates, according to several bank employees.

The president of a city commercial bank, for example, said they had slightly increased the interest rate on loans to companies, but the change was so small that it had only “a symbolic impact” on the borrowers.

Interbank loans are also becoming more expensive, judging by the Shanghai Interbank Offered Rate, or Shibor, which is calculated based on the interest rates 18 banks offer to lend unsecured funds to another bank.

The one-year variety of Shibor increased by 1.13 basis points to 4.3137% on May 23, exceeding the 4.3% loan prime rate (LPR), which reflects the lending interest rate nine select bank ask on loans to their best corporate borrowers. Both Shibor and LPR are calculated and published every business day by the National Interbank Funding Center.

It is very unusual for interbank lending rates to be higher than the interest rate on loans made to companies, experts said.

If this situation persists, banks may grow reluctant to lend, to the detriment of the economy, said one manager from a bank. “The central bank has not said anything about raising (the benchmark) loan interest rates, so companies think banks shouldn’t change theirs.”

“That way we can only limit the loans we make, because we’d be losing money if we lend too much,” he said.