By Yang Yanwen and Song Shiqing 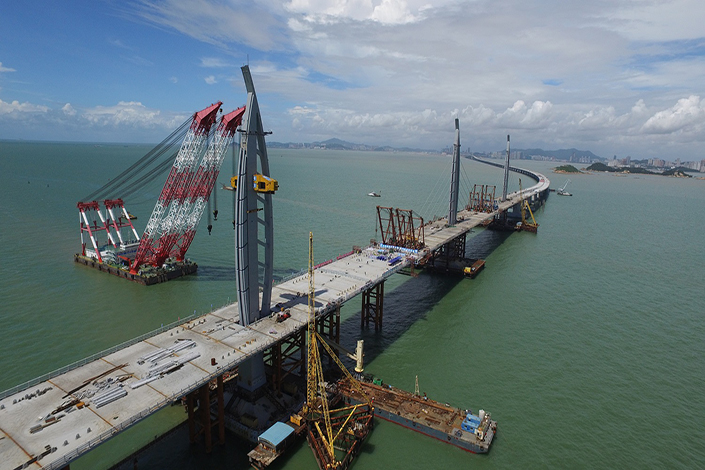 The Hong Kong–Zhuhai–Macau Bridge, an ongoing construction project, consists of a series of bridges and tunnels crossing the Lingdingyang channel that will connect Hong Kong, Macau and Zhuhai, three major cities on the Pearl River Delta in China, with a final tunnel having been installed on May 2, 2017. Photo: Visual China

In response to the incident, a government spokesman said on Wednesday Hong Kong was conducting an in-depth examination of the safety of the Hong Kong section of the bridge, and would hold a press conference to release more details on Thursday.

The firm started to provide construction materials testing services to the bridge with 51 laboratory-based staff, after signing an $11 million contract with the Civil Engineering and Development Department in 2012, according to a post on the company’s website.

Since the ICAC investigation is currently under way, the government said it was so far unable to examine the relevant portion of the bridge involved in the case. But it said it had conducted examinations on the strength of concrete in three main related projects, including the Hong Kong Boundary Crossing Facilities, Hong Kong Link Road and the tunnel from Chek Lap Kok to Tuen Men.

Initial test results showed that the structures were all up to standards, the government said, but inspections are still ongoing.

The government will also hire an independent organization to give a professional assessment of the condition of the bridge and assist in conducting non-destructive tests on the strength of the concrete used in the three projects over the coming two weeks, the spokesman added.

In mid-2016, a staff member from the civil engineering department responsible for overseeing concrete laboratory tests observed anomalies during checks on test reports. The department then referred the case to the anti-graft watchdog, which launched the investigation, codenamed “Greenfield,” last Tuesday.

The civil engineering department hired Jacobs Engineering to conduct compression tests on samples of concrete. The test for each sample was required to be conducted within a set time frame and all cube-formed samples were required to pass the test.

The department said it found that laboratory technicians and assistants may have adjusted the timing mechanisms on the testing machines to cover up irregularities when some tests were not conducted within a given timeframe.

The civil engineering department also accused some members of the laboratory staff of replacing concrete samples with metal calibration cylinder and high strength concrete cubes to falsify the test results. The alleged malpractice could have started as early as 2015.

Since construction began in 2011, the Hong Kong section of the bridge project has been plagued by delays and cost overruns. The cost has been pushed up to $17 billion from $10.6 billion, and the completion date was postponed to the end of 2017 from 2016.

Ten workers have died and more than 600 have been injured in a total of 275 incidents during the construction of the bridge, according to local newspaper South China Morning Post.