By Dong Tongjian and Fran Wang 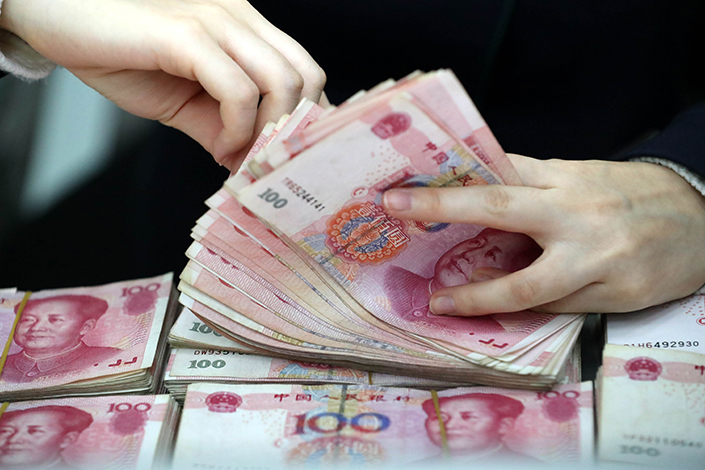 (Beijing) – Moody's Investors Service downgraded China's sovereign credit ratings for the first time since 1989, warning that the government’s focus on maintaining growth will increase the country’s debt burden and erode its financial strength.

The issuer rating on local- and foreign-currency debt was lowered one notch from Aa3 to A1, the fifth-highest level, the same ranking as countries including Japan, Saudi Arabia and the Czech Republic. The outlook on the credit rating was revised to stable from negative, with Moody’s saying the A1 rating reflected its assessment that “risks are balanced.”

Moody’s said in March last year that it might downgrade China’s sovereign rating because of the country’s rising debt, declining foreign-currency reserves and concerns over whether the government could push through economic reforms. Standard & Poor’s, a rival ratings company, also said last year it might cut the ranking and put China on CreditWatch with negative implications, while Fitch Ratings downgraded the country's local currency rating to A+ in 2013, its fourth-highest ranking.

The downgrade had a limited impact on domestic markets – the yield on China’s 10-year government bonds in the interbank market rose by 1.15 basis points to 3.663%, while the onshore yuan was unchanged against the U.S. dollar.

Sovereign ratings reflect a country’s creditworthiness and a cut can raise the cost of borrowing for the government and companies both at home and overseas. Some analysts estimate that China’s total debt, including government, corporate and household borrowing, rose to more than 250% of gross domestic product (GDP) in 2016, up from around 200% in 2012.

Moody’s said it expects China’s debt and debt-to-GDP ratio to rise even further.

“The importance the authorities attach to maintaining robust growth will result in sustained policy stimulus, given the growing structural impediments to achieving current growth targets,” Moody’s said in a statement. “Such stimulus will contribute to rising debt across the economy as a whole,” it said.

“While ongoing progress on reforms is likely to transform the economy and financial system over time, it is not likely to prevent a further material rise in economy-wide debt, and the consequent increase in contingent liabilities for the government.”

Those liabilities include the debts of policy banks, state-owned enterprises and local government financing vehicles (LGFV).

The Ministry of Finance criticized Moody’s decision, saying the company overstated the difficulties China faces in boosting its economic growth and underestimated the government’s ability to push ahead with structural reform and expand aggregate demand.

The ministry said that under Chinese law, the borrowings of companies owned by the central and local governments, including LGFV, are not government liabilities and the government has only limited responsibility for them. The ministry said the ratio of government debt to GDP was 36.7% at the end of 2016, and was under control. The ratio compared with the European Union’s “warning line” of 60%, and was lower than the ratios of major market economies and emerging economies, it said.

Moody’s said it expects China’s government debt-to-GDP ratio to rise to 40% in 2018 and to 45% by the end of the decade, which is in line with other A-rated sovereigns.

China’s economic growth is losing momentum as it undergoes a structural shift, with the old driver of debt-fuelled investment running out of steam and consumption yet to fully take up the baton. GDP expanded by 6.7% in 2016, down from 6.9% in 2015 and the sixth-straight annual slowdown.

The central government has been stimulating the economy to meet a growth target set by President Xi Jinping in 2015 of at least 6.5% a year until 2020. That’s led to a renewed reliance on debt-fueled, government-driven investment in infrastructure and an overheated property market.

But the government is also under orders from Xi to rein in leverage. The surge in debt since the global financial crisis, especially among companies, has led to increased financial risks and regulators have been tightening supervision and regulations to try and defuse the dangers.

Pessimism over China’s economic growth prospects has also prompted companies and individuals to move money out of the country, which has put downward pressure on the yuan and forced the central bank to use up its foreign-exchange reserves to defend the currency. The government has boosted scrutiny of foreign-exchange transactions to halt further capital outflows.

“At least over the near term, with monetary policy limited by the risk of fueling renewed capital outflows, the burden of supporting growth will fall largely on fiscal policy, with spending by government and government-related entities – including policy banks and state-owned enterprises (SOEs) – rising,” Moody’s said.

Larry Hu, a Hong Kong-based economist with investment bank Macquarie Group, told Caixin that the downgrade would not deal much of a blow to the cost of borrowing for the government, as most of its debt is sold domestically.

“The downgrade is not that surprising,” said Louis Kuijs, head of Asia economics at Oxford Economics. “We have all been arguing in recent years that China has pursued too much credit growth. One way or another, the state will bear the financial consequences of that.”