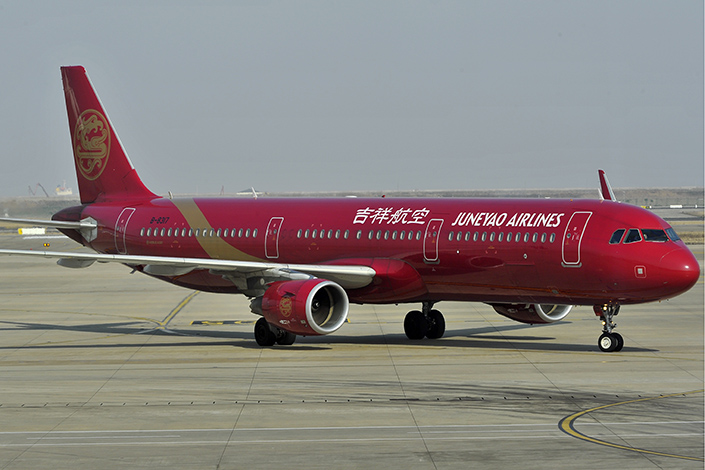 A red Airbus A321 passenger jet of Juneyao Airlines prepares to land at the Shanghai Pudong International Airport in Shanghai, China, on March 3. Photo: IC

(Beijing) – Shanghai-based Juneyao Airlines has joined the global Star Alliance, becoming the first of a new generation of private Chinese carriers to enter one of world’s three major frequent flyer groups as it prepares to launch long-haul flights.

The move also makes Juneyao the first airline admitted under Star’s Connecting Partner program, which opens the alliance to smaller, and low-cost regional carriers. It also comes just three months after Juneyao announced its first purchase of long-haul planes, with plans to buy five Boeing 878 Dreamliners and the option for five more.

Star already counts Air China and Shenzhen Airlines as its two China members, based in Beijing and the southern boomtown of Shenzhen across the border from Hong Kong, respectively.

“With Juneyao Airlines as a Connecting Partner we have achieved two important goals. First, as an alliance we can offer regional airlines an attractive way to connect to our global alliance network, without requiring full membership,” said Star CEO Jeffrey Goh, announcing the move on Tuesday. “Second, with Juneyao Airlines we strengthen our market position in Shanghai, a city which is already served by 17 of our member airlines and which will now offer even better connectivity to our customers.”

But none of the nation’s young and growing field of private carriers, including Hainan Airlines and Spring Airlines, has joined any of the global alliances before now. Both Hainan and Spring now fly numerous international routes, reflecting the global aspirations of the private Chinese carriers.

“In our 11 year history, we have grown into a medium-sized airline operating 62 Airbus A320-family aircraft. Being selected as a Connecting Partner by Star Alliance for providing additional connectivity through Shanghai is recognition of our dedication to service, Wang said. “We hope that Star Alliance customers will enjoy our hospitality.”