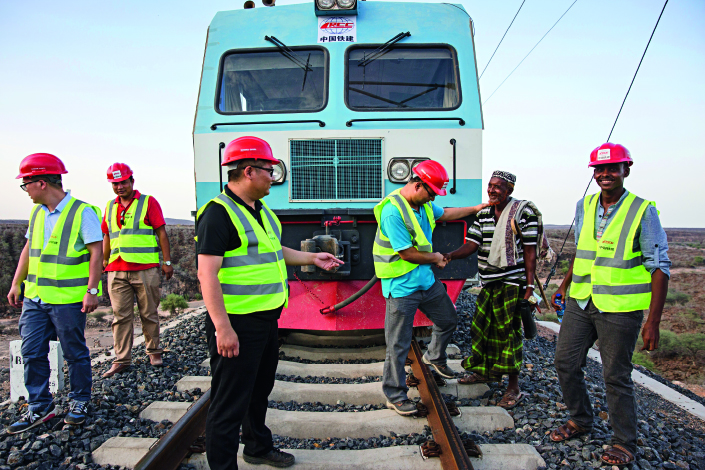 A local resident talks with staff of the Addis Ababa–Djibouti Railway in Ethiopia, on Sep. 28, 2016. The railway was built by the China Railway Group Limited, with a total investment of about $40 billion. Photo: IC

Kenya’s scenic Ngong Hills charmed moviegoers as a setting in the 1985 film “Out of Africa,” a romance centered on dairy farmers in the days of British colonialism.

But these verdant hills will soon be the scene of another kind of farming: A 55-acre wind farm that China’s state-owned Sinohydro Group Ltd. is building to produce up to 14 megawatts of electricity a year.

Sinohydro’s wind farm is among the latest in a growing list of Chinese investment projects in Africa.

Encouraged by central government policies that aim to extend cooperation through the Belt and Road initiative to countries across Africa, Chinese companies have successfully sought out and found opportunities on the continent.

Total Chinese investment in Africa so far reached nearly $3.5 trillion in 2015, a nearly sevenfold increase from 2007, according to a report released jointly by the Ministry of Commerce, the National Bureau of Statistics and the State Administration of Foreign Exchange.

But despite Chinese investors’ growing enthusiasm for projects in Africa, investment in the continent accounted for only 3.2% of China’s total outbound foreign direct investment in 2015, and Chinese companies still face challenges in fast-changing African economies.

Chinese companies have been in Africa since the mid-20th century, but the nature of Chinese investment has changed in recent years.

For decades, Chinese investment was predominantly based on engineering, procurement and construction contracts. This type of contract saw Chinese companies participating in all stages of building up infrastructure to completion of projects, after which maintenance and operation responsibilities were transferred to the local company or government that had commissioned the project.

The Addis Ababa-Djibouti Railway, which opened February as the continent’s first fully electrified transnational railway, is typical of Chinese involvement in Africa today.

A lack of trust in local expertise is a major reason Chinese companies are increasingly involving themselves in more than just the construction phase of projects in Africa.

According to Zhang, when the Fund selects projects to support, it prefers ones that will be run upon completion by Chinese companies or an international staff.

Not only have Chinese companies changed the way they invest in Africa, they’ve also shifted away from previous dependence on government subsidies to finance their investments.

The China-Africa Development Fund, founded in 2006, has invested a total of more than $4 billion in 89 projects across 36 African countries, according to statistics compiled by the Fund. The China-Africa Industrial Capacity Cooperation Fund began operations in April 2016 and has since pledged nearly $550 million to six projects, including a POLY-GCL Petroleum Group liquefied natural gas project in Ethiopia and a CITIC aluminum extraction plant in Angola.

One of the biggest uncertainties faced by Chinese companies in Africa today is foreign exchange risk, Zhang of the China-Africa Industrial Capacity Cooperation Fund told Caixin.

One reason for this is the foreign exchange controls that exist in many African countries, Zhang said. Also, “local currencies fluctuate greatly in value, and there are no foreign exchange hedging products.”

Nigeria is an example of how foreign exchange risk can affect Chinese companies looking to invest in Africa, said Cai Weinian, partner at EY Greater China.

The West African nation is heavily dependent on oil exports to keep its foreign currency reserves stable, Cai pointed out. The recent dip in global oil prices caused Nigeria’s government to implement strict exchange controls and limit outgoing remittances, causing a headache for foreign companies that have operations in Nigeria.

Falling oil prices have caused a similar situation in Algeria, a Chinese national working at a construction firm there told Caixin. Oil and natural gas account for over 95% of Algeria’s exports, and recent measures by Algiers to stem the outflow of foreign currency has resulted in some Chinese companies running out of foreign currency to pay their Chinese staff, the person said.

Further internationalization of the yuan could help protect Chinese companies against foreign exchange risks, Zhang Zhuhui said. The People’s Bank of China has so far signed bilateral currency swap agreements with the central banks of South Africa, Egypt and Morocco.

Chinese companies investing in Africa are also wary of how political upheaval could affect their bottom lines, so they tend to favor countries where the current regime has been in place for a long time, as with Ethiopia and Rwanda, Chinese Academy of Social Sciences researcher Xue Li told Caixin.

Ultimately, Chinese companies need to be aware of the different situations in each African economy, Peking University Economics Professor He Fan told Caixin. And despite the Chinese government’s support for Sino-African projects, it’s up to companies themselves to assess the risk level of each project, He said.