State-Owned Telecom Subsidiary Looks to Africa to Reverse Its Fortunes 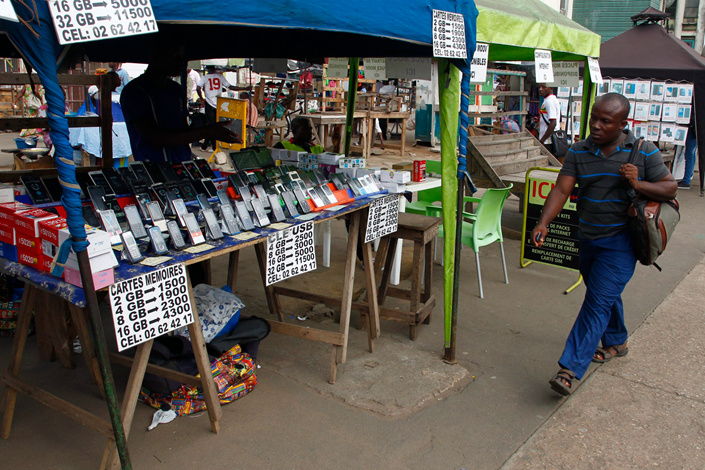 A cellphone vendor displays his wares in Abidjan, Ivory Coast, in April. China Communications Service Corp. Ltd., a subsidiary of China Telecom, is planning a massive fiber-optic network in Africa that will cover 48 countries. Photo: IC

After years of slowing profit growth in a crowded domestic telecommunications market, China Communications Service Corp. Ltd. is hoping a massive infrastructure project in Africa will reverse its fortunes.

In the 1980s and ’90s, the state-owned enterprise was instrumental in developing China’s first long-distance communications backbone, nicknamed “bazongbaheng” — Mandarin for “eight verticals and eight horizontals” — which linked the fiber optic networks of the country’s provincial capitals for the first time.

The information network will be a mammoth undertaking, covering an area three times the size of China. It will pass through 48 countries and 82 major cities, requiring as much as 200,000 km of cable and an initial investment of more than $10 billion.

China Communications, the infrastructure subsidiary of China Telecom, has the support of China’s Ministry of Industry and Information Technology, and has reached agreements with a number of African governments and Chinese industry partners over the Trans-Africa network in the past couple of years.

Now the company faces the challenge of coordinating contracts across dozens of countries, attracting funding, and managing operations while simultaneously trying to ride out a slowdown in telecom infrastructure investments back home.

China Communication’s first major overseas project was Ethiopia’s national telecommunications backbone in late 2004. But the idea to replicate China’s bazongbaheng network in Africa only crystallized on a site visit by Si and China Telecom General Manager Yang Jie to Tanzania in 2014. At the time, China Communications was involved in the construction of Tanzania’s domestic transmission network.

“While working on the Tanzania project, we wondered, ‘Is the situation in Africa similar to China in the ’80s and ’90s?’ Actually, Africa today has greater demand and higher technical requirements than China did two or three decades ago,” Si told Caixin.

The original bazongbaheng program in China involved 48 regional projects between 1986 and 2000, and almost 80,000 km of fiber-optic cable.

By November 2015, China Communications had constructed more than 25,000 km of national fiber optic backbone network in Africa. The push to connect these networks on a continental level really took off after the December 2015 Forum on China-Africa Cooperation, held in Johannesburg. At the forum, President Xi Jinping pledged that China would pour $60 billion into development projects in Africa over the next three years.

Around the same time, China Communications organized the China-Africa ICT Partnership Forum, where it published a blueprint for the Trans-Africa network. There, China’s information technology ministry signed a memorandum of understanding with the United Nations’ International Telecommunication Union and five East African countries — Tanzania, Uganda, Rwanda, Burundi, and Kenya — to develop a broadband platform across eastern Africa.

Propelled by policy tailwinds, China Communications established a dedicated team in early 2016 to oversee the Trans-Africa project. “We have now put most of our staff on the frontline in Africa, including our design team,” Si said.

In June, the China-Africa Development Fund and FiberHome Technologies Group signed a strategic cooperation agreement over the network with China Communications, which is still looking for funding from other Chinese companies, including optical cable and equipment manufacturers, Si told Caixin.

‘Sewing a wedding dress for someone else’

For decades, Chinese firms have been heavily involved in African infrastructure projects, mostly in power generation and transport infrastructure.

In 1975, China participated in the construction of the 1,860-km Tanzania Zambia Railway Authority rail link, providing a crucial interest-free loan after the project had been turned down by Western creditors. More recently, a subsidiary of state-owned China Railway Construction Corp Ltd. signed a $2.26 billion deal, also with the Zambian government, to build an intercity railroad in eastern Zambia.

But information and communications technology infrastructure projects between China and African partners are becoming more common, and China Communications isn’t the only Chinese telecommunications company looking to Africa for new opportunities.

So far, most projects have been limited to the national level, and no other Chinese telecommunication businesses have made concrete steps toward building a continentwide network.

Liquid Telecom, based in Mauritius, currently owns the continent’s largest fiber network, running from northern Uganda to Cape Town, South Africa. Liquid Telecom has laid more than 17,000 km of fiber optic cable so far — less than a tenth of what China Communications plans to build through its trans-Africa network.

While companies like Huawei and ZTE may win some contracts, China Communications has an advantage over its competitors thanks to its privileged position as a state-owned enterprise, an industry watcher told Caixin. “Still, the trans-African network will require contracts to be negotiated on a country-by-country basis. And the completed network will be a massive test of CCS’s operational capabilities,” the source said.

A lack of funding is only one of the obstacles the network is facing, Si said — local partners frequently lack operations experience. China Communications might decide on a country-by-country basis whether to bring in Chinese operators or set up joint ventures with local operators to manage sections of the completed network.

If China Communications fails to execute its plans well, smaller companies will rush in to take its place, and it will have spent all its time and money laying the groundwork for its competitors, the industry watcher said, using the Chinese idiom “sewing a wedding dress for someone else.”

China Communications’ lackluster recent performance in the domestic telecommunications market has made its Africa plans increasingly crucial to the company’s long-term survival.

In December 2006, the company completed its Hong Kong IPO, and maintained double-digit profit growth for years after its listing. But in 2013, the company started to experience a slowdown in revenue growth, and even saw its net-profit margin shrink.

The telecommunications industry’s value chain was changing, with a greater proportion of value being created by internet companies rather than traditional operators and infrastructure providers, Si told Caixin.

The company’s gross profit rate was 12.8% in the first half of 2016, a stark contrast to earlier years, when the figure tended to hover around 20%, the company’s 2016 midyear financial report showed.

Si is pessimistic about the outlook for the company’s domestic business over the next couple of years. “In 2017, the investment expenditure of the three big telecommunications operators (China Telecom, China Unicom, and China Mobile) will be equal to their 2016 expenditure. But this number could actually fall in 2018,” he said.

The latest wave of telecommunications infrastructure upgrading within China, focused on improving the existing optical-fiber network, could be completed this year, Si told Caixin. And the central government announced just last week that industrial standards for 5G, the next generation of China’s mobile network, will be set in 2018, with 5G expected to become widely adopted only by 2020.

The rollout of 5G networks across China could mean a new round of investment in domestic telecommunications infrastructure. But until then, “we can’t just wait for investments from telecom operators — we have to improve our business ourselves,” Si said. He believes the trans-Africa network could help push the company out of its current financial rut.