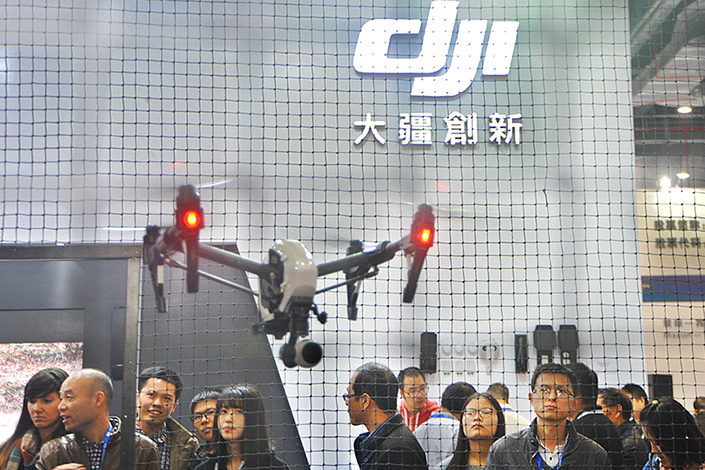 (Beijing) — Civil aviation and commerce officials in China take undisguised pride in the nation’s status as the source of about 70% of all drones sold worldwide every year, but recent drone scares at a major airport could have sparked a regulatory reset for rules regarding unmanned aerial vehicles (UAVs).

“The Ministry of Information and Technology (MIIT) has been delighted to see the development of commercial drones,” said a government source, adding that the ministry “attaches great importance to China’s edge in this emerging field.”

Contributing in a large way to the industry’s success has been China’s relatively relaxed regulatory environment for drone flying. For years, drones were allowed to propel through China’s skies on regulatory autopilot: Regulators and lawmakers tried to keep their hands off drones rather than risk slowing a business area where China is way ahead of the curve.

But recent spate of drone scares at a major airport has sparked a reset for the regulatory environment and a government campaign to replace a set of vague, civil aviation “advisories” with hard rules aimed at keeping the skies safe for all aircraft.

The incidents around April 20 grounded or diverted more than 100 airline flights at Chengdu Shuangliu International Airport in southwestern Sichuan’s provincial capital. The scare began when multiple airborne drones were detected near flight paths for commercial airliners, which can be crippled or crash if a drone gets sucked into a jet engine.

The incidents prompted Vice Premier Ma Kai to announce internally in early May, sources said, that the government would make drone safety a top priority for the nation, especially for the Civil Aviation Administration (CAAC). Since then, Ma has held frequent discussions with industry leaders and legislators on drone safety.

The discussions are laying the groundwork for what Caixin learned are a series of drone-related regulations expected to come to light before September.

And some new rules are already taking effect. For example, since mid-May all new and existing drone owners must register with the CAAC. And starting June 1, every company or individual with a drone that weighs more than 250 grams must be properly registered and adhere a personalized QR code sticker on the aircraft.

“Central government authorities have been vexed by recent, close encounters in Chengdu,” the official said. “When push comes to shove, civil aviation safety will always be front and center, even if it comes at the price of the industry’s growth.”

Until now, China’s current rules for drone owners and operators have been neither comprehensive nor clear. Three, vaguely worded documents that can best be called “working guidelines” published by the Civil Aviation Administration (CAAC) as non-binding “advisories” carry no legal clout. They simply sketch out the nuts and bolts of what regulators prefer, covering issues such as drone “pilot” training and no-fly zones, such as airports and densely populated areas.

These advisories also cover “geofencing” software, which is embedded in a drone and bounces the aircraft out of any geographical borders when in flight; so-called “cloud” systems that provide in-flight tracking; and standards designed to keep a drone at a safe distance from other flying objects.

The CAAC also recommends that a drone operator consume no alcohol within 24 hours of a flight, and that all flights be conducted in fair weather and only during the day.

When investigating an aerial collision or near-miss, authorities on the scene apply the CAAC’s General Flight Rules, a set of regulations covering manned aircraft and commercial flights enacted 20 years ago and most recently revised in 2007 — before drones were available to the public.

Under the rules, every aircraft operator before take-off is supposed to get permission to use air space from the military, which has the final say for all aircraft flights in China.

But CAAC rules have been the closest thing to operating regulations for drones. And they’ve been supplemented by aviation officials who, because the advisories lack legal consequences, have relied on private contacts with company representatives to keep a finger on the pulse of the industry.

The most common industry contacts work for Shenzhen-based DJI Innovation, the world’s largest drone maker. Almost every drone sold to the public in China is made by DJI, a company that’s prospered by relying on low-cost manufacturing, an almost non-stop stream of new products and aggressive global marketing.

DJI is more than willing to follow orders from governments at all levels. It’s even been known to disable every unit in a particular community to meet security demands before even a brief visit by President Xi Jinping, according to a company source who asked not to be named.

The source admitted that DJI will essentially agree to anything the government asks, with close to no obligation to protect the identity of drone users.

DJI once complied with a government request to develop a platform giving every drone a unique identification for in-flight tracking, said the source. As a result, DJI technology became the basis for a government-required “cloud” tracking system.

“DJI practically handed over the algorithms to the military and authorities,” the source said, adding that DJI was tapped for preventive solutions after “a couple of encounters” that left “the military livid.”

As a company spokesperson acknowledged, “We give the authorities what they ask for, whenever we can. We want to survive, don’t we?” DJI Vice President Shao Jianhuo explained. “Our enterprise is deeply rooted in China, and we owe our success to this nation every step of the way.”

DJI makes sure its drones cannot fly inside Beijing’s Sixth Ring Road, for example, which circles the city far from the urban zone. The company’s products are also fenced off from sensitive facilities such as military bases.

But on the regulation front, DJI has not kept silent about its displeasure with some of the government’s work. The company over the years has intensively lobbied against one-size-fits-all regulations that would, for example, prevent drone use with the limits of entire cities and require that each existing drone be registered with the government.

But DJI is not stopping Beijing authorities from moving forward with the new regulations as well as an assessment of what is now the world’s largest consumer drone market.

A full “census” of drones nationwide will be conducted through August, and drone-flight tests will be conducted to identify and purge unsafe behavior. These steps will lay a foundation for a multi-phase overhaul of the industry's supervision, leading to a legal system approved by the nation’s lawmakers.

The legal “clean-up will be done in three phases,” according to a State Council-approved document on the drone industry tightening obtained by Caixin. “The first phase, which runs until the end of May, will involve taking inventory of drones, training facilities and users in order to obtain solid figures to work with.

“In the second phase, before August, authorities will ramp up measures to educate against and penalize illegal flying, with special emphasis on airports (and) sensitive facilities.”

Government agencies including local civil aviation offices, police, the People’s Liberation Army Air Force, and sports administrations will “share their experiences and findings before the end of August, compiling best practices and, if applicable, hold discussions that can spread to the national level,” the document said.

Later in the year, the document said, the nation’s legislators will start working on a specific legal framework.

Amid the regulatory tightening, nerves in the industry are growing taut. No one, especially companies such as DJI, want to see new rules upset the profitable business environment.

As a result, DJI is expected to lobby for rule-makers to opt on the side of leniency.

And other organizations are getting involved, too, reaching out for what they see as a business opportunity.

For example, the Aircraft Owners and Pilots Association (AOPA) — which CAAC stopped supervising in 2015 — is now promoting itself as the best and most professional agency for training drone pilots and issuing flying certificates, which can cost around 10,000 yuan each.

Industry sources suspect AOPA members may be connected to the recent drone flights near Chengdu airport. The association’s Chengdu office chief, Zhang Wei, owns a company that makes a “cloud” system for tracking drones that could benefit from a crackdown on drone owners. And AOPA operates a service called “U-cloud” that’s similar to the system sold by Zhang'’s firm.

DJI has declined to comment directly on the Chengdu incident, but a company spokesperson said what happened did not seem to reflect the behavior of regular drone hobbyists, adding that it may have been “a premeditated crime with an agenda.”

Industry groups inside and outside China, some with vague ties to the Beijing government, also appear poised to jump on ample business opportunities.

Peter Van Blyenburg, president of a Paris-based group that represents the drone industry called UVS International, is working with European Union regulators to build a drone-management system. He also runs a company that has developed a system for assessing a drone’s safety performance, a source told Caixin.

Blyenburg has proposed putting his company’s device in 10% in of DJI-made drones, which would give them special consumer product quality certification in the EU, but DJI declined to cooperate.

Industry groups now involved in the effort to build a regulatory framework for the drone industry had less to do in the years when CAAC’s vague advisories were the only law of the land.

“Industry associations have helped educate the industry, and have gleaned a lot of knowledge in this period of transition,” a source said.

And soon the world’s largest drone market and manufacturer may be a frame of reference for other nations interested in keeping order in their skies.

“China seems to be getting ahead on this one,” said an industry expert.

But drone enthusiasts have adopted a wait-and-see attitude.

“China missed its opportunity to get ahead in the car industry,” said one drone owner. “If regulations, or a lack of them, drag down the rising drone industry, people will blame the government.”