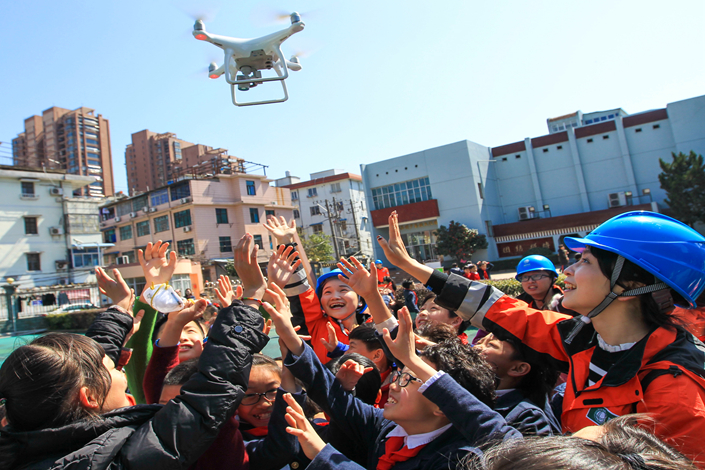 Children watch a drone demonstration in Wenzhou, Zhejiang province, on March 2. China is considering requiring real-name registration of drones, which until now have been loosely regulated. Photo: IC

(Beijing) — Each drone that flies in China’s skies may soon be traced back to an individual owner, as the government considers guidelines that will require real-name registration in the loosely regulated sectors.

The move comes as drones have seen soaring sales but also increasingly have become hindrances to civil aviation.

“Our foremost obligation is to register air vehicles and keep track of drone flyers,” said Feng Zhenlin, president of China’s Civil Aviation Administration, in an interview Saturday on the sidelines of the “two sessions” — the meetings of the National People’s Congress and the Chinese People’s Political Consultative Conference.

“We are looking into a real-name registration system,” Feng said.

Analysts say such a registration system is long overdue. China’s skies have become crowded with unmanned aerial vehicles (UAVs), from pocket-sized selfie makers to hefty crop dusters, which have remained largely unregulated as Beijing fears stunting the industry’s growth, according to analysts.

“Because the risks involved with drones have increased with their numbers, they are often the culprits behind (aviation) accidents,” Feng said. “We need to straighten out responsibilities.”

The regulation of commercial and recreational drones has recently become a sticking point in China, as over two dozen flights have been interrupted in the first three months of this year by aircraft that have strayed into no-flight zones.

“If the sky was a market, and state-owned airlines were department stores, drones would be wandering street peddlers,” said Liu Yang of the Civil Aviation Management Institute of China (CAMIC). “There’s no way to hold them accountable if they cause trouble.”

“The price of illegal behavior for drones is extremely low,” Liu added. “If a drone falls and injures someone, the owner can just walk away and ditch the cheap aircraft to shirk responsibility.”

Feng, the civil aviation president, adds that authorities may allow exceptions for real-name registration for smaller amateur drones — requiring instead, for instance, the programming of no-fly zones into UAV systems before they reach the market.

China lacks comprehensive regulations to keep its swarms of drones, which consultancy Analysys says was worth 3.95 billion yuan ($572 million) in 2016, in line.

“Drones are a typical instance where technology is ahead of regulation,” said Oliver Wang, a spokesman for DJI, a Shenzhen-based market leader in drones. “We are waiting for a clear set of laws saying how drones will be regulated and what the consequences will be. Companies are complying with what rules there are through self-discipline.”

In three recent and vaguely worded provisional guidelines, China has prohibited UAVs from flying in designated zones, including near densely populated cities, military bases and airports, and has stipulated that drone pilots must receive training before sending their drones into the sky. There are also rules that forbid illiterate and drunken people from flying drones.

But the “virtual fences” that repel trespassing drones by intercepting electronic signals that have yet to be officially erected by authorities have been put in use by some individual drone makers. As of now, registration with the “U-Cloud” system, meant to monitor the vehicles, is advised, though not required, by the government.

More stringent rules, such as Beijing’s ban on flying inside The Sixth Ring Road — meaning pilots have to drive two hours out of town to set the machines airborne — have dampened market enthusiasm, DJI’s Wang says.

“This is the price for safe and orderly skies, and there’s a lot more to be done,” said Liu of CAMIC. “Drones should be treated like any other aircraft, not like toys, so safety should always come first.”