Lighting Candles Under a Banyan Tree: How Businesses Are Coping With a Massive Shutdown in Dali

By Chen Liang and Wu Gang 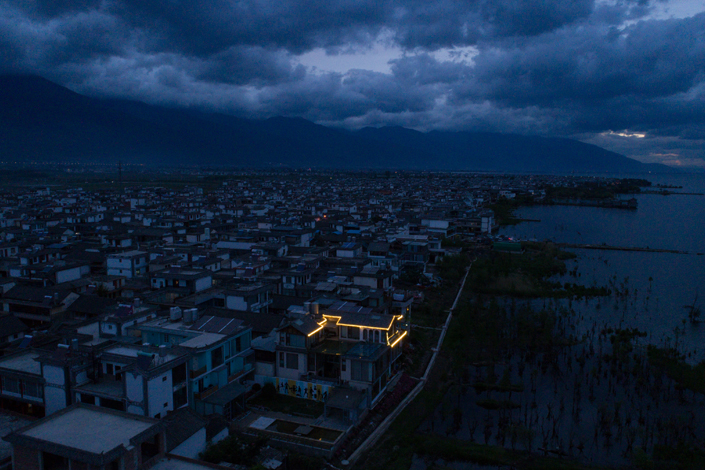 The light of a hotel stays on 11 days after all hotels and restaurants were shut by the local government of Dali, in Yunnan province, starting on April 1. Businesses will resume in a year, when sewage treatment facilities are ready. Photos: Chen Liang/Caixin

(Dali, Yunnan province) – On April 9, before the sun set, most shops and hotels on the shores of Erhai Lake, a bustling tourist destination in Yunnan province’s Dali prefecture, have closed their doors.

A cab driver slows in front of a passerby: “Looking for a taxi? There are no places to stay here – the entire lakeside is closed. You’ll have to go back to the old town,” he says.

But few people pay attention to him, because if you walk a few steps further, you can find another driver making the same offer.

The streets by the lake are nearly empty. Scattered tourists are hunting for a hostel, but they are turned down by hotel owners who give the same answer: “Sorry, we are closed from today.”

Like other hotel owners, Tian Jing also politely refuses guests looking for a place to stay. The government has asked all such owners to suspend operations, and all employees have left, she says.

On March 31, the Dali government held a press conference, stressing that the city cannot wait any longer to protect Erhai Lake, which served as the main lifeline at this popular resort. The government pointed out that the lake has been polluted by runoff from livestock and poultry farms, agriculture, raw sewage and waste from urban and rural homes. It said the catering industry – meaning the thousands of bars, hotels and restaurants dotting the lakeshore and beyond – was the fastest-growing polluter.

The government ordered all restaurants and hotels by the lake to shut down within ten days.

The order, said to be the harshest protective measure in Erhai’s recent history, has triggered huge waves of concern around the lake.

Tian couldn’t help recall the exact time when she first came to this beautiful place in southwest China.

In 2015, Tian brought students from her fine art school to paint by Erhai.

“I was astonished by the red clouds at dawn, which were reflected on the lake water,” Tian said, adding that she decided at that moment to stay. “Given the vastness of heaven and earth, my personal experience appears unworthy of mentioning.”

Tian closed her art school and sold some of her properties to open a hostel in Caicun with a view of Erhai. She invested 3 million yuan in the project, borrowing one-third from various channels.

Fortunately, last year, the occupancy rate at her hostel increased to about 75%. She raised more money to ease her debt burden. In March this year, she paid taxes, went through the annual government inspection, and was happy that her business could further prosper.

Then came the government order to shut all Erhai businesses.

On the night of April 9, the last night before the government deadline, hotel owners of Caicun gathered under a banyan tree by the lake, to light candles and mobile phone flashlights.

“We want to say thank you to Caicun and Erhai, for the bittersweet memories they have given us,” a hotel owner who declined to be named said.

Tian is worried about her future, suspecting that a year later she will not be able to reopen the hostel.

“I don’t know what to do next, my entire life plan is messed up,” she said. “Maybe I’ll draw some pictures about life by the Erhai, and sell them to people who like them.”