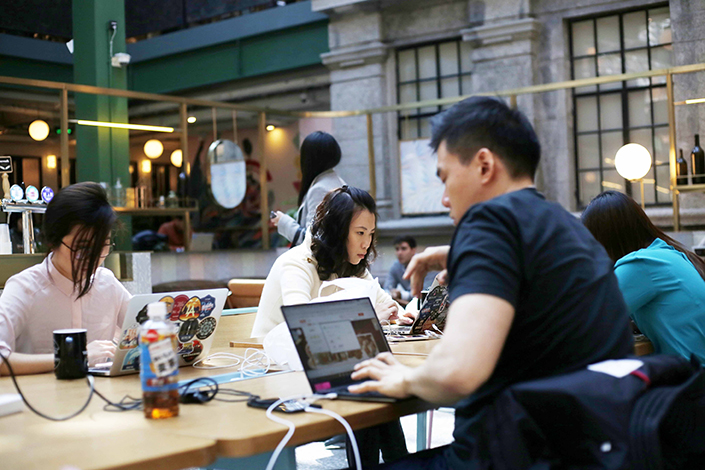 Chinese employees work at a WeWork co-work space in Shanghai, China, on Feb. 28. WeWork is moving strongly into China, equipped with unique services and an ambition to serve more customers. Photo: IC

(Beijing) — Just a year after setting up shop in China, shared office space specialist WeWork already has six locations in Beijing and Shanghai, and is eying other cities like the boomtown of Shenzhen, next to Hong Kong.

But like other foreign sharing-economy specialists such as Uber and Airbnb, WeWork is finding the road to China filled with competitors. Those include firms like Naked Hub, founded by foreigners in Shanghai, and a local giant that recently emerged with the merger two homegrown leaders, URWork and Hongtai New Space.

URWork made additional headlines this week when it announced it raised nearly 400 million yuan ($58 million) in new funding.

Others getting into the space include big names like Tencent Holdings Ltd. and Amazon.com, which operate incubators, accelerators and shared workspaces.

Despite the competition, WeWork, has opened in six locations in Beijing and Shanghai over the past year, and is set to open two more soon. The company made headlines last year when it got $700 million in funding from two Chinese groups, including hotel operator Jin Jiang.

Despite its foreign roots, WeWork is very much targeting local customers for its shared spaces that offer entrepreneurs desks, meeting rooms and coffee bars, as well as other communal facilities. It counts local Chinese as 80% of its customers, as it focuses on a philosophy that says the company is not merely “about space, but about community.”

This week Caixin interviewed WeWork Asia Pacific managing director Ole Ruch, who discussed his company’s rapid expansion in China. The following are excerpts from the interview:

Caixin: How is the China market different from others?

WeWork: There are a number of similarities between China and all other markets. But the way we execute might be different. For instance, we have to create different sitting arrangements, because we’ve found that the Chinese members want to sit more face to face, than back to back. We need to create larger conference rooms because typically meetings are a lot bigger in China than they are in the U.S. We changed a lot of consumable amenities, like coffee and beer; and what we learned as well about Chinese consumers is that they want to have hot water, and they want to have more selection in tea.

WeWork: The biggest challenge is actually finding the right people that we can empower to build the big business for us here in the Chinese market. Whenever we enter a new market, we have a number of partners, including real estate companies, investors and marketing professionals. Our two main partners here in China are Hony Capital and SinoOcean Group, which helped us in funding and real estate solutions.

Caixin: WeWork now runs four locations in Shanghai and two in Beijing. Do you have plans to expand to other cities?

WeWork: In the future, we do want to continue to expand our business to markets like Shenzhen and other markets across the greater China region. We researched a number of cities, inside and outside China, but it doesn’t necessarily mean that we are going to open them in the short-term, because we spend almost a year planning and preparing for a new city.

Caixin: You’ve started to attract big enterprises as members. How is that doing in China? Are there any differences in demands between startups and big firms, and any plans to offer differentiated services?

WeWork: The larger companies that are coming to us are in a much earlier stage in China than in the other markets. It took us six years to build the business for enterprise customers in the Unites States, and in China it took us six months. Enterprise friends typically tend to have more specific distinct needs. They want IT services, special design, and they want to build a mix between their internal culture and WeWork culture.

Caixin: How do you find the competition in China?

WeWork: We don’t see ourselves as a co-working space. We are not about physical space, we are about the energy, community and collaboration. When we asked our members what you use WeWork for, 70% said that they use it for collaboration, and 50% actually do business with each other, they trade with each other, they buy services and use the WeWork community to find opportunities to broaden their business. That’s really the unique value of WeWork.

Caixin: You’ve worked in sharing economy companies for a long time, from Groupon to Airbnb, and now WeWork. How do you think the industry has developed in China?

WeWork: I’m very impressed by China’s sharing economy development. I’ve never seen such a dynamic market where you can share everything from bikes to power banks, spaces, cars. That’s incredibly fascinating. Sharing as a concept is a pivot back to where we used to be. A few generations ago when you grew up in families and communities, people always shared resources and knowledge, and even their capital. Sharing is a concept that has been with us for hundreds of years. And it is also a concept that we are coming back to in the world.