Can China’s Titanic Put an Obscure County on the World Travel Map? 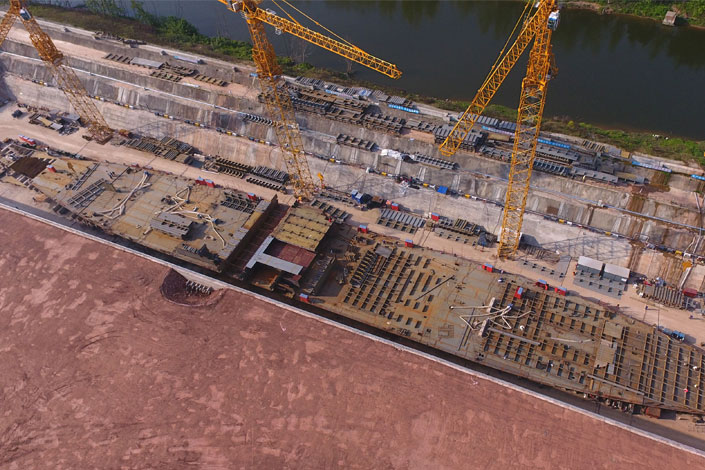 The foundations of the Titanic replica are laid in Daying, China. Set to open in 2019, it will permanently be docked riverside and will become the world's first life-sized replica of the doomed ocean-liner. Photo: Visual China

(Beijing) — As Disney unveils a theme park based on Avatar, the most successful movie of all time, another venture inspired by a separate James Cameron blockbuster, Titanic, is taking shape in China.

Walt Disney Co. is betting that its $500 million attraction, Pandora, which opens at Disney World’s Animal Kingdom near Orlando, Florida on May 27 will help its theme-park business continue a hot streak eight years after the film came out.

Similarly, a small town in the Chinese province of Sichuan is betting big that a full-sized replica of the doomed ocean liner could boost its local economy. The 269-metre New Titanic in Daying county, about an hour’s drive from Sichuan’s capital, Chengdu, includes the original ballroom, observation deck and first-class cabins from the vessel, all fitted with historically accurate fixtures. Its kitchen will serve up the same European fare passengers enjoyed a century earlier. And, in a morbid twist, it will also simulate the experience of being aboard the ship at the moment it crashed into the iceberg, a move that has been criticized by families of some victims and survivors of the 1912 disaster as being in “poor taste.”

The Chinese builder had considered scrapping the dramatic iceberg crash when the British Titanic Society turned up the heat in December, but later decided to go ahead with it as planned. They managed to convince critics that this special setup would not be for entertainment purposes, said Su Shaojun, president of Qixing Energy Investment Group, the company behind the project. It is to raise awareness of emergency evacuation procedures and particularly the “women and children first” principle.

Su said rebuilding the Titanic also aims to revitalize the spirit of “universal love and responsibility,” during a disaster, which is “positive for the society.” But during a pop-up pre-sale last year, the most expensive package cost a whopping 288,888 yuan for a one-night stay for a group of four — the same price as an Audi A3 in China.

The company’s decision to build the huge vessel in Daying county, an obscure town with a population of half a million people in southwest China, has also raised eyebrows. But the area is already home to another popular site, a replica of the Dead Sea, which has put this once backwater town on the tourist map. The massive Dead Sea theme park has attracted 3 million visitors on average every year since it opened in 2003, according to Su.

Although more than 80% of theme parks in China are located in the more developed eastern and southern coastal areas where household incomes are high, there is growing appetite for entertainment venues in the rest of the country, according to a recent report by real estate group Colliers International.

Last year, the country’s largest entertainment and property conglomerate Dalian Wanda Group opened theme parks in Nanchang, the provincial capital of Jiangxi in the south, and Hefei in the central Chinese province of Anhui, and it plans to open 13 more in second-tier cities by 2020. Some analysts have raised concerns that these projects might turn into white elephants after the initial excitement fizzles out, as household incomes in inland China remain comparitively low. But can the new Titanic make the small town of Daying and its tourism industry unsinkable?

Bringing Back the Legend

James Cameron’s 1997 tear-jerker starring Kate Winslet and Leonardo DiCaprio was the highest grossing foreign film on the Chinese mainland for nearly a decade, until Transformers: Revenge of the Fallen took away its box office crown in 2009. The Oscar-winning movie, which recreates the ill-fated maiden voyage of the Titanic which claimed the lives of more than 1,500 passengers, was also a long-time box office champion in the global market.

While the original RMS Titanic was considered an “unsinkable engineering marvel,” the replica will remain permanently docked in an artificial reservoir built along the Qi River that flows through the landlocked province. The $140 million project was initially slated for completion by mid- 2017, but the launch date has since been pushed back to 2019. Three years into the project, only the foundations of the ocean liner have been completed.

Su did not offer any reason for the delay, noting only that the construction team had to undergo intense preparation for the project.

“After the RMS Titanic sank, nobody saw its complete set of blueprints,” he told the China Daily. “Many blueprint fragments of the ship had found their way into the hands of collectors or remain missing. Our team has painstakingly tried to collect these pieces of the puzzle,” he said in a December interview with China Daily.

Su has also roped in Bruce Beveridge, the U.S. author of a two-volume book on the Titanic, and Peter Lamont, who recreated the sets or the film in 1996, to help with the design work. He has even named actor Bernard Hill, who played the role of the captain in the film, the honorary life-time captain of the new Titanic.

His sales team has also been testing the water since last summer, with pop-up sales of a limited number of tickets. But their price tags shocked the market, with the cheapest overnight stay ticket retaining for 2,600 yuan ($370), or seven times what the Shanghai Disneyland charges for a day.

Su said the expensive packages were for those who would like to stay aboard the Titanic overnight and enjoy cruise services, but a simple tour of the ship would cost only around 200 to 300 yuan, which is the average price for a one-day ticket to a theme park in China.

Su didn’t say how many tickets have been sold during the flash sale.

But skeptics of the project including Xu Weiming, co-founder of Fang Tang Think Tank, which follows the theme park sector, questioned the pricing saying the permanently moored replica didn’t offer either sea views or a real cruise experience.

Xu also said that although the RMS Titanic was the largest ship afloat in its time, modern cruise liners were four times as large.

Su argues that it would be impossible to make a Titanic replica that could be ocean bound, because it wouldn’t meet modern safety standards. But he was optimistic that his model will be a crowd-puller because once it’s completed, the new Titanic will serve as the centerpiece of a sprawling tourist resort that will include a Venetian-style shopping town and another fairytale-inspired themed park.

“The theme itself — rebuilding the Titanic — is original and creative, which will attract people who are interested in the disaster,” said Timothy Chen, East Asia director of commercial real estate group Colliers International, “And the project is part of a larger Romandisea Resort, which will be a catch-all site with scenic spots, shopping and entertainment.”

The Chinese project isn’t the only attempt to revive the doomed ocean liner. A multi-millionaire South African lawyer, Sarel Gous, announced plans to recreate the Titanic in 1998, but abandoned it in 2006 after a huge cost overrun. In 2012, Australian businessman Clive Palmer embarked on creating an almost identical remake, but the official website of Blue Star Line, the company established for the project, hasn’t made updates since 2014 and its trademark on the U.S. Patent and Trademark System was left to expire in 2015.

Titanic and the Dead Sea

Support from the Daying government has been a major reason that has kept the Chinese project afloat so far. Local authorities have not just helped with the site selection and getting hold of land, but they have also offered financial support, Su said, without disclosing details.

Thanks to the previous success of the Dead Sea resort, inspired by the world’s saltiest water body, Daying — which administratively became a county in 1997 and doesn’t have much history — is already listed among the top 10 tourist hubs by the Sichuan provincial government, together with some other towns with a rich past, such as Dujiangyan, home to China’s oldest irrigation and flood control system, and Mount Qingcheng, an important Taoist center.

“The concept of building historic replicas to attract guests has existed for a very long time and has been success in many countries,” said Thomas Megna, president of the Asia Pacific Division of Themed Entertainment Association.

“Windows of the World is a good example,” Megna said. It was one of China’s first theme parks opened in Shenzhen in 1994, with replicas of 130 iconic buildings including the Eiffel Tower in Paris, the Leaning Tower of Pisa from Italy and Mount Rushmore from the United States.

With China now riding a theme park wave, consultancy group Aecom expects it to surpass the U.S. as the largest theme-park market in the world by 2020, attracting 221 million visitors every year. It is attracting big names like The Walt Disney Company and local backers like Dalian Wanda Group, who are competing head-to-head to grab a stake of this lucrative market.

While foreign brands such as Disneyland in Shanghai and Universal Studios in Beijing have the competitive edge because customers were already familiar with their concepts, this doesn’t mean that Chinese companies are destined to fail, said Chen from Colliers International.

Many local companies are targeting residents in smaller cities and many of them are trying to lure visitors with special Chinese-style architecture, Chen said. Even Romandisea, the resort that houses the Titanic, also includes another area that recreates life in the ancient Chinese state of Qi, a civilization around 2,500 years old.

Su foresees smooth sailing for the Titanic project and expects it to attract between eight to 10 million visitors each year. “If foreigners can make Kungfu Panda films, why can’t we build a Titanic?” he said.