By Li Huiling and Hou Wen 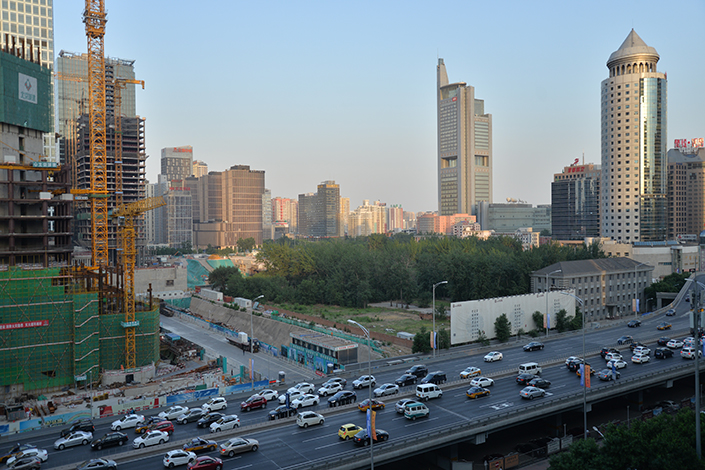 The Z3 plot was seen as the most valuable land of the CBD area in East Third Ring Road of Beijing, which is still undeveloped space. Photo: Ma Minhui/Caixin

(Beijing) – An unsettled land deal between a subsidiary of Anbang Insurance Group and the Beijing city government has left several real-estate developers in limbo and the land they paid billions of yuan to sit idle for more than six years.

Across the street of the busy construction site of the 118-story China Zun tower, which will be the tallest building in downtown Beijing, several land plots enclosed by brick walls have remained barren and empty, surrounded by mushrooming skyscrapers in the city’s central business district, where land available for construction has always been scarce and pricey.

“It has been idle like this since I came [to work] here about five or six years ago,” a gate guard said.

The four plots, labeled by city land authorities as plots Z3, Z4, Z5 and Z6, are adjacent to one another in the same block, within sight of the landmark World Trade Center towers in the eastern part of Beijing.

They were known as the last untouched land in the central business district. In a highly-watched auction in December 2010, the four plots, with combined construction space of 580,000 square meters, were sold to different companies for a total of more than 11.8 billion yuan ($1.72 billion).

But construction on the plots never began. Sources close to the matter told Caixin that development has been hindered due to “government reasons,” as the Beijing Municipal Bureau of Land and Resources hasn’t been able to transfer the land to the bidders.

Initially, before the land authority auctions off land, it hires a “preliminary land developer” to do the initial stage of development, such as demolition, consolidation and basic infrastructure construction. The authority can then auction the land for residential or commercial developments.

In this instance, the preliminary developer is Beijing Central Business District Development and Construction Co. (CBD Development), a subsidiary of Anbang Insurance. It cleared the area, which was then auctioned as four plots. But CBD Development hasn’t allowed the transfer, despite requests by the local government, which is losing future tax dollars and amassing a huge late-penalty fee.

According to a document from the Beijing land and resources bureau seen by Caixin, CBD Development said it won’t transfer the land because needed work hasn’t been finished for preliminary development and it wants a larger fee for its job. The dispute has blocked further development on the land.

A fixed rate – usually 8% of the total costs of initial development – is paid to preliminary developers as profit. But “Anbang is not willing to take the fixed-rate payment,” an industry source said.

“We have repeatedly negotiated with the government, and officials have talked with the preliminary developer many times – but nothing works,” said Xu Li, chairman of Shanghai-listed Beijing Vantone Real Estate Co., which bought the Z3 plot with partners.

Beijing Vantone and partners made a full payment of 2.5 billion yuan for the plot as early as January 2011 and planned to start construction of a commercial and office complex on the site in 2012. The Z3 winners estimated that the complex would generate about 700 million yuan in rent every year for investors.

But not a single brick has been laid on the ground for the project, leaving the investors holding losses and unpredictable risks. The later the project is completed, the greater risks it will face due to changing market conditions, a source from Z3’s investors said.

The Beijing government also is feeling the sting of the delay: It is losing tax revenue, but also faces a sizable penalty. According to the contracts signed by the city land authority and the Z3 buyers, the government must pay daily penalties for delaying the land transfer. As of April 2017, according to Caixin calculations, the penalty total has exceeded 2.5 billion yuan.

“We are upset and don’t know what to do,” said a staffer at China International Capital Corp . “A five-year delay has exhausted us.”

In January 2011, one month after the auction, the CICC-Beijing Vantone consortium paid for the purchase and signed the contract with city authorities in November of that year.

According to the contract, all initial development of the Z3 plot was to be completed and the land authority was to formally transfer the land to the consortium to start construction in early 2012.

In March 2013, the Z3 investors set up a joint venture – Beijing Jingangtong Real Estate Development Co. – to run the project, with planned investment of 4.2 billion yuan. Beijing Vantone holds 30% of the venture, while CICC and its subsidiary hold 35%.

But the land transfer has been repeatedly delayed. Between January 2013 and April 2014, Z3’s investors and Jingangtong made 13 attempts to push Beijing authorities to complete the land transfer — without success.

“We are very worried because huge losses occur every single day of delay,” a manager at Jingangtong said.

Part of CICC’s investment came from funds raised from various investors that are managed by its subsidiary CICC Jiaye. And Shanghai-listed Vantone has been under shareholder pressure over the stuck investment.

Losing patience, Jingangtong staffers entered the Z3 site in January 2014 to carry out land survey and clean up the site, but were stopped by CDB Development.

Both the Beijing land and resources bureau and CDB Development declined Caixin’s request to comment on the matter. The Central Business District Management Committee, under the Chaoyang district government – which is in charge of coordinating development projects in the area – said in a reply to Caixin that preliminary development was finished in 2009 and the holdup was due to a disagreement over the payment.

A source close to the matter told Caixin that the Beijing land authority and Chaoyang district government have ordered CBD Development to complete required procedures and clear hurdles for further development, and pledged to take legal measures to revoke the preliminary development rights if CDB Development doesn’t hand over the land.

In July of last year, CDB Development agreed that Jingangtong could launch a land survey on the Z3 plot after the mediation by Beijing officials. But further work has since stalled.

Although officials have vowed several times to solve the problem, developers have seen little reason to feel hopeful. “We have no idea how long will we wait,” a source from CICC said.

Minsheng Bank paid all land fees in 2013 and Anbang Insurance paid about half of the Z5 price in 2012. Payment regarding the Z6 plot is not clear.

“Anbang Insurance may have hoped to obtain the development rights of all four plots after completing the initial stage of development, but the plan failed,” said a source close to the matter who declined to be named. “It is not satisfied earning the fix-rate payment for the initial development.”

Sources from CICC told Caixin that some of CICC Jiaye’s investors have lost patience and decided to exit their investment in the Z3 project.

As CICC has looked for new investors, Anbang Insurance showed up. “They contacted us and proposed to take over all the investments,” said a CICC source.