Insurance Dull and Boring? Not in China 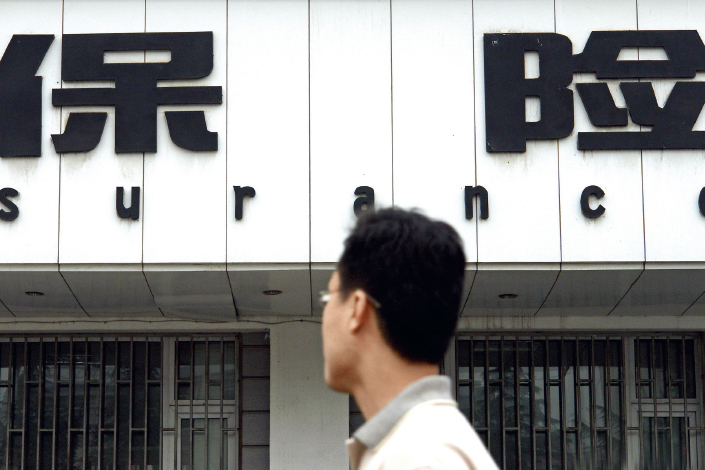 Under new leadership, the China Insurance Regulatory Commission (pictured above) has told companies they need to go “back to basics” and return to their fundamental mission of being “cautious and prudent” investors. Photo: Visual China

(Beijing) – A 10-year ban on the billionaire head of one of China’s most aggressive insurance companies, a ban on sales of risky but lucrative short-term life insurance policies, misuse of billions of yuan of premium income, hostile takeovers and the downfall of the country’s top insurance regulator on corruption allegations.

Just some of the headline-grabbing events that have shaken the dull and boring business of insurance in China over the past year. And there may be more to come as the authorities intensify efforts to tame an industry that’s been on a wild ride over the last few years helped along by lax supervision, liberalization that’s opened the sector to aggressive competition and expansion, and a good dollop of corruption.

The China Insurance Regulatory Commission (CIRC) has put the industry on notice. Chen Wenhui, a vice chairman at the watchdog, told companies back in December that they need to go “back to basics” and return to their fundamental mission of being “cautious and prudent” investors. He is now running the commission after Xiang Junbo, a colorful character who led the organization for almost six years, was put under investigation by the Communist Party’s anti-graft watchdog in mid-April.

Since Xiang’s departure, the CIRC has intensified a crackdown that began last year as part of a wider campaign to rein in financial risks and leverage ordered by the Chinese leadership. The commission has issued five major policy documents to tighten oversight over all areas of insurance companies’ operations – from investment activity and risk control to marketing and the design of policies. The aim is to uncover and stop irregular, illegal and risky practices that could threaten the solvency of insurers and the industry as a whole.

Companies have been ordered to examine their existing products to ensure they comply with the new rules, and assess their financial health and all aspects of their business. Results of internal reviews on capital risks have to be submitted by June 15 and any problems identified with their life insurance products must be rectified by Oct. 1.

“We’re having to carry out exhaustive inspections to root out risks,” an executive with an insurance company, who declined to be identified, told Caixin.

Market analysts said the slew of regulatory moves indicated regulators’ determination to clamp down on misconduct, but their impact will depend on how strictly they are implemented.

“These problems are like ulcers that will create more pain in the future if they aren’t fixed as soon as possible,” one analyst told Caixin.

The root of the industry’s current turmoil can be traced back to 2011 when Xiang, a former auditor and central banker, took the helm at the CIRC. He embarked on a strategy to open up the sector to competition and dismantle rules that had restricted where insurers could invest their premium income. The aim of the overhaul was well meaning – to improve companies’ competitiveness, help them boost returns to their policyholders, and channel money into investments that would support economic growth.

Dozens of new insurers appeared, many with opaque shareholding structures. At the end of 2010, there were 126 companies licensed to conduct life and general insurance business. From 2011 to February 2017, the CIRC issued 41 new business licenses. Among the companies spawned by the liberalization were Foresea Life Insurance and Evergrande Life Insurance, which have become poster children for the industry’s troubles.

The industry’s expansion was spurred by the launch of innovative but risky products as many of the smaller, more nimble insurers fought to gain market share and boost their assets and profits. They were helped by a loosening of regulations that abolished limits on the returns they were allowed to offer policyholders.

The most prolific growth came from universal life insurance policies, short-term policies with maturities ranging from a few months to three years that came with minimal life-insurance benefits but attracted policyholders with high yields and no-penalty early cancellations. The regulator gave the products a turbo boost in 2015 by abolishing the 2.5% cap on guaranteed returns, allow insurers to offer much higher yields.

But to pay higher returns to policyholders, insurers had to invest in assets with higher risks, such as stocks and overseas property. These were less liquid and longer-term investments and left companies with liquidity risks that had the potential wipe out their capital if they were unable to raise new money to redeem maturing policies and unable to sell assets to fill the gap.

Ironically, the crackdown on the issuance and conditions of universal life policies over the past year has now precipitated the very liquidity crisis regulators were worried about. The regulator has stopped some companies, including Foresea Life from issuing new universal life policies. That’s sent their premium income crashing and left them struggling to meet redemptions without selling the underlying investments.

Life insurance premium income rose by 37.2% year on year in the first quarter to 1.32 trillion yuan, but sales of universal life policies slumped by 61.2% to just 231 billion yuan, according to CIRC data.

Foresea Life, one of the biggest players in the market, saw its premium income slump by 70% to 13.5 billion yuan in the first quarter, according to Caixin calculations based on regulatory data. A source close to the company said it swung to a net cash outflow from operating activities of 9 billion yuan from an inflow of 36.6 billion yuan a year earlier.

The company has pleaded with the regulator to lift its ban on the sale of new products. In a letter in early March and again in late April, it raised fears that the liquidity squeeze could lead to mass defaults on redemptions and to social unrest as policyholders failed to to get their money back. But so far, the CIRC has held firm.

Foresea Life’s problems have heightened concerns about the liquidity conditions of other aggressive insurers. Calculations by Caixin found that in the first quarter of 2017, 17 life insurance companies report net cash outflows, up from eight in the same period last year, indicating they paid out more than they earned in income from their insurance premiums.

Several insurers, including Anbang Life Insurance, Foresea Life and Evergrande Life Insurance, saw their comprehensive solvency ratio, a key measurement of an insurer’s ability to pay back all its liabilities, fall to close to the regulatory red line of 100% in the first quarter, according to their financial reports.

The CIRC has played down these concerns. On May 23, it said that only five out of 170 insurers that it had inspected had comprehensive solvency ratios near the red line and that the overall ratio for the industry was at 238%. It said risks in the industry were generally “controllable.”

The success of universal life insurance products left many upstart private insurers with more money than they knew what to do with. Their controlling shareholders, often hidden behind opaque ownership structures, started to use the companies as their personal ATMs to fund aggressive investments including hostile takeover bids for listed companies in concert with other investors.

The most high-profile case involved Foresea Life which was controlled by property tycoon Yao Zhenhua through his financial and real-estate conglomerate Baoneng Group. In late 2015, Baoneng started secretly buying up shares in China Vanke, one of the country’s biggest real-estate developers and subsequently launched a hostile takeover that led to a bitter months-long battle for control that sucked in other property developers and insurance companies.

Baoneng finally retreated but not before it emerged that the company had funded much of its investment in Vanke through borrowing, including the use of premium income Foresea Life had raised from selling universal life policies.

In a speech in December, Liu Shiyu, the head of the securities regulator, attacked corporate raiders as “bandits” whose actions displayed decayed humanity and ethics, although he didn’t name names.

In February this year, Yao was banned from the insurance industry for a decade after an investigation by the CIRC found that Foresea had violated the country’s insurance laws and misused insurance funds.

But some owners hide behind a complex network of affiliates and companies that obscure the ultimate controlling shareholder. Anbang Insurance Group, an acquisitive Chinese insurer which bought the Waldorf Astoria hotel in New York, appears to be evenly held by 39 shareholders, according to its business registration documents. But a Caixin investigation found that 37 of its non-state shareholders are linked to the company’s chairman Wu Xiaohui through dozens of subsidiaries and affiliated companies.

The ownership of Beijing-based Kunlun Health Insurance Co. has also come under scrutiny in the Chinese media, with reports citing business registration records as showing that at least four shareholders were linked to Guo Yingcheng, the chairman of property developer Kaisa Group, and his family, giving them control of the insurer.

Kunlun denied the reports but in late 2016 the CIRC asked the company to explain its ownership structure and asked it to submit documents by March 6. The commission has yet to make any public statement about its findings.

Several industry sources told Caixin that a lack of funding and personnel is hampering the commission’s ability to conduct investigations. Nevertheless, the CIRC is stepping up efforts to put insurance companies’ shareholders and their funding sources under closer oversight. It made an initial move at the end of 2016, issuing a draft policy with plans to reduce the cap of a single shareholder’s holding in an insurance firm from 50% to 33% to prevent absolute control.

In April, the CIRC further required insurance companies, whose majority shareholder owns over 50% stake, to adjust their voting policies to what’s known as a Cumulative Voting System, a mechanism designed to give minority shareholders greater voting power when the company’s majority stake is controlled by a single shareholder.

In a May 7 document, the regulator vowed to plug regulatory loopholes and strengthen its supervision of insurers’ ownership structure and the authenticity of their funds, and improve monitoring of their investment allocations.

In January, insurance companies were told they needed to obtain regulatory approval for equity investments and banned them from using client funds for the purpose.

In a document released on May 7, the commission again pledged more stringent supervision of insurers’ investments in highly leveraged, structured financial products and two days later ordered all insurance companies to launch internal reviews of their investment and capital flows.

Several analysts told Caixin that the tightening scrutiny of insurance products will hit many small insurers disproportionately hard as they were the ones who had relied heavily on sales of the investment-linked policies.

“The regulator is forcing insurance companies to return to traditional protection-style policies,” a source with an insurance company told Caixin. “This is bound to affect the growth of the industry but it’s too early to say just how bad it will get.”

Insurance companies are now under severe pressure as they struggle to restructure their business operations to cope with the new climate of caution another insurance executive said.

“The business model many insurance companies followed to grow rapidly was unsustainable,” he said. “The days of reckless growth are over.”