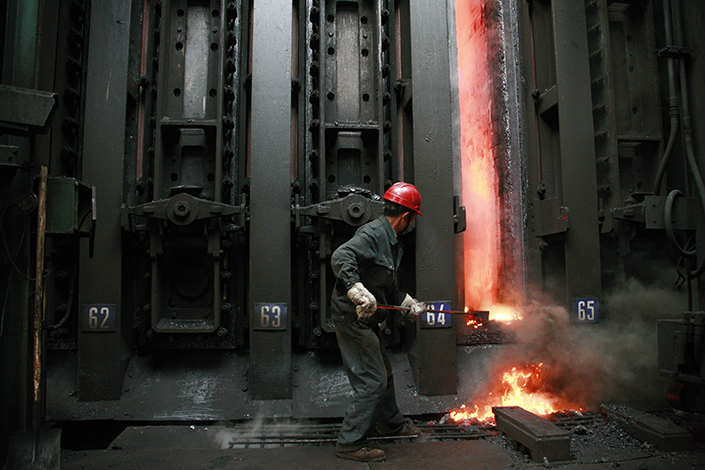 A coke oven in Huaibei, Anhui province. China’s manufacturing activity contracted for the first time in 11 months in May. Photo: Visual China

The Caixin China General Manufacturing Purchasing Managers’ Index (PMI) — closely watched by investors as one of the first available indicators every month of the strength of the Chinese economy — came in at 49.6 in May, down from 50.3 in April.

A reading above 50 indicates expansion, while a number below 50 points to contraction.

It marked the first contraction since June 2016, when the manufacturing PMI was at 48.6, according to data from the survey, which is compiled by information and data analytics provider IHS Markit. May was also the third straight month that the figure has declined.

The survey, based on figures collected from more than 500 manufacturing companies across the country, adds to signs that the Chinese economy is losing steam as effects of government policies to cool an overheated property market and rein in financial risks kick in.

“China’s manufacturing sector has come under greater pressure in May and the economy is clearly on a downward trajectory,” said Zhong Zhengsheng, director of Macroeconomic Analysis at CEBM Group, a subsidiary of Caixin Insight Group, in a statement releasing the figures.

The official PMI for the manufacturing sector, published by the National Bureau of Statistics (NBS) on Wednesday, was 51.2 in May, flat with the reading in April, which was the lowest six months.

The Caixin PMI focuses more on light industry, while heavy industry takes a larger share in the NBS survey. The geographic distributions of companies covered in the two polls are also different.

Production in the manufacturing industry rose at its slowest pace in 11 months in May as growth in total new orders declined to the weakest rate since the current upturn began in July last year. That reflected subdued demand both at home and overseas, according to the Caixin survey.

Manufacturers have turned more cautious about their business prospects and lowered purchasing activity last month for the first time since June. That led stocks of inputs to decrease at their fastest pace since January. Inventories of finished items saw their first increase this year in May, partly due to subdued sales, the Caixin poll showed.

It showed cost burdens dropped last month for the first time in nearly a year mainly on lower raw material prices. Under pressure due to a decline in market demand, manufacturing companies passed on any savings to clients by cutting their output charges for the first time since February 2016.

Workforce numbers fell at the quickest rate since September as companies continued to cut jobs, while some others were reluctant to hire to fill vacancies.

Chinese goods producers’ confidence for the rest of the year was weaker than the historical average, with the degree of optimism unchanged from April’s four-month low, the Caixin survey showed.

The manufacturing PMI figures are likely to add to concerns over a renewed slowdown in China’s expansion.

Dozens of local governments have imposed restrictions on housing purchases to curb surges in home prices, while the central bank has raised interbank rates and the country’s financial regulators have embarked on a campaign to crack down on irregularities in the sector and shadow banking industry, in part of top leaders’ call to reduce leverages in the economy and ward off risks.

As a result, key activity indicators of trade, industrial production, investment and consumption all posted softened increases in April, and a number of analysts have predicted growth in the current quarter to decelerate, snapping a rebounding streak in the January-March period and the last three months of 2016.

Gross domestic product rose by 6.9% in the first quarter year-on-year, the second-straight quarterly acceleration and above the government’s full-year target of around 6.5%.