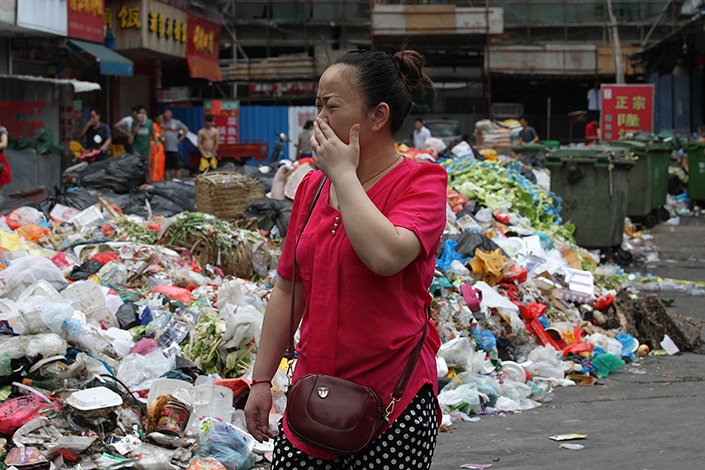 A pedestrian covers her nose when walking through a street filled with garbage in Baoan, Shenzhen, Guangdong province, on Aug. 29, 2014. Photo: Visual China

(Beijing) – The southern tech-hub of Shenzhen has become the first city in China to impose fines on businesses and individuals who fail to comply with garbage-sorting rules.

Individuals may be slapped with a 50-yuan fine each time they fail to separate kitchen waste from recyclable paper, glass, e-waste or plastic, and businesses could be fined 1,000 yuan per violation, according to a document released Saturday by the city government.

Property-management companies could face 5,000 yuan in penalties for working with unlicensed companies to collect and transport waste, the government said.

Shenzhen is covered under an ambitious national government program, announced in March, that aims to recycle by 2020 at least 35% of garbage produced in 46 major cities including provincial capitals and municipalities such as Beijing. Sorting waste is an essential first step to effective recycling.

Bigger cities in China have turned to burning garbage as they run out of space for landfills. The number of incineration plants across the country nearly doubled from 238 in 2010 to 514 in 2015, according to data from the National Development and Reform Commission (NDRC), the country’s top economic planning body. China’s incineration capacity is expected to double again by 2020 with more plants in the pipeline. The country will be able to burn 54% of its garbage, up from 31% in 2015, according to the NDRC.

The largest 246 cities in China, according to population size, generated 186 million tons of household waste in 2015, according to the Ministry of Environmental Protection. But nearly 90% of waste was left unsorted before it was transported to landfills or increasingly to incineration plants.

Burning unsorted waste will take a toll on public health, according to a study by researchers at Renmin University in Beijing. The findings published in March showed illnesses linked to incinerating unsorted garbage in Beijing could end up costing the city nearly 28 billion yuan ($4.1 billion) in medical insurance claims by 2020.