Online Banks Tied to Tencent, Alibaba Bulk Up 1 Yuan at a Time on Microloans 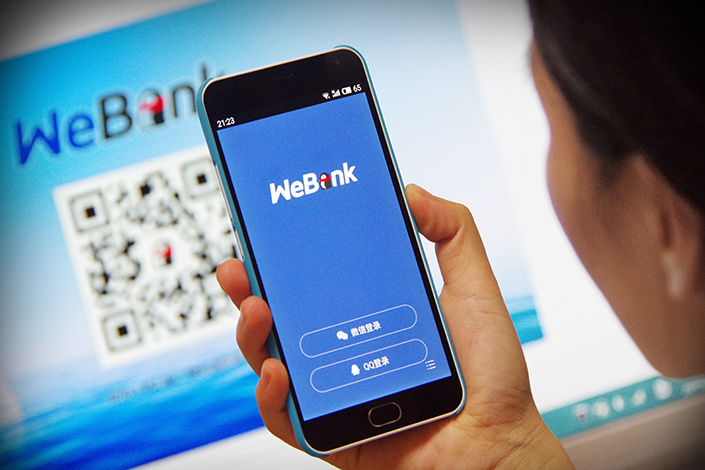 WeBank, the first of China's online-only lenders, has lent out more than 200 billion yuan ($29.4 billion) since its creation in early 2015. Photo: Visual China

(Beijing) — Two years after their launch, new online banks linked to internet titans Alibaba and Tencent have doled out more than 300 billion yuan ($44.1 billion) in their brief lifetimes by targeting millions of entrepreneurs with microscopic loans that often carry terms of just days.

Tencent Holdings Ltd. was first out of the gate when it received a license in early 2015 for WeBank, the first of a new group of online-only lenders under a Beijing pilot program to bring private money into China’s financial sector. Since that time, the bank, which is 30% owned by Tencent, has lent out more than 200 billion yuan, with an average loan size of just 8,000 yuan.

Not far behind was Ant Financial, the former financial services arm of Alibaba Group Holding Ltd., which still maintains close ties to the e-commerce giant through its core Alipay electronic payments service. Since getting its own online bank license in June 2015, Ant’s MyBank has lent out some 115 billion yuan, with loans averaging about 17,000 yuan.

WeBank and MyBank were among a small group picked for the pilot program, aimed at giving China’s small and midsize businesses better access to credit. Such businesses have been chronically underserved by traditional banks, nearly all of which are state-owned and accustomed to lending to state-run enterprises with strong government ties and access to real estate that can be used as collateral.

“WeBank and MyBank are China’s first internet banks and among the first batch of private banks. Lacking existing players in the market as benchmarks, they are already showing rapid growth that is faster than their private bank peers,” said Edward Tse, CEO of strategy consultant Gao Peng Advisory. “Even though other internet players … are joining the competition, WeBank and MyBank are still likely to maintain their leading positions” because of their connections to Tencent and Alibaba.

Both banks are rapidly carving out a niche by targeting a group that would have traditionally been served by credit card issuers in a more-mature Western market. Such cards, which typically carry high interest rates and are meant to be paid off monthly, are still a rarity in China.

Illustrating how they fill that credit card-style niche, MyBank said the average term for repayment of its loans is just seven days, even shorter than most credit cards. WeBank said its maximum interest rate is 0.05% per day, which looks tiny on a daily basis but translates to a relatively large 18% or higher when annualized. That’s also similar to Western credit cards that often promote monthly interest rates that look low but actually become similarly high when annualized.

MyBank, which has served about 5 million customers to date, pointed to one extreme case that shows how some users have become heavily reliant on the product to finance their daily operations. That case saw a merchant selling beef jerky on Alibaba’s popular Taobao marketplace take out nearly 3,800 loans over the last five years, initially using Ant’s similar Ant Micro Loan program. That translated to an average of two loans per day, ranging anywhere from just 3 yuan to up to 56,000 yuan.

“There are millions of small and micro businesses like this Taobao shop owner’s,” said a MyBank spokeswoman. “MyBank is aimed to meet their financial needs and help them to grow. And MyBank is able to do so because of our strength in data analytics and risk management technology.”

Analysts said the rapid growth of the two banks isn’t surprising, given their strong links to the internet giants and lack of financial services from traditional big state-owned banks for small- and midsize-business owners. That growth will probably continue for a while, they added.

One parallel for what to possibly expect could be Ant Financial’s Yu’e Bao, a fund popular with users of the company’s Alipay electronic payment service. The fund quickly became a hit with small investors after its 2013 launch by offering returns that were often higher than most banks. Since then it has gone on to become the world’s largest fund, with more than 1 trillion yuan under management.

But the new banks are also unlikely to challenge traditional banks in China anytime soon, said one analyst at a major Western research house, speaking on condition of anonymity due to company policy.

“The banking business is highly regulated and requires substantial capital if you want to go big,” he said. “The capital base of WeBank or MyBank simply cannot challenge existing banks unless Alibaba or Tencent plans to put huge capital into the banking business. Also, this is not a static game. Banks are all learning from these new guys in terms of improving internal procedure and implementing new technology. We believe some of the banks will do a better job.”