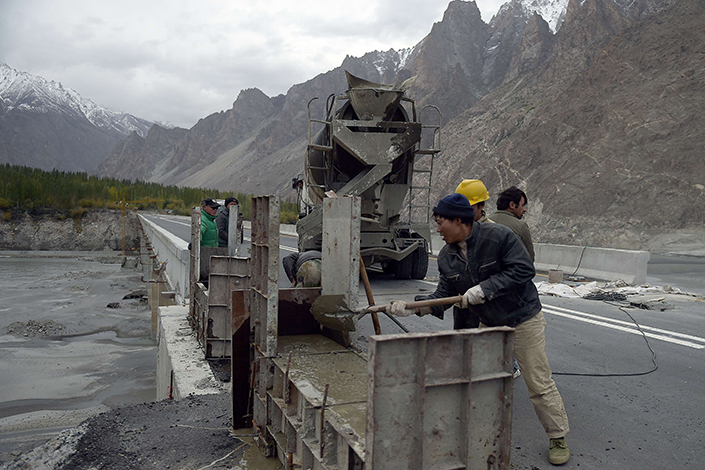 The use of the yuan could be greatly boosted in countries involved in the “Belt and Road” program, a deputy governor of China’s central bank said on Tuesday. Above, Chinese laborers work on the Karakoram Highway in Gulmit village in northern Pakistan in September 2015. Photo: Visual China

(Beijing) — The use of the yuan could be greatly boosted in countries involved in the “Belt and Road” program, a deputy governor of China’s central bank said, as Beijing presses ahead with its ambitious plans to enhance the international clout of the Chinese currency.

“The yuan is the most natural choice for participants in the Belt and Road initiative,” Yin Yong said at an investment forum on Tuesday.

While China is the biggest trading nation, the yuan’s use in the world market is limited. Currently, only 14% of all cross-border trade in goods with countries in the Belt and Road initiative was settled in yuan terms. That is much lower than the 25% share of receipts and payments using the currency, also known as the renminbi, in China’s total global goods trade, he said.

Therefore, there is a “big room to increase” the use of the yuan in partner countries, he added.

China is keen on strengthening the yuan’s role as an international reserve currency and hopes the Belt and Road initiative, which typically features state-owned Chinese banks granting massive loans for infrastructure projects contracted by Chinese firms in participating nations, to be a catalyst for this.

The push to fund the projects in yuan terms comes as Beijing is seen by analysts to be fine-tuning its so-called yuan internationalization strategy by shifting the focus from expanding the currency’s use in trade settlements to carrying out more yuan-based financing and investment overseas. Cross-border yuan settlements fell 19% year-on-year in 2016, according to financial services cooperative the Society for Worldwide Interbank Financial Telecommunication, after the currency continued to depreciate the past two years.

Belt and Road countries need China’s cash as well as its products and services, which could boost their acceptance of the yuan because paying for the purchases using the yuan saves the costs of currency exchange, Yin said in a previous interview with Caixin.

So far, 21 Belt and Road countries, or about a third of all participants in the initiative, have signed currency swap deals with China, and yuan clearinghouses have been established in six nations, he said Tuesday.

Last month, President Xi Jinping announced massive new financing plans for Belt and Road projects, including a combined 380 billion yuan ($55.9 billion) in specialized loans to be extended by two Chinese policy lenders and a cash injection of 100 billion yuan into the state-owned Silk Road Fund, which is tasked with investing in infrastructure, resources, industrial-capacity cooperation and financial projects in relevant countries.

He also said the government will support financial institutions to conduct overseas yuan fund businesses, which include yuan-denominated lending and equity investment, with the overall scale estimated to reach 300 billion yuan.

Yin said in the earlier interview that such arrangements, where the yuan’s use will be encouraged, will “reduce the reliance on currencies like the U.S. dollar and beef up confidence in the Chinese currency and enhance its attractiveness, helping to develop a yuan-denominated capital market, and lower risks linked to foreign exchange rate volatilities.”

All these could help “maintain stability in the foreign exchange and financial markets,” he added.