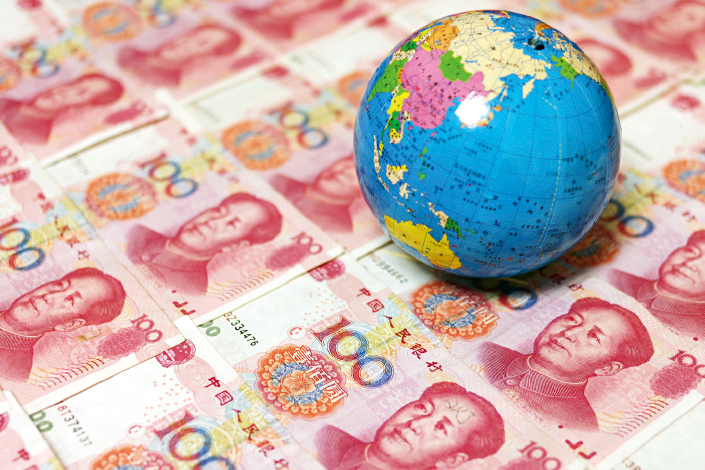 (Beijing) – China’s campaign to position the yuan front and center on the international currency stage is moving forward despite depreciation concerns and a Beijing effort to limit capital outflows.

Economists, analysts and People's Bank of China (PBOC) officials are upbeat about the current and future pace of the so-called "yuan internationalization" campaign, which began in 2009, although they also agree that it's a long-term process.

In late April, PBOC Deputy Governor Fan Yifei told an audience in Australia's financial hub Sydney that China would continue to push for the currency's internationalization, and that market forces would play a "decisive role" in the process.

Fan's comments came a few weeks after another PBOC deputy governor, Yi Gang, spoke in Beijing about staying focused while seeking steady progress for the campaign as part of a long-term government strategy.

Caixin has learned that new government policies concerning cross-border use of the yuan are expected to be announced during a Belt and Road summit scheduled for Sunday and Monday in Beijing.

Analysts said they think the government plans to fine-tune its strategy by shifting the focus from expanding the yuan's use for international trade settlements to doing more yuan-based financing and investment overseas.

At the same time, though, experts cautioned that the yuan internationalization effort will need time in light of China's current financial and economic challenges.

Yu said now is not the time to significantly adjust controls affecting capital outflows, as a recent stabilizing of the yuan against the U.S. dollar cannot be expected to last long given China's economic data for March.

An official with a government agency who asked not to be named told Caixin that authorities are keen on opening China's financial markets to foreign investors, which in turn should boost the yuan's global status.

Programs through which foreign investors can access mainland stock exchanges, such as the Shanghai-Hong Kong Stock Connect in place since late 2014, and the interbank bond market, which opened to foreigners in 2015, rely on the yuan.

China's gradual opening of its financial markets to foreign investors has been widening channels for cross-border yuan flow and encouraging investors to hold and use yuan, said Cheng Shi, chief economist at ICBC International, an investment bank linked to the Industrial and Commercial Bank of China.

And international demand for the yuan will naturally grow as China expands overseas trade and Chinese companies step up investment abroad, Cheng said.

Moreover, Yi said, policymakers plan to streamline the yuan's use in international trade and investment while continuing to build a global infrastructure for yuan internationalization.

The government's recent moves and financial developments have yielded positive results for the internationalization campaign.

But the progress follows a stalemate that began with a sudden depreciation of the yuan in August 2015.

That month, against the backdrop of PBOC's daily fixing of the yuan's value, the currency fell 4.4% against the U.S. dollar over a three-day period. The currency's devaluation continued through 2016, with the yuan shedding 6.6% of its value against the dollar that year.

Cross-border yuan settlements fell 19% year-on-year to 9.8 trillion yuan in 2016, according to the Society for Worldwide Interbank Financial Telecommunication (SWIFT), a financial services cooperative. The yuan was being used for only 1.8% of the world's cross-border payments as of late 2016, SWIFT said, ranking it behind the U.S. dollar, euro, British pound, Japanese yen and Canadian dollar.

The Chinese currency had placed fourth in August 2015, before the devaluation, with a 2.8% share, SWIFT said. And its use by Chinese companies for cross-border payments had soared for years before peaking at 27% in mid-2015.

China had lobbied for years to get the yuan into the SDR basket as part of its internationalization strategy. The effort began in 2009 after Beijing decided to reduce foreign exchange risks in the wake of the global financial crisis by allowing for the first time yuan-based, cross-border trade settlements.

The good news for yuan promoters has gotten even better in recent months.

For example, Cheng said, foreign investor holdings of yuan-denominated financial assets in China rose more than 2% every month between January and March. And the IMF said the yuan in February accounted for 1.1% of worldwide foreign exchange reserves, up from 0.7% in September.

But internationalization also faces challenges. A government effort to control an exodus of Chinese investor cash has led to tighter capital controls that made it more difficult to convert yuan into other currencies and make overseas transfers.

Among some overseas investors, interest in holding Chinese currency has waned since 2014. For example, according to the Hong Kong government, yuan-dominated bank deposits in Hong Kong--the yuan's largest non-mainland hub--slid to 511 billion yuan in late February from 1 trillion yuan in December 2014.

These and other overseas investor reaction underscore the fact that market forces are playing a large part in determining the pace of yuan internationalization, said Wu Ge, chief economist at Huarong Securities.

Government policymakers pushed hard for the currency's global acceptance between 2010 and 2015. Today, they're continuing to support internationalization through overseas trade and investment initiatives.

PBOC Governor Zhou Xiaochuan, writing in the March issue of the bank's publication China Finance, called for expanding the yuan's use for financing Belt and Road projects. The goal is to reduce foreign exchange costs for Chinese companies and fend off exchange rate fluctuation risks.

Government officials are likely to add substance to Zhou's comments with announcements about yuan-based, cross-border investments when they meet at the Belt and Road summit, sources who declined to be named told Caixin.

Ivan Chung, a senior analyst with the ratings agency Moody's Investors Service, recommends issuing more yuan-denominated loans on overseas markets as a way to promote the currency for international financing and investment. Lending yuan would encourage foreign investors to buy Chinese products and services, as well as promote Chinese overseas investing, he said.

“The next step for yuan internationalization is to shift from (its use as an) international trade settlement currency to international investment and reserves,” said Ba Shusong, chief China economist at Hong Kong Exchanges & Clearing, operator of the Hong Kong Stock Exchange.

Yu said capital controls imposed by the government in recent months are likely to be fine-tuned, rather adjusted dramatically, in the short-term. Several analysts said PBOC since March has been slightly relaxing cross-border capital transfer limits in response to an easing of capital outflows.

Yu said he's staying "positive” about internationalization but admits it is a gradual, long-term process. Moreover, he said, given China's current economic status the government should focus foremost on financial risk control rather than yuan internationalization.

Cheng also sees global adoption of the yuan as a long-range project.

“It will not happen in one or two years," he said. "The process will take 10 years or more.”