Djibouti Feasts on ‘Belt and Road’ Largesse From China 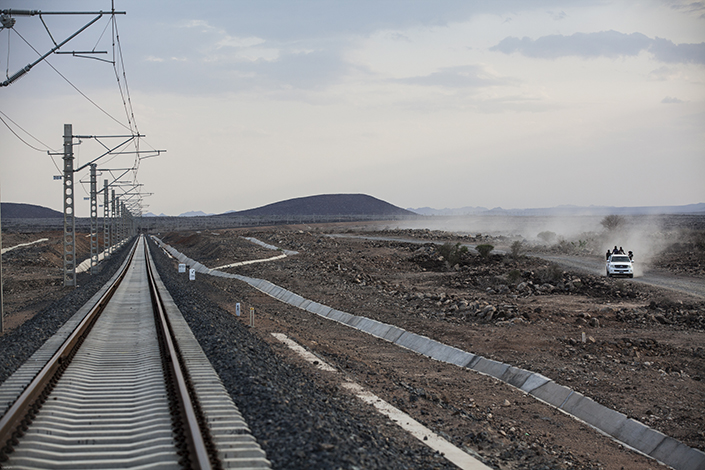 The Addis Ababa-Djibouti railway, the longest electric railway in Africa, officially opened on Oct. 5, 2016. Africa's first cross-border electric railway was built by Chinese enterprises, and the opening of the railway marks a significant milestone in the development of Ethiopia and Djibouti. Photo: IC

(Beijing) — The decaying African nation of Djibouti is getting a multibillion-dollar face-lift from half a world away, with a huge influx of “made in China” infrastructure over the last two years.

The nonstop string of major deals dovetails with Chinese President Xi Jinping’s “One Belt, One Road” initiative, which focuses on infrastructure investment in developing countries with the help of Chinese builders and financiers. But at the end of the day, the huge investment totaling more than $10 billion to date is all about money and power, as China tries to project its influence into different parts of the world and ensure its supply of natural resources, analysts say.

The former French colony lies at the strategic mouth of the Red Sea, a major shipping artery and a key reason why China chose to set up its first-ever overseas military base in the country, whose entire population totals just under 1 million.

Equally important, Djibouti is near Sudan and the new nation of South Sudan, and also borders landlocked Ethiopia. All three neighbors are rich in oil and gas resources that China is helping to exploit. Those resources remained untapped for years in part due to lack of infrastructure for shipping them to the rest of the world, including necessary pipelines and port facilities.

But the massive new spending from China has also put a big financial burden on Djibouti, whose 22,000 square kilometers makes it about two-third the size of the Netherlands.

“The recent wave of Chinese investment … in Djibouti fits the overall aim of the ‘One Belt, One Road’ initiative of the Chinese government, which is to promote the trade and business connection between China and the rest of the world,” said Eric Lin, a partner at the law firm of Simmons & Simmons, which has worked on some of the projects.

“The success of the projects will depend on Chinese investors’ abilities to turn Djibouti into a regional hub that can serve not just the small population of the country but also the rest of the region.”

The latest of Djibouti’s investments from China took to the rails in January, when the first passenger trips began on a 750-km railway connecting the port town of Djibouti City, the nation’s capital, to the Ethiopian capital of Addis Ababa. The $3.4 billion project reduced travel time between the two cities to 12 hours, down from a previous three days over the patchy regional road network.

The project, one of the largest in the recent building spree, was built by China Railway Group and China Civil Engineering Construction Corp., and was funded by the Export-Import Bank of China, with the latter two names appearing as builder and financier of multiple recent projects in the country.

China Civil Engineering Construction’s name also appears as the main builder of two new airports costing $600 million for the nation, including a smaller one that was set to open last year and a larger one slated to start service in 2018. On its eventual completion, that larger airport will be able to handle 1.5 million passengers and 100,000 tons of cargo each year.

Also active on multiple projects is the state-run transportation-focused China Merchants Group, whose construction of a major upgrade to Djibouti City’s port and an adjacent free trade zone carry a combined price tag of about $1 billion. Upon completion, the 48-square-kilometer free trade zone will be the largest in Africa, and the port would contain a liquefied natural gas (LNG) terminal.

That terminal hints at the motivation behind the largest of the works, a $4 billion project that includes plans to develop a potentially massive natural gas field in Ethiopia, and then move that through a newly constructed pipeline to Djibouti for outbound shipment to global destinations. That project is being led by China Poly Group Corp., another diversified state-owned conglomerate.

To power all the new projects, construction on a 360 million euro ($392 million), 300-megawatt solar farm also began last year, though that was being built by a German company. But one or more Chinese companies are currently negotiating for another major new plant, which could be powered by traditional fossil fuels or also a mixture that includes new energy, a source with direct knowledge of the discussions told Caixin.

While Chinese companies and banks are supplying much of the financing and know-how for the flood of new infrastructure, the building spree is also putting a huge debt burden on a tiny African nation whose entire nation’s GDP was just $1.7 billion in 2015, and per capita income was about $1,900 in 2014, according to World Bank and UN data.

As a result of the building binge, Djibouti’s debt rose to 85% of GDP at the end of last year from 50% just two years earlier, the International Monetary Fund said in a report published this year. It also noted that despite the investment and construction boom, much of it done by Chinese workers, Djibouti still has a 39% unemployment rate, and nearly two-thirds of its people are either poor or live in extreme poverty.

“Djibouti is expanding its infrastructure to leverage its strategic location and foster growth, reduce poverty, and create jobs. The remarkable investments in ports and railways — started in 2015 and mostly debt-financed by financial institutions from China — presents opportunities as well as risks,” the IMF wrote in its report. “Djibouti continues to be at high risk of debt distress, as all debt sustainability indicators are above their thresholds for a prolonged period.”

The rapid buildup by China’s economic establishment is also partly behind the nation’s other major investment in the country, its first-ever military base overseas. China confirmed the plan to build the base in 2015, with media reports saying it leased the land for 10 years at a cost of $20 million per year.

Analysts and observers said such a base is strategically located not only to protect China’s growing economic interests on the African continent, but also shipping interests in the key pirate-prone Red Sea and Suez Canal areas, one of the world’s busiest shipping lanes. Simons & Simons’ Lin also noted that if and when the regional economy starts to take off, Chinese companies and financiers could find themselves having to compete with other major global infrastructure builders.

“The Chinese investment will inevitably face competition from other investors,” he said.