Opinion: Belt and Road: A Symphony in Need of a Strong Conductor 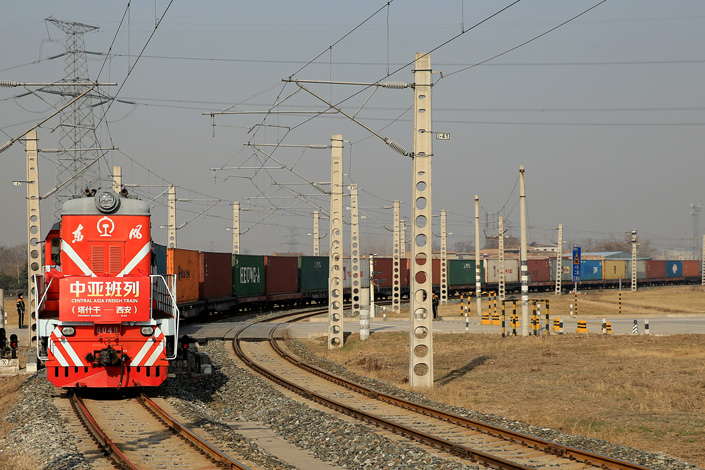 A train carrying cotton from Central Asia’s Uzbekistan arrives in a station in Northwest China’s Xi’an, Shaanxi province on Feb. 24. It was the first freight train to arrive from Uzbekistan since Xi’an started a Central Asia freight service as part of the Belt and Road program. Photo: IC

In just a few weeks, the Chinese president will host the Belt and Road summit — Xi Jinping’s landmark program to invest billions of dollars in infrastructure projects across Asia, Africa, and Europe. Reactions to the project have been, understandably, mixed.

The vision of the “One Belt, One Road” initiative is essentially about connectivity —facilitated by infrastructure. Many developing countries urgently need investment in roads, railroads, power plants and grids, airports and ports. But to make physical connectivity work, policy coordination and regulatory harmonization also need to follow suit. In the end, the initiative is about global cooperation and integration.

But investing in infrastructure is difficult. It requires a large amount of funding, and carries non-trivial political, sovereign and financial risk. Gestation and construction periods are long, and private investors may have neither the willingness nor capacity to hold illiquid assets for a long period of time. Political leaders may change regulatory policies to pursue a political agenda, such as reducing road tolls or power or water tariffs to buy election votes, or shutting down facilities outright. An otherwise good project could be loss-making.

In developing countries with weak institutional capabilities, protracted delays in implementation can be the exception rather the rule. In many instances, the cost of funding is less of a problem than the cost overrun from overdue completion.

Many countries are also grappling with public debt, finding it more and more difficult to borrow from multilateral development institutions as they hit the debt ceiling. With limited fiscal space, governments would need to resort to levying taxes, which are always politically difficult. They also crowd out other types of investment — such as education, health or environmental protection. Governments elected for a single term are not incentivized to raise taxes for big projects, unless they can be translated into actual votes.

At a time when a large funding gap in world infrastructure impedes economic progress, when expansionary fiscal policy is particularly potent in creating jobs and stimulating the economy — someone has to take the lead. The objective is clear: The world needs to de-politicize infrastructure decisions, and create a dedicated international pool of long-term capital that is not dependent on taxes, or yearly appropriations of funds.

But why is China taking the lead? How could China convince the rest of the world that this is intended to be win-win, to bring benefit to the global community?

China is acutely aware of the urgency of infrastructure development in many low-income emerging market economies. The idea of connectivity initially emerged from cooperating with Association of Southeast Asian Nations (ASEAN) countries. It then quickly became apparent that connectivity among Asian countries was not enough to achieve better economic results. If expected to play its maximum role, infrastructure needs to straddle vast territorial boundaries.

Ahead of the Belt and Road summit, some clarifications are in order. China is, first of all, not shy of proposing ideas, and then opening it for debate and discussion. Second, China needs to stress the participatory approach in implementing the Belt and Road program. It has no geographical restrictions. It is inclusive, and global integration is what it is all about. Third, it is not about replacing the role of a dominant superpower. The sequence of events reveals that China first proposed the program under the Obama administration, long before Donald Trump was elected. It is unlikely that its intention was to fill in the gap of a superpower as it recedes from the world stage. It is just that somebody has to do the job.

And America is not doing the job, even in the case of its own infrastructure upgrade. Americans are stuck — with congestion, crumbling bridges and dilapidated roads. Bipartisan debates on how to spend taxes, and a lack of leadership, are reasons that the richest country’s infrastructure is lagging behind. They have let politics get in the way.

Thus, China emerges as an obvious candidate — with capital, experience, and a vision for global integration. As Jeff Sachs writes, “China has proved itself highly effective at building large and complex infrastructure (such as ports, railways, fiber-optic cables, and highways) that complements industrial capital, and this infrastructure has in turn attracted foreign private-sector capital and technology.’’

And yet, the world feels uneasy about Chinese leadership and Chinese money. China’s rise has created a new ideological divide — that of a pro-China camp and an anti-China camp — across nations, political parties, and individuals. As China extends its antenna to many parts of the world, through investment and trade, it is by default reducing the relative influence of the up until now dominant power.

Some people cite historical incidences to put the world on warning: a rising power will try to challenge an established power. But many ignore the rest of the story behind the “Thucydides trap.” Athens did beat Sparta, but eventually suffered heavy losses. Both paid a heavy price for the conflict.

But as one Ugandan proverb puts it, “When elephants fight, it is the grass that suffers.” And one might add that the elephants would, too.

Sri Lanka is a case in point. It had, until recently, sought after and welcomed infrastructure investment from China. When China became a political tool used among contesting parties, sentiment toward Chinese involvement turned from appreciation to indignation. The politicians ran into the warm embrace of the U.S. and India, and accepted their promised financial support — only to find that the money never came. Today, they have little choice but to rekindle affections with China. China could invest billions of dollars in the next few years, and create 100,000 jobs.

Thus, it seems that the greatest barrier to pushing along and realizing the Belt and Road vision is politics, and ideology. But the perception of ideological differences between China and the rest of the world is misguided. Of course, it is pleasing to hear that Western democracies are the ones that thrive, and that authoritarian or collective leaderships (a more accurate description of China) will invariably extract and finally, fail. Time and history has proven again that this is not always the case. In fact, centralized governments have propelled and hastened economic growth. In implementing a vast area of infrastructure, strong leadership in the world economy is required.

Anything that China proposes or does is susceptible to the interpretation of harboring a political agenda. But the same could be said of the Western powers, even in cases where the guiding principle of their interventions was truly a moral and principled one. But putting aside whether there is a political agenda or not — the debate could go on and never reach a definitive answer — the right question to ask is whether there is a clear economic case to be made. Is there a significant benefit, and will that benefit be shared among many?

The U.S.-lead Marshall plan to rebuild Western Europe, lift trade barriers and to modernize industry had much of the same flavor — even though it was directly aimed against the Soviet Union, and to prevent the spread of communism. And yet the initiative was met with little resistance and controversy.

There are things that China could have done better. It could have run a better campaign to help advance the economic case. Economic strategy and skillful diplomacy would have to a great extent alleviated concerns about the initiative. Sometimes, China’s lack of understanding and appreciation of local customs and culture created barriers and tension with the local people. Some Chinese companies’ behavior has been a cause of concern. Less than adequate attention to environmental protection and sustainability, and to the interests of local communities, has been a convenient excuse for some people to criticize China’s Belt and Road initiative.

It is comforting to see that the Chinese government is fixing the problems, and the Chinese companies investing overseas, whether state-owned enterprises (SOEs) or private firms, have demonstrated their commitment to doing a better job. All of this is encouraging. China’s values and principles, deeply rooted in its long history, are not impossible to appreciate. And the country’s development model is at least a source of inspiration, if not a model to copy. China’s initiative represents its intention to do something for the world. It is unfair not to give China a chance.

And there are practical challenges. Partnership is the best approach to a win-win outcome. But how can China ensure that a platform where many governments, companies, and institutions join hands, works effectively? The lack of a designated institution to act as the main coordinator may become a challenge when so many parties and projects are involved.

In the end, we cannot let politics get in the way of a truly global, economically sensible, 21st-century initiative. The Belt and Road project is like an orchestra. It needs a conductor and it casts its players around the world. Who becomes the conductor and who is picked as the first-violinist is of course important. But more crucial is that it plays — and performs.