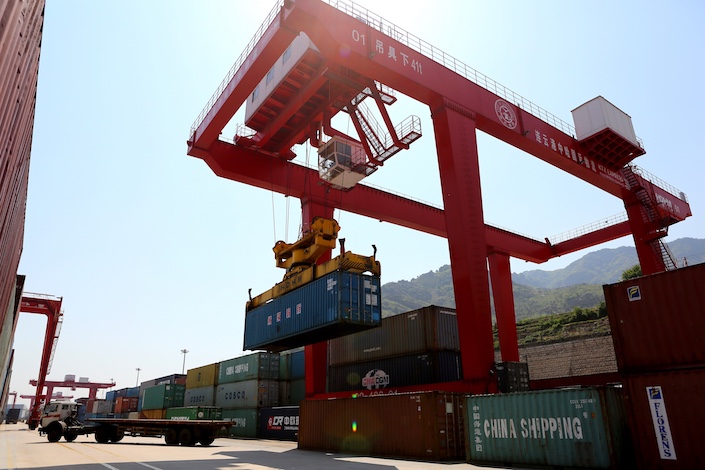 A container storage yard at a logistic park in Lianyungang, Jiangsu province on April 27. The park was jointly built by China and Kazakhstan in 2014 to serve freight trains from Lianyungang to the Central Asian country. Photo: Visual China

(Beijing) — With a large portion of initial Belt and Road projects focusing on infrastructure projects such as highways, railways, and ports, state-owned enterprises (SOEs) have been playing a leading role in the first phase of the program’s overseas expansion.

About 50 Chinese state-owned corporate giants have invested or participated in nearly 1,700 projects in countries along the new Silk Road routes over the past three years, the Chinese government said Monday, just days before a major summit on the initiative opens in Beijing.

China on Sunday is set to host a two-day summit on the “One Belt, One Road” initiative, a program initiated by President Xi Jinping in 2013 that aims to better connect trade paths across central Asia and Europe by land, and sea routes across Southeast Asia and Africa.

Xi will attend the opening ceremony on Sunday and chair the leaders’ roundtable on Monday, according to China’s Foreign Ministry. A high-level conference will also take place on Sunday.

Xiao Yaqing, head of the State-Owned Assets Supervision and Administration Commission (SASAC), said on Monday that SOEs have been building high-speed highways in many countries, such as the 750-km lines linking the Ethiopian capital of Addis Ababa with Djibouti, and the 480-km Mombasa–Nairobi railway in Kenya.

SOEs are also pushing ahead with railways from China to Laos, and China to Thailand, Xiao said.

Chinese companies have also been building more than 60 energy projects in more than 20 countries along the Belt and Road routes, Xiao said, including oil and gas pipelines from Russia, Kazakhstan and Myanmar to China.

China has also been helping other countries build industrial parks, where Chinese companies enter a market in groups to engage in manufacturing or trade. The Ministry of Commerce said in April that China has been building 56 such parks, with more than 1,000 companies having already moved in to do business.

Foreign Minister Wang Yi said on April 18 that documents will be issued at the leaders’ roundtable summit to further identify goals and principles for cooperation, and specify cooperation measures.

It is expected that China will negotiate and sign cooperation agreements with nearly 20 countries and over 20 international organizations, he said.

Although some media reports said there are about 65 countries designated as “countries along the Belt and Road routes,” the Chinese government has not confirmed the numbers, saying the program is not an exclusive member’s club.

When asked during a press conference on April 18 how many countries were included in the Belt and Road program, Foreign Minister Wang said China “has no intention of designating clear geographic boundaries for the Belt and Road.”

“It is an initiative for international cooperation in its essence, and should be open to all like-minded countries and regions,” Wang said. “The initiative is not a member’s club, but a circle of friends with extensive participation.”

During his visit to the U.S. in April to meet his U.S. counterpart Donald Trump, Xi said China would welcome the U.S. to join the Belt and Road cooperation framework.