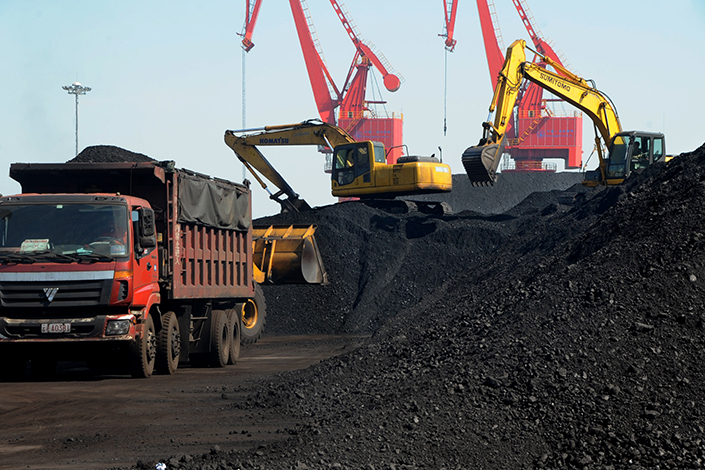 Increases in China’s producer prices weakened for the third straight month in May. Above, a truck transports imported coal at the port in Lianyungang, Jiangsu province, in May 2014. Photo: IC

(Beijing) — Increases in China’s producer prices weakened for the third straight month in May, government data showed Friday, boding ill for corporate profit prospects and signaling weakness in domestic demand that could drag on global recovery.

Meanwhile, consumer inflation hit the highest level in four months. But the increases were mild and mainly due to relatively low figures last year rather than current demand, according to figures published by the National Bureau of Statistics (NBS).

The inflation data reflected cooling activity at home, which cast a pall on the strength in the global recovery because China’s appetite for minerals and energy such as iron ore, coal and oil affects supplies across the world.

“This round of reflation in the world was largely bolstered by demand from China’s property market and the country’s supply-side reforms,” Larry Hu, an analyst with Macquarie Capital Ltd. in Hong Kong, told Caixin.

“Given China’s downturn trend, I’d rather be conservative now about the recovery in the global economy, particularly in the emerging markets,” he said.

The producer price index (PPI), a gauge of prices at the factory before other charges are later added on, rose 5.5% last month from a year ago, down from 6.4% in April, NBS data showed. It was the third month in a row that the PPI fell after peaking at 7.8% in February.

The reading also missed a median estimate of an increase of 6.7% in a Caixin poll of 10 economists.

The consumer price index (CPI), which measures prices of a basket of consumer goods and services, gained 1.5% year-on-year in May. That was the strongest since January’s increase of 2.5%, according to the NBS. It was in line with a median forecast for a 1.5% gain in the Caixin survey.

The strengthening was supported by increases in service prices, such as health care, education and transportation, as food prices actually declined by 1.6%, according to the NBS.

However, the CPI remains well below the government’s annual inflation target of a hike of around 3.0%, and only 0.5 percentage point of the May increase came from new price increases. Month-on-month, the CPI lost 0.1% last month.

Zhou Hao, an economist with Commerzbank AG in Singapore, said that the CPI and PPI readings suggested that the latest round of commodity price jumps linked to the government’s campaign to cut excess steel and coal capacity has “come to an end.”

“The CPI has been low for a long time, which painted a true picture for fundamentals in the economy — demand is not as strong as expected and there is not a reflation issue,” he told Caixin.

He predicted that the PPI is expected to fall below 1.0% by the end of this year.

China’s PPI returned to positive territory only in September after a 54-month losing streak. The rebound has been underpinned by a recovery in prices of commodities that include crude oil, coal, iron ore and heavy-industry goods such as steel and chemicals and gave debt-laden Chinese companies, particularly those in the upper stream, brief relief by boosting their profits.

But drops in the indicator now have raised the likelihood that Chinese companies will see their profits trend down in the second half of this year in general, said Hu of Macquarie Capital.

That will add pressure on the country’s economic growth and distract policymakers from their current crackdown on credit risks in the financial sector, he said.

“If the PPI continues to weaken, the central bank will be forced to, say, in three months’ time, pivot its policy focus toward maintaining growth from deleveraging the financial system,” he told Caixin.

The government has set its growth target for this year at about 6.5%.

The easing of the PPI increase last month was led by a dive of 16 percentage points in price gains in the crude and natural gas extraction sector and a 4.6-percentage-point drop in price increases of the manufacturing and processing of ferrous metals, such as steel, according to NBS analyst Sheng Guoqing.

“The previous PPI increases were driven by bubble building in the commodity and property markets,” said Zhou of Commerzbank AG. “The bubbles are now being pricked, and so PPI comes down.”

Friday’s inflation data added to evidence that China’s economic growth is cooling after rebounding for the last two quarters. Expansion reached 6.9% in the first three months of the year, and most analysts have expected it to trend down in the rest of the year.

The country’s manufacturing activity contracted for the first time in 11 months in May, an industry survey sponsored by Caixin found, while the official manufacturing purchasing managers’ index stayed in line with April’s six-month low last month.

Exports and imports both posted better-than-expected growth last month, but the performance was supported by solid overseas demand, particularly from the U.S. and the EU, rather than domestic consumption needs.

The NBS is scheduled to release May data for industrial output, fixed-asset investment and retail sales on Wednesday.