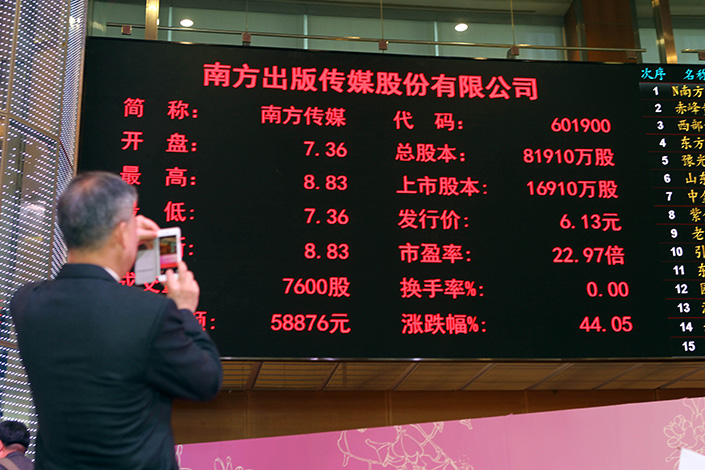 (Beijing) — Xu Xiang, once a highflying Chinese hedge-fund guru, is now behind bars for engineering block trades and private placements at fake prices in collusion with large shareholders and company executives.

Cracking down on unscrupulous investors is high on the agenda of the China Securities Regulatory Commission (CSRC). More-effective stock-market regulation is one of the criteria for China to be included in global benchmark stock indexes such as the MSCI.

Unlike Xu, many market participants remain within the confines of the legal system while trying to maximize their gains. Legal yet unchecked dumping of shares in bulk was seen amplifying market volatility and causing panic during the stock-market rout in the summer of 2015at the expense of small and retail shareholders, the CSRC has said.

However, some market participants rebuked the plan, saying such limits effectively reduce their incentives as well as ability to trade. This will lead to even lower trading activity while market liquidity dries up.

The regulator’s first version of share-dumping rules came into effect in January 2016. Shareholders who own at least 5% of a company, as well as company directors and senior managers, are not allowed to sell more than 1% of the company’s total shares within a three-month period.

Then, a couple of weeks ago, on the eve of the Dragon Boat Festival in late May, the CSRC surprised the market by expanding the rules to include new limits on share sale through block trades and private placements — popular ways to sell shares in bulk. The new rules also cover investors who own shares before the stock starts trading, commonly called pre-IPO shares.

It’s been a year and a half now, and the Chinese securities regulator is still plugging the holes in its policy that curbs share-dumping.

Why block trades this time?

The 2016 rules laid out limits only on direct-share sales in the open market. Sales that go through third parties, such as block trades and private placements, were not included.

During the first five months of this year, four out of every five block trades were initiated by the “sell” side, according to data compiled by Wang Hanfeng, a strategist analyst at China International Capital Corp.

The latest share-dumping rule added that investors are not allowed to sell more than half of their holdings in the open market within a year after the lockup period expires.

Private placements have been one of the regulator’s targets in cleaning up the stock market. In December, it clamped down on deals in which companies were favoring select investors with lower prices. Earlier this year, it put further limits on the size and frequency of funds raised from private placements. Securities underwriters also told Caixin that regulators slowed the approval of new private placements in favor of more IPOs last year.

Last year, Chinese companies raised 1.7 trillion yuan through onshore private placements, according to Bank of America Merrill Lynch. That amount even shadowed IPOs, which raised only 150 billion yuan in the same period.

Why pre-IPO investors this time?

The new rules also extend their reach to private equity and venture capital funds that buy into a company’s shares before they are publicly traded. These investors will be subjected to the same set of limits as big shareholders and company executives.

Gao Lisong, a product development specialist at securities brokerage firm Huatai Securities, told Caixin that pre-IPO and private-placement investors may spread out their investments among more newly listed companies, which could make their exit easier amid tighter rules.

The new measures may bring down the valuation of some stocks, probably to more-rational levels, as it becomes difficult to dispose of shares in the secondary market, said Song Weiming, deputy CEO of Beijing-based asset management firm Zhongtou Lianying.