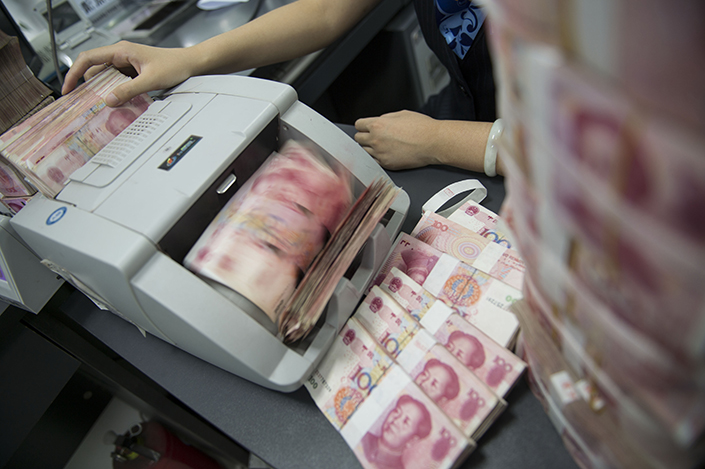 The People’s Bank of China said the country’s broader money supply, or M2, grew at a record-low pace of 9.6% in May from a year ago, suggesting that government efforts to cut leverage are paying off. Photo: Visual China

(Beijing) — This might be another sign that shows China has made progress in cutting leverage in its bloated financial system.

On Wednesday, the People’s Bank of China said the country’s broader money supply, or M2, grew at a record-low pace of 9.6% in May from a year ago. The metric was hovering above 10.5% for most of the past year.

M2 refers to cash and checking deposits — the so-called M1 — plus assets such as money market securities and mutual funds that can be converted quickly into cash.

Going forward, a relatively subdued growth of China’s M2 is set to be a “new normal,” the central bank added.

Regulators in China have been trying to mop up the excesses within the financial system, which is sitting on a massive debt pile — as well as default risks — after years of credit-fueled economic growth.

In May, new credit — including vanilla bank loans, bond and equity issuance, and trust and entrusted loans — also shrank to 1.06 trillion yuan ($156 billion) from 1.39 trillion yuan in April. May was the second consecutive month of decline.

“Under a prudent and neutral monetary policy and tighter regulations, financial institutions have adjusted their businesses, and leverage has been trimmed,” the central bank said Wednesday.

Since March, banking regulators have been rolling out sweeping regulations to unwind a steroid-infused system and to keep systemic risks from ballooning further. Measures include a tighter oversight of high-yield wealth management products that banks sell to each other, a practice that led to surging leverage in the interbank system.

Funds raised outside the formal banking system have dropped sharply, central bank data show. In May, net funds raised in the shadow-banking system — through trust loans, entrusted loans and undiscounted bankers’ acceptances — stood at 28.9 billion yuan. It was a fraction of the 1.2 trillion yuan recorded in January.

From off- to on-balance sheet

Another sign that deleveraging is gaining traction: Chinese banks have been expanding their balance sheet while shrinking off-balance-sheet assets.

In May, as funds raised through shadow-banking system fell, new yuan loans that banks made to producers of goods and services, which the central bank calls “the real economy,” rose to 1.18 trillion yuan from 1.08 trillion yuan in the previous month.

“The stronger-than-expected loan expansion on banks’ balance sheets was probably a result of China’s deleveraging efforts to curb shadow-banking activities outside the balance sheet. It could nudge loan demand to conventional bank lending,” OCBC Bank wrote in a research note.

Despite the regulator’s efforts, however, growth of wealth management products has slowed but not stopped.

Nevertheless, M2 is an important economic indicator. Because it shows how much cash and near-cash assets are readily available within the banking system, it is a useful indicator of inflation.

However, M2 does not capture assets outside the system, which are the culprits of China’s current debt problems.

The central bank admitted that M2 is becoming less of an accurate economic indicator as it does not include fast-growing wealth management products that banks sell to each other and to their own clients. Banks do so to fetch yields that are larger than vanilla bank deposits.

“Factors affecting money supply are so complex, especially when there are so many financial innovations,” it said.

According to a research note by China International Capital Corp. on Thursday, “The fast growth of wealth management products, interbank assets, money market funds and so on have all contributed to the growing divergence between M2 and total (and actual) liability growth for banks.”

The road to unwind risks outside the formal banking system is going to be long and probably bumpy, experts said.

Liu Dongliang, senior asset-management analyst at China Merchants Bank, said regulations are unlikely to be relaxed soon despite the progress. “A hard-line policy to cut leverage will continue,” Liu said.