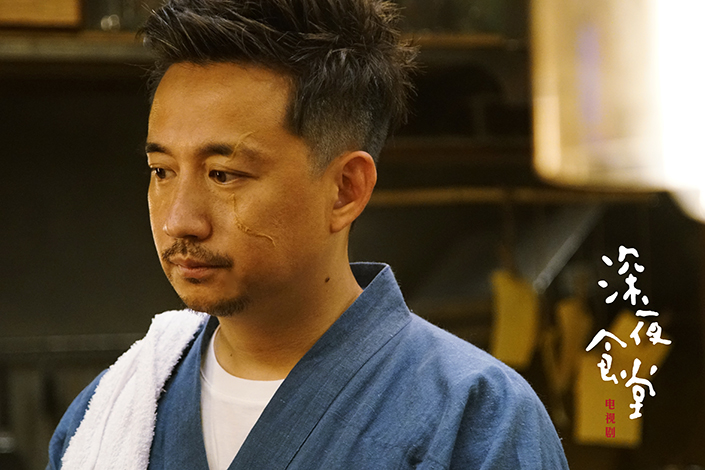 The Chinese remake of the popular Japanese TV series "Midnight Diner" is being widely criticized as both bland and unpalatable by viewers who are fans of the original version. Above, actor Huang Lei, who plays the restaurant owner in the remake, poses in a publicity shot for the series. Photo: Visual China

(Beijing) — Adapted from a widely acclaimed Japanese series of tales about a late-night snack bar and its offbeat patrons, the Chinese version of Midnight Diner is being widely criticized by viewers as both bland and unpalatable.

Appalled at its failure to weave traces of actual Chinese life into the 40-episode TV series now airing nationwide, Chinese audiences feel detached and perplexed watching the story they had grown so fond of in its native Japanese.

The Chinese remake of Midnight Diner, or Shinya Shokudo in Japanese – a four-season drama about a homey eatery and the life-size troubles of its regulars – has been slapped with a score of 2 out of 10 on Douban, China’s leading film-review site, an uncommonly low mark. This is a humiliating contrast to the rave reviews for the original, rated 9 on Douban.

Audiences have rejected the mimicking of the Japanese production, down to the characters’ attire, their dishes of choice, the kitchen bar – a restaurant layout common in Japan but seldom seen in China – and criticized the overall irrelevance of the people and setting to Chinese lives.

“What a disgraceful flop,” said viewer Chen Xiaofeng on Douban. “A midnight diner in China is nowhere like this.”

Chen added, “In reality, the owner would be a rugged guy from northeast, barbecuing leeks and pig kidneys. His clients would be a bunch of entrepreneurs dreaming up the next fundraising round, and retired old men lecturing on China’s military sway, while ‘aunties’ rancorously complain about their daughters-in-law.”

Audience criticisms are being echoed by the television industry itself, members of which say that even “chicken soup for the soul” stories can suffer from “culture shock.”

“It seems the producers were not diligent enough in devising ‘moderations’ for Chinese audiences,” a person familiar with cross-border film and TV adaptations told Caixin.

The industry source said that usually rights purchasers are given a fair degree of freedom in adaptations and are not retrained in details such as the main actor’s Japanese-style robe, which puts him embarrassingly out of place. “If they were restricted from straying from the Japanese version, it would’ve been a bad idea to buy the rights from the start.”

Midnight Diner, whose Chinese adaptation rights were acquired by state-controlled TV and film producer HLBN, has also nauseated viewers with its flagrant product placements, most notoriously plugging cooking oil and online real-estate platform Anjuke – where a character is a “hard-working employee” – and a brand of instant noodles, which the restaurant owner goes to lengths to hawk as a delicacy.

As a nation with diverse cuisines and high gastronomic standards, Chinese have also taken issue with foods that do not get typical Chinese mouths watering, such as octopus sausage, rolled omelettes, and rice topped with smoked salmon. In China, favorite night fares might include spicy crayfish, lamb kabobs, grilled fish and cold noodles.

“The ads are about as localized as this series gets,” says a user on Weibo.

“No one goes out to eat instant noodles for a midnight snack. What an insult to the boundless selection of barbecues and stir-fries,” he remarked.