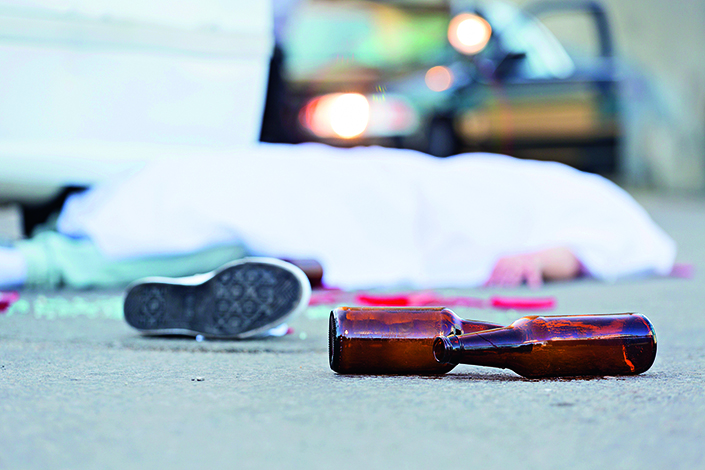 A decision by the Supreme People's Court to ease its grip on drunken drivers by introducing exceptions that could allow some to get off the hook without criminal charges has breathed new life into an old debate on which driving behavior constitutes a crime. Photo: Visual China

A decision by China’s top court to ease its grip on drunken drivers by introducing exceptions that could allow some to get off the hook without criminal charges has breathed new life into an old debate on which driving behavior constitutes a crime.

The move by the Supreme People’s Court comes as courts are inundated with cases, the result of driving under the influence of alcohol being made a criminal offense in 2011.

The current law says driving with a blood alcohol content (BAC) of above 80 milligrams (mg) per 100 milliliters (ml) could be punished with detention and/or a fine, and the law doesn’t include any exceptions or special circumstances. Regional courts had complained for years that this approach had turned China’s drunken driving law into a clumsily wielded blunt tool, diverting precious court resources toward trivial offenses.

In a sentencing guidance document released May 1, the top court recommended that judges handling drunken driving cases consider factors such as the type of vehicle driven, the harm caused, and whether the defendant showed any remorse, when deciding on the punishment in addition to examining the level of intoxication. But it didn’t offer any details on what level of harm would qualify an offender for a more-lenient sentence that includes only probation without prison time or fines.

The document — leaked on Chinese social media and later verified by sources close to the Supreme People’s Court — caused an instant public uproar. Some commentators worried the new guidance could result in selective enforcement of the law and create “back doors” for powerful defendants to escape conviction.

But researchers and lawyers told Caixin that the guidelines will apply only to special circumstances such as medical emergencies or when moving vehicles over short distances, and will not have a “substantial impact” on how drunken driving cases are handled in court.

The debate in China over how drunken driving cases should be prosecuted is older than the laws that criminalized it.

In the early 2000s, as China’s automobile ownership grew, incidents of driving while intoxicated became a major concern in cities across the country. Between 2006 and 2010, over 3,500 people died each year in China due to drunken-driving-related accidents, and more than 9,000 people were injured annually, according to figures from the Ministry of Public Security.

A spate of high-profile accidents in 2009 — including a case in Chengdu, where for the first time a drunken driver in China was given the death sentence, after killing four people — pushed policymakers to take a tougher stance. The following year, Men Jianzhu, the minister of public security at the time, suggested to the Standing Committee of the National People’s Congress, China’s legislature, that traffic offenses that included drunken driving and illegal racing should be added to the country’s Criminal Code.

When the National People’s Congress debated the first bill of the new drunken driving law in August that year, Congress members found it hard to agree on whether cases with special circumstances should be exempt from prosecution or punishment.

Li Lianning, a member of the NPC at the time, argued that special circumstances should be considered to avoid casting too wide a net. Ren Maodong, another member, opposed that, saying if drunken driving was considered only a criminal offense under serious circumstances, it would give too much latitude to the judge’s discretion.

Ultimately, the bill was passed with phrasing that didn’t allow for exceptions.

The source of confusion was another clause in China’s Criminal Code — Article 13, which says some cases that involve “minor circumstances” and negligible harm do not have to be treated as criminal offenses.

Soon after drunken driving was criminalized, the Supreme People’s Court issued an internal document that instructed against treating all instances of driving while intoxicated uniformly, suggesting that Article 13 applied to the drunken driving law. But the court’s statement was followed by statements to the contrary from the Ministry of Public Security and Supreme People’s Procuratorate.

As long as the facts are clear and the evidence is sufficient, all cases of drunken driving shall be prosecuted, the procuratorate’s statement said.

While the legal debate on whether there are any exceptions to the drunken driving law remains unresolved, it’s clear that law has been “enthusiastically enforced.”

As of late April 2016, the total number of drunken driving cases detected by police officers since May 2011 was over 2.4 million, according to figures from the Ministry of Public Security.

But while the police have had no difficulty nabbing offenders, courts are struggling to cope with the deluge of drunken driving cases that has landed in their laps.

In Zhejiang province, for instance, the number of dangerous-driving cases received by the province’s courts rose 58.72% year-on-year in 2013, according to a report by Zhejiang’s judiciary body that year. This meant that dangerous-driving offenses became the largest group of cases tried by the court after theft. The report blamed “mechanical enforcement” of the law for this high proportion, citing a few cases where law enforcement officers had been overzealous.

In one case, the defendant was drinking at a karaoke lounge when the traffic police called and asked him to move his illegally parked car. While writing a ticket, the officer smelled alcohol on the defendant’s breath and decided to test his blood alcohol content. The test showed that the defendant had a BAC of 176 mg per 100 ml, more than double the legal limit of 80 mg per 100 ml.

The defendant was later sentenced to one month in jail and fined 2,000 yuan ($294) — for obeying police instructions to move his car.

Zhejiang isn’t the only province grappling with huge numbers of seemingly trivial cases.

A report by Jiangsu province’s judiciary bodies, published alongside the Zhejiang findings, complained that “criminalization of drunken driving has resulted in Jiangsu province, which has fewer than 80 million inhabitants, producing 10,000 criminals a year.”

“Criminalizing drunken driving to protect public health and safety has its positive effects, but because of this, it creates a huge population of criminals. It is worth considering whether it is conducive to long-term social stability, and whether it reflects the educational and reformative functions of criminal law,” the report said.

Courts across the country have been inconsistent on how they handle drunken driving cases.

In the year after drunken driving became a crime, judges in some provinces, including Guangdong and Anhui, handed out more-lenient probation-only sentences more frequently, in more than 40% of cases, according to the state-run People’s Political Consultative Daily. In other provinces, like Zhejiang and Jiangsu, however, the rate was as low as 11.9%.

One major concern about the Supreme People’s Court’s latest guidance on drunken driving is that it could help officials and civil servants escape conviction.

China’s current discipline code for civil servants, which dates from 2007, says any civil servant found guilty of a crime must be immediately dismissed, so civil servants caught driving under the influence have a greater incentive than ordinary citizens to avoid conviction.

Li Mingjie, director at the Zhejiang Haizhou Law Firm, told Caixin that 8 or 9 out of 10 drunken driving cases he has represented so far have been civil servants. Many lawyers in Zhejiang have also had their licenses revoked due to drunken driving convictions, Li also said.

“What are the standards that determine whether a drunken driving case involves minor consequences and will be exempt from conviction or punishment? Will this be decided by the law enforcement officers themselves? This clearly creates the possibility of a ‘back door,’ ” online commenters wrote.

Ruan Qilin, a professor at the China University of Political Science and Law, echoed the commenters, saying, “How will courts determine if the circumstances are not serious, and the harm caused is minimal? This requires some specific standards,” Ruan told Caixin. The public will worry that allowing for exceptions could lead to “breaches of justice,” he said.

Additionally, since “drunken driving is considered a minor offense, if light or no penalty is dealt out in many cases, it will weaken the deterrent effect of the criminal code,” the head of Beijing Normal University’s law faculty, Zhao Bingzhi, said.

But Ruan cautioned against exaggerating the possible consequences of the Supreme People’s Court’s latest guidance. “Deciding not to convict requires concrete criteria. If there are no operational criteria the guidance may not have significant impact,” professor Ruan Qilin of the China University of Political Science and Law said.