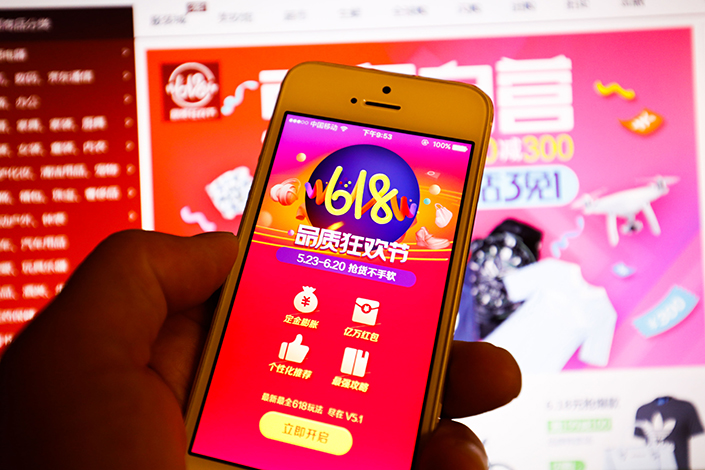 JD.com Inc.’s fortnight-long summer shopping season, which takes place to celebrate the company’s anniversary on June 18, made a record $17.6 billion in sales during the first 18 days of the month, an increase of over 50% from the previous year. Photo: IC

JD.com Inc.’s fortnight-long summer shopping season, which takes place to celebrate the company’s anniversary on June 18, made a record $17.6 billion in sales during the first 18 days of the month, an increase of over 50% from the previous year, the company announced.

The craze nearly matched Alibaba Group Holding Ltd.’s “Double 11” festival, which takes place on Nov. 11. Double 11 is considered China’s equivalent of the Black Friday shopping event in the U.S., which takes place the day after Thanksgiving — the fourth Thursday in November. The e-commerce giant made a record $18 billion in sales during last year’s Double 11 event.

With both shopping festivals making the headlines, China’s top two e-commerce firms also take part in each other’s events in a bid to steal their rival’s thunder. The apparel division of Alibaba’s Tmall.com saw its sales exceed 1 billion yuan ($147 million) in just the first 10 minutes of trade on Sunday.

To further woo consumers, Tmall.com even agreed to compensate for any difference in the price of home appliances if a product appeared more expensive on Tmall.com than on JD.com.

“We obey principles in sales promotion, as we have partnered with suppliers when preparing for the event,” said a JD.com executive at a press conference on Sunday, “but the rival’s (Tmall.com’s) strategy is just to target JD.”

With JD.com better known for its sales of electronics, and Tmall.com more famous for bargains, both rivals have been making progress in rebranding themselves.

This year, JD.com saw categories that are traditionally bought by women gain strong traction, including fashion, luxury products and maternal products, the company said without citing data. It added that the number of female first-time customers during this year’s event was nearly double the number of new female customers last year. JD.com said it has also upgraded its courier services by launching drones, driverless cars and robots to deliver goods in some cities.

In order to offer a better shopping experience, Tmall.com has started exploring offline sales, establishing 19 brick-and-mortar stores in major Chinese cities before the 6.18 event, allowing shoppers to actually see and feel the goods.

But some tricks employed during online sales festivals have met with criticism from customers as well. For example, some veteran shoppers noted that the discounted prices offered during the events were similar to prices seen on normal days, as the original prices are purposely raised during such special sales periods.

In addition, some companies that run stores on the online marketplaces don’t benefit from the festivals. Tech giant LeEco, which sells smartphones and smart televisions on both the Tmall.com and JD.com platforms, said it was forced to take on the costs of discounts and coupons they offered during the shopping event.