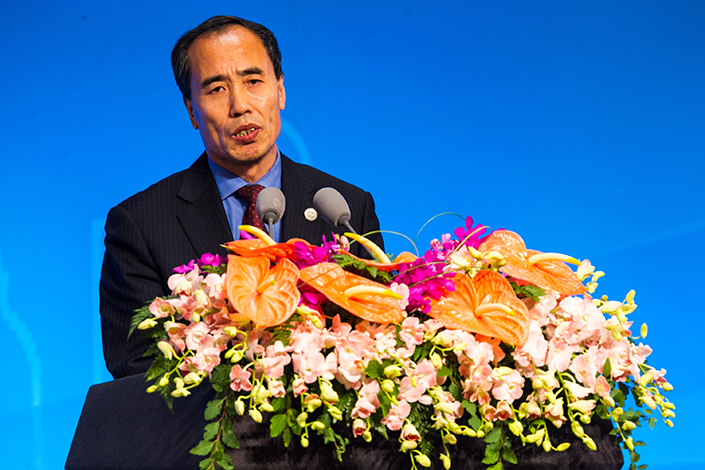 Wang Zhaoxing, vice chairman of the China Banking Regulatory Commission (CBRC), called for deep reforms to the banking sector at the Lujiazui Forum in Shanghai on Monday. Photo: Visual China

(Shanghai) — China banking regulators on Tuesday called for deep reform in the banking sector to ensure overall stability in the financial system, warning of mounting risks amid a slowdown in the world’s second-largest economy.

Wang delivered the keynote speech at the kickoff of the two-day Lujiazui Forum in Shanghai, where financial regulators and experts from home and abroad are focusing on financial reform and uncertainties in the global financial system.

“As the economy is going through restructuring and its growth has been under pressure to slow, the financial risks that have been accumulating may continue to surface,” Wang said. “Meanwhile, some new risks may also emerge, which could potentially undermine financial security and stability.”

China’s banking system is the world’s biggest in terms of assets. But risks have caught regulators’ attention in recent years.

Especially of concern is the expansion of so-called “entrusted investments” — assets that banks lend to external nonbank financial intuitions for bond, stock and commodity investments. Estimates of the amount of money parked in entrusted investments nationwide vary widely. Citic Securities’ high-end estimate was more than 19 trillion yuan ($2.79 trillion) as of December. Such practices have increased the amount of money leveraged in the system, causing alarm.

At Tuesday’s forum, People’s Bank of China Governor Zhou Xiaochuan echoed Wang’s call for banking sector reform and improving lenders’ corporate governance, risk controls and business assessment systems. These steps would not only make banks a pillar for shoring up growth of the real economy — the sector that produces actual goods and services — but also for maintaining financial stability, Zhou said.

The central bank chief said financial regulators should not tolerate high leverage, inadequate capital or non-performing loans. “Healthy” financial institutions are a prerequisite for guarding against a potential financial crisis, he said.

Jiang Yang, vice chairman of the China Securities Regulatory Commission (CSRC), called for coordinated regulation led by the People’s Bank of China to more effectively guard against systemic financial risks. Under a coordinated regulatory framework, financial regulators will be able to share relevant information and avoid overlap in the policymaking process, Jiang said.

Financial stability was brought front and center on China’s agenda by President Xi Jinping. On April 25, he chaired a group meeting attended by members of the Politburo to discuss “safeguarding national financial market security,” according to the state-run Xinhua News Agency. The topic is rarely covered at gatherings of senior leadership of the Chinese Communist Party, which signaled that top policymakers may step up efforts to clean up the financial system.