By Coco Feng and Shi Maling 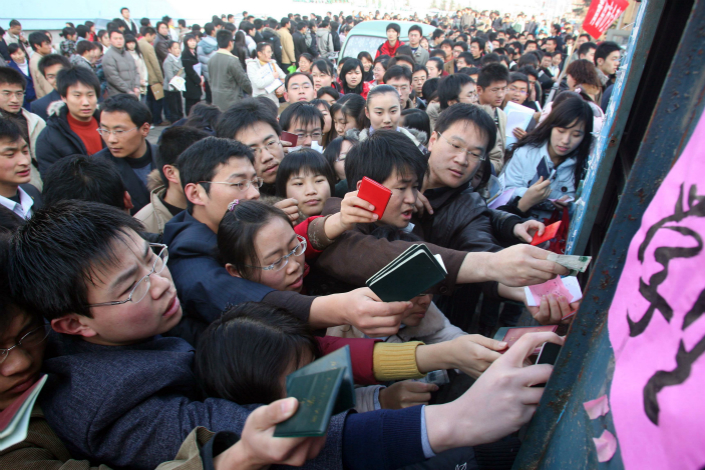 A raft of online lending services had allowed college and high school students to borrow small sums of money without a credit history or parental approval.

Microlenders peddling such loans had operated in a legal gray zone until Monday, when a group of regulators including the China Banking Regulatory Commission, the Ministry of Education and the Ministry of Human Resources and Social Security, published a directive on June 16 banning the practice of lending to students.

Under the directive, a limited number of authorized banks are permitted to issue loans to students, but to do so, they were ordered to conduct a strict assessment of the borrower’s creditworthiness.

China has been gripped by several high-profile scandals involving college students who had fallen prey to unscrupulous online lenders. In one such incident last year in Henan province, an undergraduate student jumped to his death after racking up 600,000 yuan ($87,000) in microloans. One lending service that allegedly asked female college students to send it naked photos as collateral caused outrage on social media in June 2016.

Online microlending services have mushroomed in China over the past few years, and regulators have been struggling to keep pace with their quick rise. About 2 trillion yuan ($300 billion) in microloans were given out by these platforms last year alone, according to industry information provider wdzj.com and consultancy Yingcan. A handful of these services target students. One such lender named Aiyoumi had given out 10 billion yuan in loans last year, according to data on the company’s website. Nearly 320 million applicants have requested loans from rival Mingxiaodai since the service was launched in 2013, Mingxiaodai said without revealing the total amount loaned.

Qudian, another lender that targeted young borrowers was planning an initial public offering (IPO) on the New York Stock Exchange to raise up to $1 billion.

The rapid growth of online lending services targeting students was partly due to a 2009 regulation that prohibited banks from lending or issuing credit cards to students. But qualified banks have resumed microloans to students this year with the Bank of China and China Construction Bank (CCB) rolling out student loans in May. CCB offers loans with an annual interest rate of 5.6%, whereas the average annual interest rate from online lenders was about 20%. In some cases, it reached 50%.

The government announced the country’s first-ever regulation to rein in the nascent online microlending sector in August. Monday’s directive was the latest move that specifically targets lending to students. But, it did not offer any details such as an age group to determine who qualified as a “student.”

The public reaction to the rule was mixed, with some saying it was time the government took action to protect students, while others said the unclear definition meant that even graduate students could be denied access to loans.

“I think students don’t have a proper understanding of the loan terms and the legal implications and consequences of defaulting,” said Joseph Good, a graduate student from Peking University.

Many of these lending services were sitting on sour loans, the state-owned Legal Daily reported, citing an employee from an asset management company.

“Some students take out microloans to buy essential school supplies and afford other necessary expenses,” said another graduate student from the School of International Studies at Peking University, who went by the pseudonym Lulu.

“Forbidding microlenders from loaning money to students might drive students to use other illegal channels of funding that the government can control even less,” Lulu said.