By Zheng Lichun and Song Shiqing 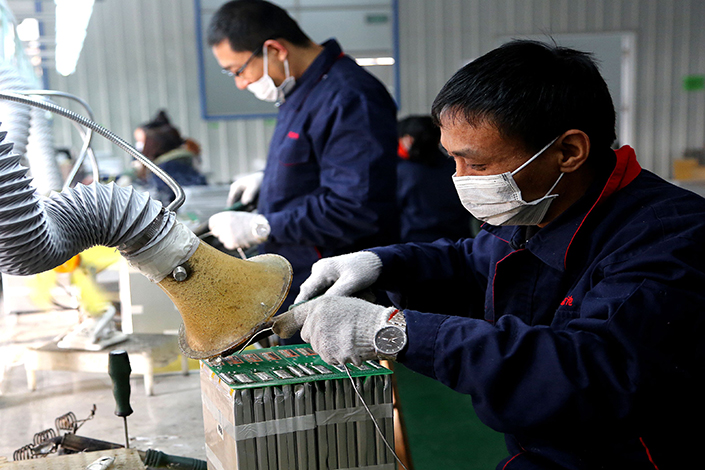 In 2011, domestic demand for power batteries — rechargeable batteries that power electric vehicles — was 1.6 gigawatt-hours (GWh), and the capacity of all power battery plants in China was 3.2 GWh.

Demand increased to 27 GWh in 2016, but capacity surged to as high as 101 GWh, data from the China Industrial Association of Power Sources showed.

“The increased capacity is created by local authorities,” said Fang Jianhua, president of Guoxuan High-Tech Co. Ltd., at an international summit Wednesday on the lithium-battery industry.

Beijing has identified the green-car industry as a development priority since 2012, rendering favored policies, including generous subsidies. As a result, local authorities have been keen to attract as many makers of electric cars and electric-car batteries as possible.

Another contributor to the capacity surge is regulation. Last year the central government moved to rein in the unregulated battery industry, requiring all manufacturers to have at least 8 GWh of annual production capacity to qualify for subsidies.

In fact, at that time, no battery manufacturers in China met those standards except for two leading players — BYD Auto Co. Ltd. and Contemporary Amperex Technology Ltd. — according to Liu Yanlong, secretary general of the China Industrial Association of Power Sources’ battery branch.

On the other hand, despite the industry’s excess capacity, there is a huge demand for high-quality batteries in the domestic market. Therefore, good battery manufacturers have often found their products easy to sell, China Automotive Technology & Research Center Vice Director Wu Zhixin said at the lithium-industry summit.

A recent report forecast changes in the domestic battery industry this year. Battery companies with advanced technologies and strong production abilities are likely to grow rapidly, while those with low productivity and poor safety standards will be weeded out, according to the publisher China EV 100.