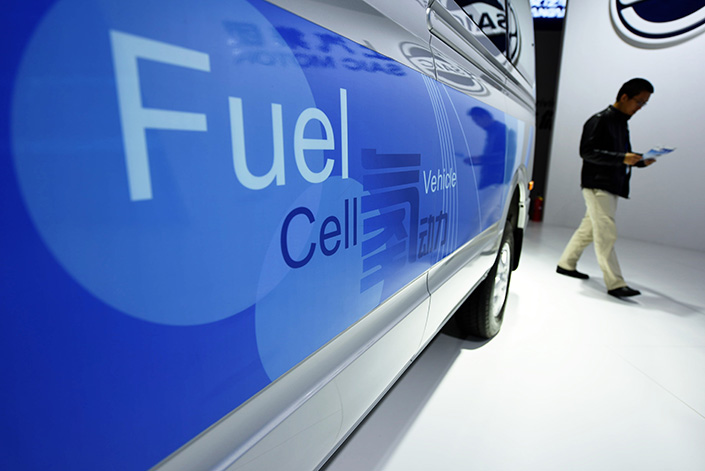 A visitor walks past a new-energy car at the China International Industry Fair in November 2016. Sales of new-energy vehicles plunged 70% in January, affected by seasonal factors and cutbacks in government subsidies. Photo: IC

(Beijing) — China’s new-energy car sales plunged in January as buyers and manufacturers took to the sidelines as the government restructured an incentive system that had been widely abused.

The country has embarked on an aggressive program to build up its new-energy car sector as part of a broader effort to clean up air pollution and develop cutting-edge technologies that can be exported. But generous subsidies meant to promote the industry led to widespread fraud among buyers and manufacturers.

The overhaul now underway was the main reason for the 74% plunge in January new-energy car sales to just 5,682 vehicles, according to data from the China Association of Automobile Manufacturers (CAAM). Production dropped by a similarly sharp 69.1%, to 6,889 units.

By comparison, sales averaged more than 40,000 vehicles a month last year, with total sales for the year amounting to 507,000 units.

The system received a major shock when manufacturers were informed at the end of last year that all of their vehicles would be re-evaluated for inclusion in a catalog of models eligible for subsidies. But the revised catalog, which previously covered 2,193 models from 235 producers, has yet to be published, leaving the industry in limbo.

“According to the rules, all products must first be included in the catalog, and only after that can manufacturers get subsidies for sales and promotions,” CAAM official Xu Haidong said. “The new catalog hasn’t come out yet, so manufacturers don’t dare to sell because if they do, they can’t receive any subsidies.”

Xu added that the uncertainty is likely to affect sales through February and March, but levels should rebound after the new catalog comes out. He predicted that overall sales should reach 700,000 to 800,000 units this year as clarity returns to the market when the catalog is released.

Others are less optimistic since the government is expected to reduce subsidies and eventually phase them out starting in 2019 to make the industry commercially viable. Also clouding the outlook are uncertainties surrounding separate subsidies from local governments, said an official at Anhui Jianghuai Automobile Group Corp. Ltd., speaking on condition of anonymity due to the sensitivity of the situation.

Many local authorities are under severe pressure due to shortfalls in fiscal revenue and, as a result, are rolling back their subsidies, the official said.

While China overhauls its subsidy system, it is also cracking down on companies that fraudulently obtained government money in the name of promoting new-energy vehicles. Earlier this month, seven electric-vehicle makers were punished after an investigation found they had less-powerful batteries than they declared when they applied for incentives.