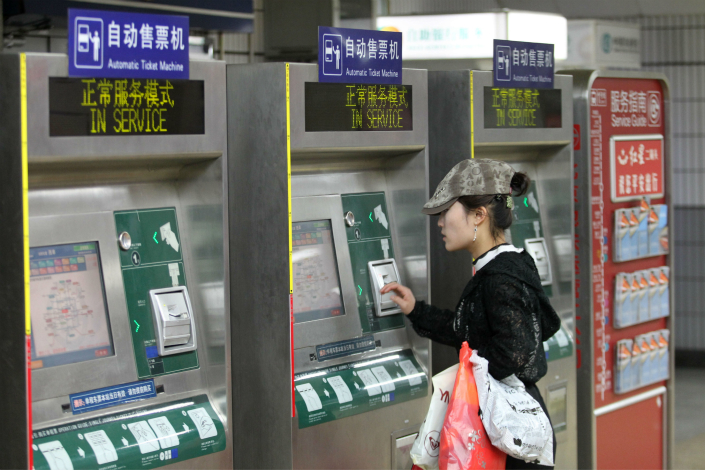 Beijing’s subway authorities are urging passengers to dispense with their transportation cards and committ to paying for fares with their smartphones. Photo: Visual China

(Beijing) — Beijing’s subway authorities are trying to get more people to use their smartphones to pay for metro fares amid the explosion in China’s digital payments market.

As far back as 2013, subway stations across the capital were equipped with the technology to accept mobile phone payments, but only 1 million commuters — a fraction of the passengers who take the metro every day — have used the service so far.

One reason for the feature’s low popularity is that it requires mobile phones to have a special SIM card with embedded NFC (near-field communication) technology.

Since last year, more phone makers have been adding an NFC component to their handsets. Now, there are more than 160 phone models that can be used for card-free payments and don’t require the user to buy a special SIM card.

NFC technology allows users to pay their fares by holding their phones up to the terminals where they usually swipe their transportation cards. The same technology is also used on buses and at some supermarkets and restaurants.

However, the service is unavailable for iPhone users because Apple doesn’t allow the NFC ports on its handsets to connect to third-party payment terminals, according to a statement by the Beijing Municipal Administration and Communication Card Co. Ltd. (BMAC), which manages the city’s public transportation cards.

Beijing Metro’s latest marketing campaign consists of posters and radio broadcasts at all subway stations on the Fangshan Line, which runs through the city’s southwestern suburbs.

The subway authority plans to collect data on the service to fine tune it, a BMAC employee told Caixin.

Users have encountered problems. “Payments sometimes don’t go through during rush hour,” said a man surnamed Lin, who has been using the NFC payment service for two months.

Another problem is that phone cases can sometimes block the NFC signal, said a commuter surnamed Ou.

Beijing is not the only city in China that has introduced card-free public transportation. Shanghai, Guangzhou, Shenzhen and Nanjing also allow commuters to pay for fares with their smartphones.