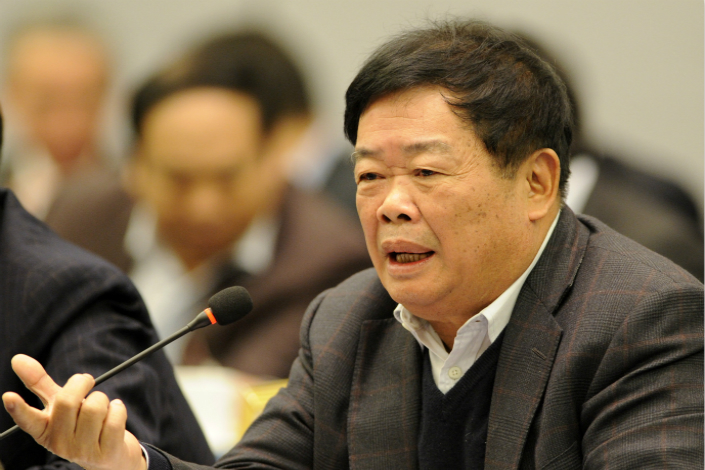 Fuyao Group Chairman Cao Dewang said his company will continue to invest overseas. “In order to maintain the security of the global automobile production supply chain, we need to build factories all over the world,” he said. Photo: Visual China

Automotive glass giant Fuyao Group has come under steady scrutiny over the last year, first in its native China and more recently in the U.S. The most recent controversy centers on the company’s new glass-making plant in the U.S. state of Ohio, where it has faced labor tensions and accusations of safety violations. Fuyao opened the plant to be closer to its customers, which include many U.S.-based automakers.

Before the latest controversy, Chairman Cao Dewang’s decision to build the North America plant sparked a debate in China over whether high corporate taxes in his native country were stifling growth.  Cao, a self-made billionaire who founded Fuyao in 1987, talked to Caixin in an e-mail interview about his company’s recent performance and the future of Fuyao’s operations abroad.

The following are excerpts from the interview:

Caixin: After making all of the adjustments at the Ohio factory, is it still more cost-efficient for Fuyao to produce at this factory for its U.S. customers than from a similar factory in China?

Cao: Production costs are not lower than they would be in China. But if you factor in logistics costs and transaction costs, China’s competitiveness takes a big hit.

In your last annual report, you said profit margins in China were about 44% compared with 39% in other countries. How is the profit margin at the Ohio factory trending, and do you expect it to improve, deteriorate or stay the same after the recent changes?

Here’s how it is. Last year, the Ohio factory was not in operation, so it was not factored into calculations for the entire Fuyao Group. Therefore, profit margins were a little higher. This year, the Ohio factory began production and was included in our calculations, but because the factory is still in the trial-production period and was losing money up until the end of May, the first quarter’s profit margin was affected and fell by a few points. What the future will bring depends on how the Ohio factory’s productivity and returns grow.

Will Fuyao continue to invest overseas, or will the company put more focus on investment in China and other markets after this experience in the U.S.? Where and when do you see Fuyao’s next major investment?

Fuyao is a globalized company. In order to maintain the security of the global automobile production supply chain, we need to build factories all over the world. We have already set up factories in Russia and the U.S. This year, we’re building in Europe and plan to finish construction by the first quarter of 2018. As to where our next investment project will be — I can’t reveal this at the moment.

What advice would you give to another Chinese company considering a similar expansion to the U.S. or Europe?

In this year’s first quarter, the company’s revenue growth slowed to about 17% compared with 22% for all of last year. Do you expect revenue growth to keep slowing for the rest of 2017? Can you give a forecast for all of 2017?

The slowdown this year is due to the fact that we are calculating from a much larger base than last year. Our absolute value has increased by 17%, and there should not be a large difference compared to last year. I don’t think this is a problem. As for the latter part of the year, I can’t tell you, due to restrictions on listed companies.

Last year, Fuyao’s China sales grew 21%. Many signals are showing that China’s car market will slow considerably this year. Do you think Fuyao can maintain the 21% growth rate in 2017? Can you give a forecast for China revenue growth this year?

On a nonconsolidated basis, the company’s revenue actually dropped 17% in the first quarter of 2017. Do you see more revenue contractions for the rest of the year?

The decrease in revenue was due to the yuan’s appreciation because Fuyao is an export-focused business. Whether this will continue in the rest of the year depends on how the exchange rate moves.