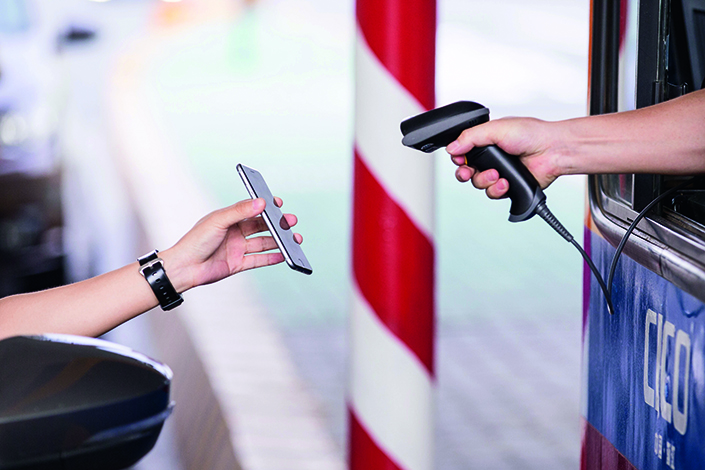 Central banks in many countries, including China, have stepped up efforts to research and develop their own sovereign digital currency and payment systems. Above, a driver pays a highway toll via Alipay in Hangzhou, Zhejiang province, on Sept. 21. Photo: Visual China

(Beijing) — When an unheard-of technology or service pops up, regulators usually ask themselves: Should it be banned, regulated or ignored?

Or should they adopt the technology themselves?

The idea of central bank-issued digital currency (CBDC) was born out of the last mindset. CBDC, first popularized by the Bank of England, is designed to be paperless legal tender backed and managed by the central bank.

Bitcoin debuted in 2008, and it has taken the world by storm ever since. Less-risk-averse law-abiding investors love this nonlegal tender for its convenience and borderless use. The hype had pushed the value of 1 bitcoin to as high as $3,000 earlier this year before it retreated to $2,491 on Monday, but has still more than doubled its value since the beginning of this year.

Despite the fanfare, virtual currencies are not backed by central banks, at least not yet. These cryptocurrencies essentially operate in a legal gray zone, triggering regulatory concerns over their involvement in money laundering and cybercrimes.

While tightening oversight on digital-currency trading, central banks in many countries, including China, have stepped up efforts to research and develop their own sovereign digital currency and payment systems. They hope new technology will improve the safety of online transactions and the efficiency of monetary policy, and above all, fend off disruptions to the broader financial system.

A new yet prudent race among central banks

“Major central banks around the world have all started promoting research on the issuance and circulation of digital currency,” said Yao Qian, head of a newly established Digital Currency Research Institute under the People’s Bank of China.

China’s central bank is among the first to research and develop sovereign digital currency. In December, the PBOC completed a trial run on a digital bank acceptance exchange. PBOC Governor Zhou Xiaochuan told Caixin last year that he expected to see both digital and paper currency in circulation for a long time to come.

Similar efforts to explore the future forms of money have also been underway in the U.S., Britain, Canada and other countries.

In 2015, the Bank of England prioritized digital currency research. In June 2016, Governor Mark Carney announced the bank had launched a pilot program aimed at creating a safe space for financial-technology innovations, including a digital currency.

Sveriges Riksbank, Sweden’s central bank, launched a two-year digital currency research project in November. The bank said it will decide whether to issue CBDC by the end of 2018.

Central banks by nature have been cautious and prudent in exploring a new virtual-cash system. Officially backing bitcoin-like cryptocurrency would likely bring highly disruptive effects to the financial-services sector, as it would upend existing payment systems and reshape commercial banks’ relationship with their customers as well as with the country’s central bank. A borderless virtual currency would also change the way central banks carry out their monetary policies.

What China’s central bank has done

In January 2016, the central bank said its experts were working with Citibank and Deloitte Touche Tohmatsu Ltd. on a general framework for a digital currency. Later in December, the central bank completed its first trial run on a digital bank acceptance exchange, based on internal research conducted earlier in the year. The trial run tested a platform that handles transactions and settlements of bank acceptance bills with the digital currency the PBOC developed. The platform, connecting the central bank with several commercial banks, is supported by blockchain technology — a secure digital ledger that records online transactions.

During the same month, the central bank established its Digital Currency Research Institute to lead the development efforts. Then in May, the bank set up a committee to enhance its research on advanced financial technology and regulatory approaches.

On June 15, the PBOC clarified that it has not launched a digital currency. The bank said recent market speculations that it has done so could be a result of fraudulent schemes, or pyramid schemes, aimed at profiteering.

Yao from the PBOC’s Digital Currency Research Institute added that the central bank hasn’t decided whether, let alone when, it will launch an official digital currency. The decision will hinge on technology development as well as the public’s attitude toward payment methods, Yao added.

According to a 2016 report issued by the Bank of England, if a central bank were to issue a digital currency with circulation equivalent to 30% of an economy’s gross domestic product (GDP), the GDP could be boosted by as much as 3%. That is because a digital currency lowers real interest rates and reduces distortionary taxes as well as monetary transaction costs.

Many central bankers and scholars have argued that central banks would gain more ammunition in fighting against economic crises and depressions if they were to have their own digital currencies. At a March conference in Hainan province, the PBOC’s Zhou said digital currency would boost the effectiveness of a negative interest-rate policy through boosting growth and inflation.

But concerns about a digital currency are still out there.

In March, U.S. Federal Reserve Governor Jerome Powell warned that digital currencies are vulnerable to cyberattacks and criminal activities. Central banks would need to keep track of digital currency issuance, although that would also give rise to privacy concerns, Powell said.

Last year, Ben Broadbent, a deputy governor of the Bank of England, said his top concern is the digital currencies’ impact on the financial system. He said the issuance of digital currency would take cash-based deposits away from banks and impair their ability to make loans.

“If bank loans become scarce or more expensive, it's likely that investment and economic activity would suffer,” Broadbent said.