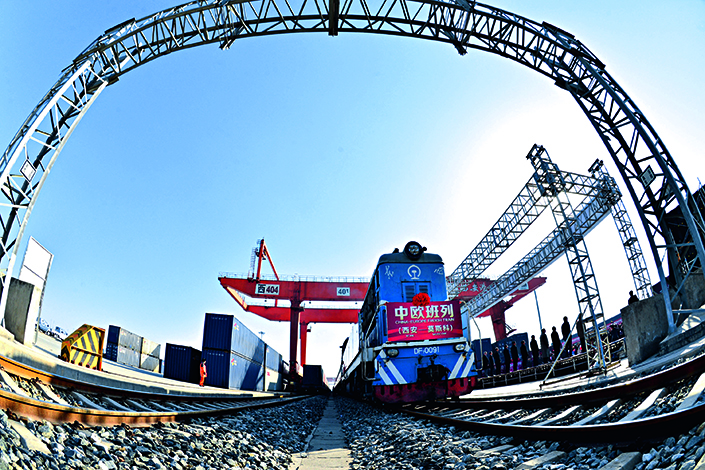 It is one of the hundreds of freight trains that now travel between China’s major cities and Europe each year, bearing goods like laptops, clothing and car parts.

Hundreds of routes now connect stations in cities like Yiwu and Wuhan with destinations as far away as London and Duisburg, Germany, and are part of a network loosely overseen by China’s national railway company, China Railway Corp.

But despite these trains all running as part of the intercontinental China Railway Express, the network they belong to is far from unified: The network is subsidized and directed by local railway companies and city governments, and there is little coordination.

For example, a mostly empty train returning from Europe to Chengdu doesn’t merge its cargo with another heading to nearby Chongqing at the same time because of a lack of communication between the Chengdu and Chongqing route operators, Zhang Hong, a logistics company staffer based in northern China, told Caixin.

The product of negotiations between HP and Chongqing municipal authorities, the westbound train passed through the Xinjiang autonomous region and arrived in Duisburg after 16 days.

In the six years since the inaugural journey of the Chongqing-Xinjiang-Europe Railway, also known as the Yu Xin Ou line, Chongqing has become the world’s largest laptop-manufacturing hub, accounting for 1 out of every 3 laptops in the world, due in large part to its rail link with Europe.

Other inland cities like Chengdu, Zhengzhou, and Wuhan have rushed to replicate Chongqing’s rail experiment. Inland cities were the earliest to join the rail network because they were eager to break their traditional dependence on coastal cities’ seaports for international trade, said a staffer from Wuhan Asia-Europe Logistics, the operator of the Wuhan-Xinjiang-Europe freight train.

But China’s coastal cities didn’t wait long to jump on the bandwagon. Yiwu, a Zhejiang province manufacturing hub for small commodities, opened the world’s longest railway line when it sent its first train to Madrid in November 2014. The first Europe-bound trains set off from Xiamen and Guangzhou in 2015 and 2016 respectively.

Multiple managers of China Railway Express routes told Caixin that while routes are managed by different combinations of state-owned, private and foreign enterprises, all are built on large subsidies from the local governments at their Chinese stations of origin.

“Initially, no one knew how to run a train line to Europe, and they also didn’t know where the potential clients were,” the Wuhan Asia-Europe Logistics employee told Caixin.

Moving goods to Europe by rail is faster and more expensive than sea transport, but cheaper than air freight services. In order to attract customers to their new rail freight links, local governments lower transportation prices with subsidies.

In the first few months that Europe-bound trains were running, “some of the subsidies came up to more than half the operating costs,” the Wuhan railway employee said.

But as the trains started running more frequently, customers began to realize the unique advantages of rail transport.

Moving automobiles by rail rather than by sea reduces transportation time by 25 days, and train arrival times are easier to predict and control, said Meng Qingwen, general manager of HAO International Logistics. HAO is in talks with Volvo AB about a three-year contract.

In the first quarter of this year, 593 trains departed from 28 Chinese cities and arrived at 29 destinations in Europe. The total was 187% more trains than the same period last year, according to China Railway figures.

But despite its rapid growth, China Railway Express still accounts for a relatively small portion of China-Europe trade — the 42 million tons transported by rail to Europe last year pales in comparison to the more than 100 million tons moved on sea routes each year.

For low value-added products, sea freight, which costs less, is still the favored option. Also, many clients are unwilling to take risks with a new transportation link and prefer to use mature sea and air transportation routes, Zhang said, adding, “It’ll take time to cultivate the market and change customers’ attitudes.”

At the moment, something as simple as a customer asking about Beijing-to-London rail freight services could cause major problems for agents like Zhang.

At the moment, goods bound for the same European destinations are not accumulated at a main loading station, but instead frequently travel on multiple trains running on nearly parallel routes — a highly inefficient transport model.

Additionally, China Railway Express operators sometimes refuse to take shipments between stations on their lines that don’t enter China, Zhang said, giving the example of a client that wanted to move goods from Germany to Kazakhstan on the Zhengzhou-Xinjiang-Europe (ZXE) line.

The problem is that individual China Railway Express lines are backed financially by local governments primarily interested in promoting their regional economy, said Bai Ming, deputy director at a Ministry of Commerce research institute. These governments have little incentive to promote trade between other countries.

Allowing each line to be run by a different local operator has also caused problems for the lines themselves. The ZXE line has five or six westbound trains each week, but only one customs documentation office, so every ZXE shipment needs at least one week to clear customs — an issue that could be resolved if lines were to cooperate to handle documentation.

As the central government continues to promote the “One Belt, One Road” initiative, China Railway has pushed harder for integration across the China Railway Express network, shrinking local government’s sway over individual lines.

Since 2014, the national railway company has called multiple meetings of China Railway Express operators at which it discussed implementing unified branding and pricing systems.

But it’s taken a long time to get local railway operators on board. Before the coordinating committee was set up on May 26, local operators were wary of China Railway and feared losing control, an employee of a regional operator told Caixin.

“But later, through communication between China Railway and local governments, and visits by China Railway’s deputy director Guo Yuhua to local operators, the committee was finally established,” the employee said.

“Achieving these 10 goals could revolutionize the way the China Railway Express is run,” he said.