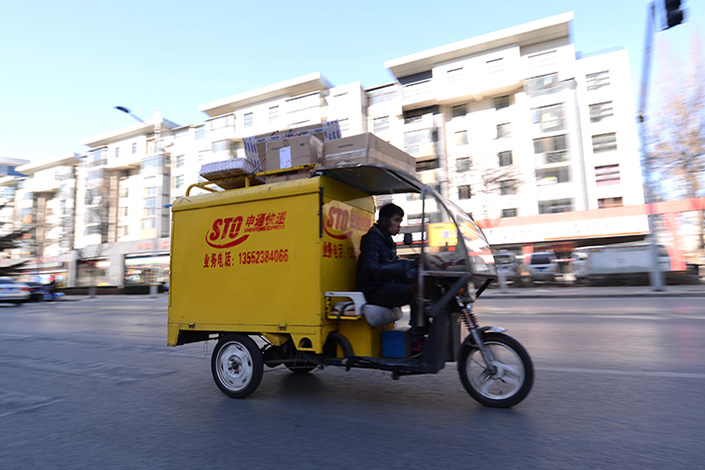 Chinese netizens have been debating an online post by an STO Express customer, who said that a company deliveryman hit her on the head with a rock after she complained to STO that her parcel was missing after the deliveryman said she had signed for it. Above, an STO deliveryman, who is not the one accused, rides through Beijing on Feb. 8, 2015. Photo: Visual China

Chinese netizens are debating the role of delivery personnel in the country’s booming e-commerce industry after a Beijing deliveryman reportedly attacked a customer on Sunday after the customer complained to the deliveryman’s employer about a missing parcel.

The discussion was triggered on Tuesday by a post by a Weibo user identified only as Bingqilingmiaomiao, who said an STO Express deliveryman entered her apartment on Sunday and hit her on the head with a fist-sized rock, drawing blood.

Bingqilingmiaomiao said she had recently lodged a complaint against the deliveryman for marking the missing parcel as “delivered and signed for” on STO’s online system when she had actually been out of town on a business trip, the user said.

Bingqilingmiaomiao also said that STO, one of China’s largest private delivery companies, had not responded to her reports about the incident in the three days since the attack.

The deliveryman in question has since been fired and detained by police, according to the Chinese-language publication The Paper.

Chinese netizens had mixed responses to the attack, which was a trending topic on Weibo on Wednesday afternoon.

Many condemned the deliveryman’s actions, but also criticized Bingqilingmiaomiao’s reporting the undelivered parcel to STO, pointing out that it is common for delivery personnel to leave parcels on doorsteps if the recipients aren’t at home to sign for them.

Others highlighted the long hours and stressful conditions that delivery personnel work under. “A deliveryman was fined 200 yuan for seemingly no reason. Maybe he can’t even make that much after a whole day of hard work,” one Weibo commenter wrote.

Delivery workers traveling on scooters loaded with parcels have become a common sight in China’s major cities in recent years as the country’s e-commerce industry has grown. A total of 30 billion parcels were delivered in China in 2016, according to the State Post Bureau.

The average Chinese delivery worker is a male who is 20 to 30 years old, according to a paper on third-party logistics firms published last year by AliResearch, the research arm of e-commerce giant Alibaba Group Holding Ltd.

Over 80% of delivery workers earn less than 6,000 yuan a month, the report said.